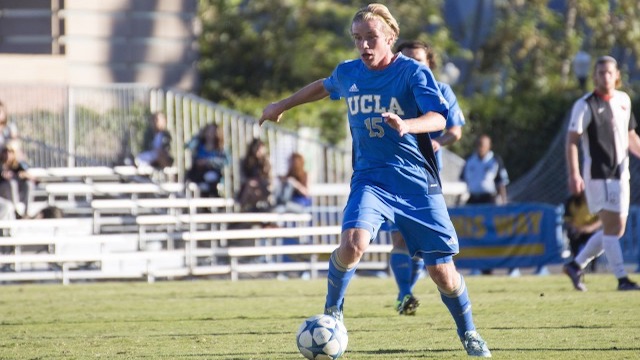 Jackson Yueill grew up hundreds of miles from the nearest MLS team. Born in St. Paul, Minnesota and raised in nearby Bloomington, Yueill never felt the warm glow of the league’s benefits: an imbedded scouting framework around a local pro academy, pro games to attend as a kid, the natural exposure.

Yueill thrived anyway. He hitched up with the Minnesota Thunder academy, which puts teams in the Development Academy, and his talent helped him cut through to the marrow of U.S. Soccer’s youth national team system anyway. He was first identified at a U14 camp in 2010 but fell off the radar until rejoining the YNT pipeline as a U18 in 2014.

Yueill quickly became one of the most coveted recruits for the 2015 boys class. As a four-star midfielder with skill to burn and meaningful U18 and U20 MNT experience on his resume, Yueill spent 2013 and 2014 becoming a national name on the college circuit. Offer letters flooded his inbox, and soon he’d narrowed his choices to four: Creighton, Wake Forest, North Carolina and UCLA.

“It was kind of hard picking between those four,” Yueill said. “It kind of came down to the wire for which one.”

The wire, though, is strung up a bit differently in college soccer recruiting. Yueill made his decision during his junior year in high school.

Ultimately, the sun and exposure at UCLA won the day, and today Yueill’s regrets are nonexistent. He recently polished a freshman campaign that won him a first team All-Pac 12 selection and a first team nod for the TopDrawerSoccer.com Freshman Best XI side after putting in seven goals and six assists in 1,560 minutes. The Bruins couldn’t replicate their 2014 run to the NCAA title game, but Yueill certainly did his part. In a few months he became one of the biggest names in all of men’s college soccer. It would not be a surprise to see him land on a Generation adidas list in a year or two.

Yueill embodies a growing segment of the U.S. player pool in that he’s caught between mammoth life decisions. Never before has professional soccer provided so clear a pathway, and yet college soccer can still offer things the pros can’t: stability, education, peer-based leadership.

Yueill labored over his college decision, but in truth the pro offers weren’t exactly streaming in. Without an MLS club in his area (the NASL does have a presence in Minnesota United FC, which will join MLS in a year or two), Yueill never had a Homegrown pathway open to him, and MLS clubs outside his Minnesota footprint weren’t wise to his game.

So college it was. And even though criticism has grown around the college vs. pro debate - certainly some of it warranted - Yueill has no regrets.

“College has really helped me a lot,” Yueill said. “I think the piece that I’m missing still is the maturity level. I think coming to college, you’re still with a similar age to yourself, so when you get here you can start becoming a leader more. When you become a leader, your maturity level grows, and with that your playing level grows. You’re kind of the sole guy who’s running stuff. That’ll increase your game. I know college isn’t a professional environment, that the game isn’t the best compared to other leagues in the world, but I think it’s however much work you put in. If you continue playing hard, putting in the work, your maturity level will grow. I think that’s the biggest component college has helped me with.”

Players talk. It’s inevitable that during national team camps, teammates share life experiences and goings on in their own club situations. This takes on an heightened sense of importance in youth national team camps, when players are still figuring out how to pick a pathway forward. Yueill said players get plenty of advice - if they want it - from their YNT coaches on things like picking agents and offering advice on which avenue to pick, but ultimately the decision is down to the player.

And it isn’t that Yueill was warded off pro soccer as an 18-year-old by what some in his youth national team cohort shared with him, but it certainly didn’t sway him that he’d made the wrong decision.

“A few of them think they might have signed a little too early,” Yueill said. “They think they maybe should’ve waited, that maybe they should’ve tried to go for European clubs, because with MLS they’re stuck with the second division team and not getting many minutes. A few of them aren’t really happy with their contracts.”

One of the reasons so many boys college recruits make their decisions early, thus making Wednesday’s Signing Day more of a formality than its other college sporting cousins, is because there are other options. If a recruit like Yueill commits during his junior year while continuing to compete at the U.S. YNT level, there’s a chance a pro club - whether here or abroad - catches on and offers him a contract. Whether he accepts or not, there’s a sense that college players are simply keeping their options open.

While featuring for the U17 MNT, Palmer-Brown signed a Homegrown contract with SKC in 2013 at the age of 16. Palmer-Brown didn’t play much for the first team, but promising stints for the academy and good form for his youth national teams helped him climb the ladder. The club even reportedly shut down a $1 million transfer bid from Juventus in 2014.

Earlier this week, SKC confirmed Palmer-Brown had been loaned to Portuguese mega-club Porto for the remainder of 2016.

Those avenues were open to a player like Palmer-Brown, who’d been with SKC for four years before he was signed and pushed into the international limelight. Yueill didn’t have the same luck. Still, there’s little doubt that Yueill’s made the most of his time at UCLA so far, and while his path to the pro ranks might be a bit more circuitous than some, most have little doubt that he - and the legion of players in the system like him - will get there eventually.

“I think for me, it was just the next step, the allure of just going to college,” Yueill said. “Going to the NCAA was just the next step for me. The allure of that was kind of just getting to the next level of being seen more. Going to not a professional environment, but more of one, where I have the ability to stand out more. I’m trying to go to a place where you’re able to be seen, so when you do well, you can make the transition to professional.”