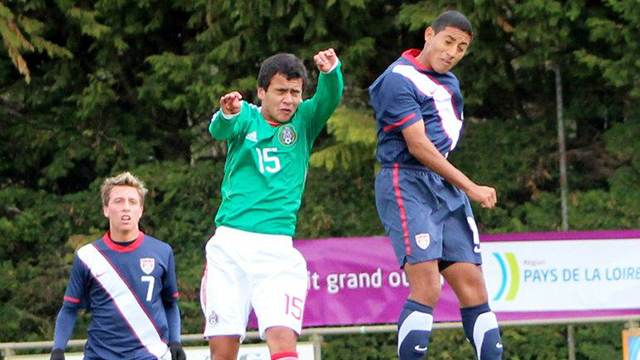 In early April, the U.S. Under 17 Men’s National Team went abroad to play for the first time in 2012.

Head coach Richie Williams took 18 players from the U.S. Residency in Bradenton, Florida to the Mondial Minimes Tournament in Montaigu, France, where they finished fifth in the 12-team competition.

The trip was significant for a number of reasons, but perhaps none more so than it being Williams’ first trip in charge of the U17 MNT since taking the job in January of this year.

“It was my first experience with them on an international trip and playing against international competition,” he told TopDrawerSoccer.com. “I thought they did really well, the four games were very good games for us. Results were good, I thought we played good soccer against some good competition and I think it was a great environment for us to be in in terms of getting international matches.”

Across four games, the United States posted a 2-1-1 record against opposition like Japan and Portugal – wrapping up the tournament on April 9 with a 1-0 win over Mexico.

Looking past the results, from Williams’ perspective, he was pleased to be able to test his group against other international teams from around the world.

He sees that as one of the most important aspects to his team’s progression.

“I just think the more games our players can play against international competition, it’s going to be great for their development,” he said. “We had an opportunity to play four international games, we got a day off between each match, we had our first group, the main group, played in the first two games and our second group played the third and we had a little bit of a mix in the fourth game due to some injuries.

“Our objective was to get these guys through these games, and for me to see them all of them play against international competition and kind of the way that we play, see which ones can play at that level, at a high level. I thought they did very well, we were very happy as a staff at the end of the tournament.”

The two youngest players in the team, midfielder Cameron Lindley and center back Tommy Redding, both born in 1997, earned praise from Williams after carrying their strong form from Florida to France.

“They came in and really impressed me in our trainings and our practice games in Florida,” he said. “And then to see them now take their game and even take it to a higher level against international competition, I thought the two of them did very well considering they’re a year younger than everybody.”

Over in France, the U17 continued to use the 4-3-3 formation that is becoming something of a hallmark of the U.S. youth setup. However, Williams was adamant that he would explore different lineup options if he felt the need arises down the road.

“We play a 4-3-3 just because at the time we feel it suits our team the best in terms of the players that we have,” he said. “We don’t have two real strong center forwards so it makes most sense to play a 4-3-3. Going forward we could play in a 4-4-2 with a diamond in the midfield if we feel that’s going to allow our team to play better.”

But for now, the current option remains the focus of this team, as it’s been the main formation this group has used in 2012, and likely won’t change as preparations for the 2013 U17 World Cup cycle continues.

“We’ve been playing mostly in a 4-3-3 throughout the semester,” Williams said. “We had to go over some things with them in terms of having them understand what we’re looking for in it, and their positioning and that sort of thing. They’ve grasped it pretty well and I think it suits us pretty well right now.”