Stars emerge in U.S. U14 scrimmages 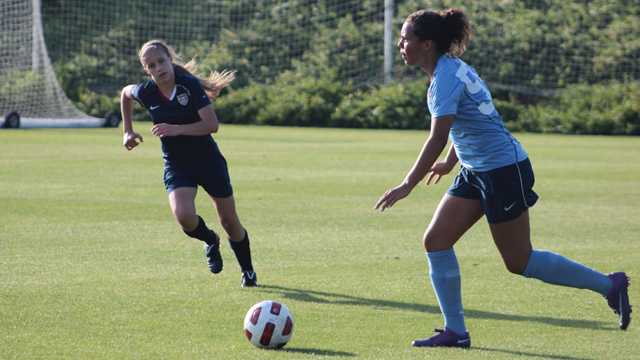 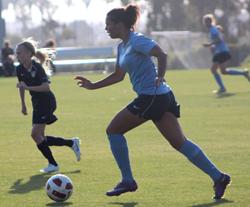 That’s what U.S. Soccer Director of Women’s Development Jill Ellis wanted for her U14s, and it’s the reason the group has gathered this week for the first of three trainings this year – as opposed to one large identification camp in years past.

Ellis’ desire for more quality time with her pupils seems to already be paying off. Whereas previous U14 camps appeared more orientation than valuable training, Wednesday’s action showed off a group of young players competing with conviction.

The 48 standouts were broken into four sides for a pair of intrascrimmage games, and the results were undeniably positive.

“In both games we saw players trying to play our style tactically,” Ellis said. “We want to implement that as early as we can – playing out of the back, building in the midfield – and I definitely saw that intent today. The execution sometimes breaks down but it’s the willingness that makes me pleased with the performance.”

Madison Schultz, a strong striker from Washington who played with great pace, had to be one of the more pleasing performers. Schulzt played on a dark blue squad that included an attacking core of Sunny Dunphy, Kaitlyn Bryan, Nicole Whitley and Jordan Harr.

Schultz was clearly the most dangerous of the bunch, and her teammates sought her out as she scored two goals in a scrimmage that ended in a 2-2 tie.

On the light blue side, right back Zoe Morse of Michigan was one of the more intriguing players. She’s tall, poised and is left-footed – something Ellis indicated the U.S. coaches would be seeking out for this age group. Morse competed well in the air and always seemed to get her feet on the ball, saving a lot of possessions for her team.

Teammate Madison Haley of Texas was also a dangerous player on the outside and made a few dynamic runs.

Frankie Tagliaferri of PDA drew a penalty kick and converted for light blue late in the second half to get the final result.

In the second match, midfielder Jenna Bike of Connecticut was the player of the match. Bike played with superb confidence and drilled a picture-perfect 25-yard goal for the game’s only score.

Julia Bingham of Arsenal FC in California was another standout as an outside back as she was great on the ball and made life difficult for the light blue side.

“This was by far our best showing from the camp so far,” Ellis said. “The first national camp experience is always an anxiety-ridden experience for players. You try to make them as comfortable as possible and tell them to just come in and be free and confident.”

And with additional meetings this year, the message will have more time to sink in.

“We’ll meet again in August and have a follow up in October,” Ellis said. There will probably be new faces in the next camp and the final one we’ll get a chance to bring in the best from the two.”