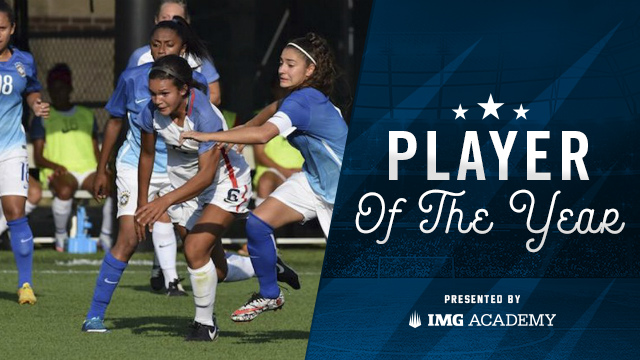 The TopDrawerSoccer.com Player of the Year Award presented by IMG is about to hit the summer straightaway. Which means finalists are beginning to crystalize in advance of the all-important playoff season.

As a reminder of the rubric, the TopDrawerSoccer.com Player of the Year Award presented by IMG will award its second two winners this August. Taking into account the top performances from the very best amateur American players, the honor will be bestowed on one girl and one boy each who best exemplify the rising tide of American soccer. Through a panel of judges carefully curating these performances over the course of the year, we’ll make an informed decision about the best seasons from the best players.

The award, the most prestigious yearly honorific for amateur youth players with U.S. ties, will honor one top girl and boy player each at the conclusion of each season. Announced each August following a July 31 cutoff, the award takes into account the player’s body of work over the previous season and will be picked by an internal panel of judges.

With that in mind, here are two more candidates who’ve made their presence known this season.

Among those players who’ve spent this season putting together impossible-to-miss resumes, Josh Sargent is perhaps head and shoulders above them all.

Sargent’s YNT season is without peer. He started the year, as he had before, as a member of the U17 MNT residency program in Bradenton, Fla. He started the year as a highly prized if slightly under-the-radar forward for the U17s, but that changed rapidly in U17 World Cup qualifying. He ultimately scored five goals in six qualifiers, which opened the door to a U20 World Cup call-up two weeks later. There, he scored three goals in his first two games. Doesn’t get much more diversely productive than that.

Sargent, the No. 1 player in the 2017 boys class, obviously doesn’t have the club resume this season because he hasn’t been with his SLSG club. The U17 residency program served as his club home all season, but his youth national team performances more than make up for that in the assessment process for the award. Sargent’s largely been tipped for a professional contract down the road, and the rumors insist that he’ll likely find a home somewhere in Germany once he turns 18 next year. Until then, Sargent remains perhaps the best USYNT prospect anywhere.

The Real Colorado pro prospect assembly line is perhaps the country’s most impressive the past couple years. The most stirring evidence of that is obviously Mallory Pugh, but there are scads of top quality pro prospects from Real Colorado teams currently in the system. Sophia Smith might be the latest in a long string of recent successes, but she might also be one of the best.

Smith, the No. 2 player in the 2018 girls class, has been on an absolute scoring tear for Real Colorado’s U17 team when she hasn’t been away at various youth national team camps. As if to drive the point home in one of her most recent matches, she scored three goals and assisted on a fourth in a massive 6-1 win over the Seattle Reign academy on April 23. Real Colorado’s U17 team has been absolutely rampant this season in a run that includes an eyewatering 15-0 win. In that game, Smith scored seven goals.

That of course doesn’t even take into account her massive year on the youth national team scene. Smith made the roster for the U17 WNT in the World Cup last year, and afterward she immediately made the move up to higher rungs. She was called into a U18 WNT camp, then a U20 camp, and then a U23 camp. She’ll be in the U20 cycle moving forward for the next World Cup, but suffice it to say, U.S. Soccer wants to fast-track her development. She’s that good.

Here's a smattering of other players also in consideration for the TDS Player of the Year Award presented by IMG.