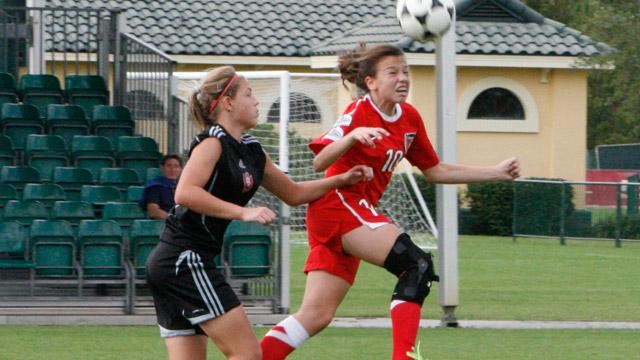 LAKE BUENA VISTA, FLORIDA – Sunday was a good day for Dallas Texans at the Disney Junior Showcase for Girls.

The club captured titles in the top flight of both the U13 and U14 age groups here at the prestigious tournament. Tim Bennett coaches both squads, although Texans’ Girls’ Director of Coaching Ryan Higginbotham deputized for him with the U14s as both finals were played at the same time.

The U14 Texans defeated GSA Phoenix of the Atlanta area 4-0. Brittany Crabtree scored the opener on an assist from Emily Bates after a great ball out of the back by Bailey Hierholzer. In the 2nd half, Brooke Hartsock hit a bullet cross and Bates headed home expertly to make it 2-0. Just a couple of minutes later, Bates ran down the right with the ball and played a square pass on the fly to Lauren Bruffet who knocked it in for a 3-0 score. Desiree

James provided the final scoreline of 4-0 when she finished a setup by Hartsock.

For the U13s, Dominique James, (Desiree’s sister) scored a late winner in a 2-1 victory over Charlotte Soccer Academy. Natalie Gonzalez also scored for Texans while Megan Owens scored for Charlotte.

The two teams collected their medals and trophies and gave us a little shout-out at the Disney complex:

Another Dallas team, Kevin Smith’s Solar SC squad, won the U13 Boys Showcase with a 5-0 shutout in the final of Ohio Premier. Jacob Hernandez scored 4 goals and Jackson Morse added 1.

Smith talked to us about his philosophy of development, but was interrupted with an icy surprise from this team.

In the U14 Boys Showcase final, Baltimore Bays held off a spirited Chicago Fire team 3-2. Bays got 1st half goals from Donald Benama (2) and Chris Haskins. Carlos Lujan scored for Chicago in the opening half. Bays had a number of breakaway and otherwise great scoring chances besides their goals in the 1st half, but kept missing the target. When Zac Bailey scored for Chicago in the 2nd half, a comeback looked very possible, but Brandon Quaranta’s Bays’ team held on for the win.

The coach didn’t get the soaking Smith got, but talked about his team afterward.

Just a reminder, we don’t cover team competition younger than the U13 age group.