Tanner Thompson was a part of the Hoosier family long before he ever committed to Indiana.

And for the record, he did verbally commit there this past fall. When he did, he joined a legion of family members before him all of whom graced the Indiana campus. 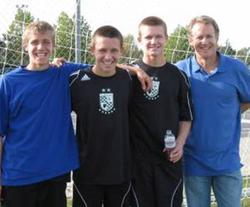 And just for good measure, guess who else will be joining Tanner at Indiana? (Grandmother? Aunt? Family poodle?)

His father, Gregg Thompson, was a part of Jerry Yeagley’s first National Championship team in 1982. Tanner’s mother also attended, as did cousin Bobby de St. Aubin who helped the men’s program reach the College Cup in 2000.

Both Thompsons are Blues (NorCal) standouts and Top 150 players in their respective class.

“Tommy and I have played together for a long time and we decided to go to the same school because we love playing with each other,” Tanner said. “He’s a great forward who scores goals and also holds the ball up and gets players involved around him. I’m an attacking minded player who runs at defenders and plays off of (Tommy) well.”

The brother duo will get plenty of opportunities to play off each other as well as their family tradition.

Both are planning to attend Indiana early with Tanner slated to graduate in December - so he can play with the program in the spring of 2013 - and Tommy attempting to graduate an entire year ahead of schedule then joining his brother in the fall of  2013.

While some siblings prefer to go their own way, the Thompsons are branching out together as extensions of their family tree.

In other news, Wesley Schrock (Shattuck St. Mary’s) has verbally committed to Liberty for the 2013 season.

Indiana was also a program on Schrock’s radar at one point as he attended their summer camp a couple years ago.

Schrock has alternated between midfielder and defender at various points in his career, and was a U.S. Club Soccer champion with the Chicago Magic back in 2010.