Columbia had the perfect pitch to lure standout Adam Najem to their program. In fact, it was so good they didn’t even have to solicit it.

Their secret weapon was an inside guy who knows Columbia and Adam just about as well as anyone on the planet … his brother, David. 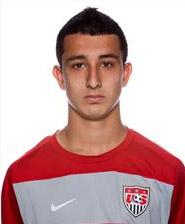 David, a skilled midfielder who is two years into his career with the Lions, made Columbia a logical fit for Adam – until that is, he committed elsewhere.

Younger brother went his own way, last month giving his verbal commitment to Akron for the 2013 season. So much for the perfect pitch.

Adam, now a member of the talented Akron family, is ranked No. 7 in the 2013 Top 150.“(Columbia) is one of the schools I was looking into,” Adam said. “They are all great programs, but my family and I came to the conclusion that Akron was the best fit for me.”

Like his older brother, Adam is a bit-sized midfielder with quickness to boot. He was in the U.S. U17 Residency Program last year and is a New York Red Bulls U18 Development Academy team regular.

Adam sees a lot of himself in Caleb Porter’s brand of soccer and is looking forward to joining fellow commits Fernando Pina, Dillon Serna and Andrew Souders.

“I know all those guys, and they are adding onto a great group of guys that are already at Akron,” Adam said. “I really felt like Akron could bring out my abilities as a player because their style of play is something I could really fit well into. I know that the program will help me improve as a player.”

As it turns out, MLS is a pretty good recruiting angle too, and each season, as the Zips donate loads of talent to the professional ranks, young players take notice and hitch their own dreams to the Akron wagon.

In other news, Real Salt Lake (AZ) star Ive Burnett has verbally committed to South Carolina for the 2013 season. Burnett is ranked No. 82 in the Top 150 and is yet another big get for the program.

Also, Sebastian Scales, of Eastside FC, has given his verbal commitment to Cornell for the 2013 season.