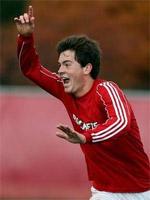 Adam Pohlman is a two-sport star.

A standout for FC Magic 95 at the club level, Pohlman also excels in two sports at Neenah High School. Along with playing soccer, he’s a point guard for his basketball team, rated by some as the best passing guard in the state.

However, Pohlman recently made a decision to commit to Wisconsin-Milwaukee based on his soccer abilities.

“I decided to commit to UW-Milwaukee because it felt right for me and my family,” he told TopDrawerSoccer.com. “The first day I stepped on campus and got to tour it, I really loved what I saw and knew that I wanted to play here. I also really get along great with coach [Kris] Kelderman and [Kyle] Zenoni.

“I know they will get much more out of me than I could get out of myself. They want the best for me and put education first. At the end of the day, it was just the right place for me and I am extremely excited.”

Of course, people were encouraging Pohlman to wait on his commitment because of his basketball. But he felt that it was the right move to make, and the work of Kelderman also impressed him.

“The soccer program at UWM has a great tradition of excellence,” Pohlman said. “Coach Kelderman, being that it's his first year as head coach, has had a great first year and it can only get better.”

That being said, Pohlman is still considering the possibility of playing both sports, perhaps trying to walk on at school. However, he'll defer to his coaches before making any sort of decision.

When it came down to making his college commitment, Benjamin Jacks was looking for the right team fit when weighing his options.

That led him to one of the rising powers in the Southeast.

“I committed to Coastal Carolina because they were looking for a wide player that is skillful enough to beat players one on one and athletic enough to out run defenders,” Jacks told TopDrawerSoccer.com. “The role fit me perfectly since I love taking the ball up the wing and either going in on goal, or looking for combinations that will get the ball in the back of the net.”

A program that has certainly been trending upwards of late, Jacks was also impressed with the program’s style of play, coaching, and what he determined was a professional-type atmosphere.

“Coastal moves the ball very fast and looks forward constantly,” he said. “They know how to work the ball up the sides, as well as in the middle at an extremely quick pace, allowing players like me to see a lot of the ball.

“The team is very focused all school year long, much like any professional team would be. Their amount of determination on and off the field is reflected in how well they have been doing this season. The coaches are extremely experienced and know exactly how to coach a team to be one of the best, if not the best in the country.”

At the end of the day, Jacks didn’t really see much better out there when it came to possible Division I options for him.

“The soccer program is the best I've seen throughout my college searches,” he said. “They realize that as a student athlete you also have academic obligations, and are willing to provide you with as much support as needed. Playing professional soccer has always been a goal of mine, and Coastal has sent many players on to play professionally.”

D.C. United Academy defender Lars Eckenrode committed to Michigan for the class of 2013.

Goalkeeper Christian Lomeli of the Chicago Fire Academy committed to play for IUPUI for the class of 2013.

Diego Aguirre, from Weston FC (Florida), committed to Ohio State for the class of 2013.

Macsen Pritchard, from Tampa Bay United, committed to Duquesne for the class of 2013.

Defender Brandon Wilde, a center back for Inter FC Utah, committed to Central Arkansas for the class of 2013.

Darren Rios, from Weston FC, committed to Florida International for the class of 2013.

Defender Ryan Enriquez, from Weston FC, committed to Charlotte for the class of 2013.

Sean Young, from Tampa Bay United, committed to North Florida for the class of 2013.

Forward Luis Betancur, from Weston FC, committed to Florida International for the class of 2013.

Joseph Metzger, from Tampa Bay United, committed to Holy Cross for the class of 2013.