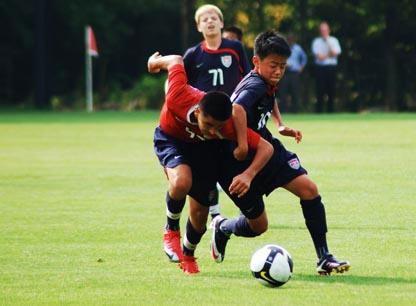 CONCORD, MASSACHUSETTS - The nearly 120 players who participated in the U.S. Soccer U14 Boys National Team ID Camp are traveling to their respective homes across the country Saturday, following Friday’s closing day of matches at the event. U14 BNT head coach Manny Schellscheidt sat down with Top Drawer Soccer to discuss the camp, player development in the U.S. in general.

He said he was pleased with the way this week’s camp progressed. 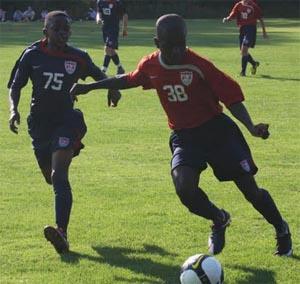 The U14 BNT National ID camp concluded on Saturday.
“Time will tell how many guys become great players, but once again a great group of guys who are exciting to work with,” he said. “Nothing beats hanging around with the little kids who are pretty gifted. Now we will sort it out. I’ll have time to take my notes and make my selection (for Thanksgiving camp). There will be a few moments when I have a little bit of a headache because it’s still a group of 50 or more that set themselves apart from the others, but as I just told them, it’s too early for anyone to feel put aside. There is a chance that the 80th or 909th kid could push ahead in the next few years.”

Schellscheidt said he wants to see more emphasis at the grassroots level on creative, attacking soccer.

“The only area where we are always searching and hoping is the attacking end. It’s the gifted part that you can’t create so much as a coach,” he said. “You’re always limited there, but what concerns me is I see so many clubs in youth soccer playing with not enough forwards. We are taking our cues from the big clubs playing with one forward. I’m waiting for the day when we play with no forwards. (Encouraging attacking play at the youth level) would also mean there are a greater number of players playing in this position and getting the kind of development and education they need to play it well and produce good players there.

“If it doesn’t start happening naturally we need to tweak it a little bit,” he continued. “That’s why at this camp we have everyone play 3-4-3. It’s not that I’m so crazy about that system, in fact I don’t even like systems that much for this age, but it means the greatest exposure to attacking soccer and we also can learn if we have good defenders because if we always fix it by having numbers behind the ball, then we don’t learn if we have good defenders either.”

This age group will convene as a national team playing against four regional teams at Thanksgiving at Walt Disney World in Florida.

Santa Barbara SC’s John Requejo scored a 2nd half equalizer from a scramble, to cancel out Austin Stamey’s half opener.

Highland SC forward Stamey scored after getting a good pass from Reginald Epps, who had another good match with his running down the wing. PDA midfielder Brandon Tetro looked good again in the middle of the park, both in winning the ball and in distribution. Surf SC’s Corey Baird was very composed on the ball in the middle of the field and showed good passing skills and overall technique. Mustang SC goalkeeper Andrew Ferber was decisive in coming off his line and showed good technique for shot-stopping, handling and distribution.

Even before his game-tying goal, Requejo was causing Team 5 trouble with his running and footwork down the wing in the 2nd half. New Hyde Park, New York’s Billy Stevens was solid in defense, while Lee-Mount Vernon SC’s Chase Gasper put in a hard-working shift in midfield, as he has done all week. Minnesota Thunder midfielder Toby Khounviseth again showed good feet, vision and passing ability.

Lineups (most players play one, 30-minute half)

WAZA FC’s Samuel Akpik scored the opener on a nice feed from Blackwatch Premier’s Daniel Apajee. Lee-Mount Vernon’s Imad Mojaddidi tied the score in the 2nd half on a setup from New Hampshire Classics’ Guyllain Khabala.

Vardar goalkeeper Craig Duggan made a great 1v1 save in the 1st half. Rico Lizbinski of Olney SC in Maryland shows great technique in striking and passing a ball, plus good vision. He never made the pool but I still feel POB Pirahnas goalkeeper Oliver Roberts was among the best goalkeepers here.

Washington Premier’s Denis Kalamar set up both goals for Team IV. He made a strong run with the ball before feeding New England Eagles forward Trevor Davock for the opener, then set up Ohio Premier’s Nathan Kohl to make it 2-0.  GSA Phoenix forward DeAndre Robinson pulled one back for Team III with a strong run through the middle, but no goals were scored in the 2nd half.