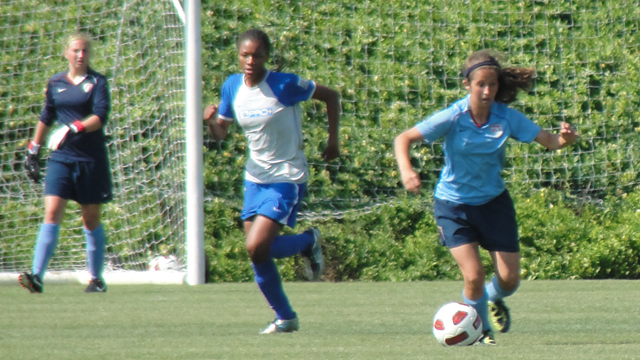 On Sunday, the first camp of 2012 for the U14 Girls’ National Team wrapped up at the Home Depot Center. It was the first of three camps this year for this age group, as the coaching staff attempts to find the core group of players. 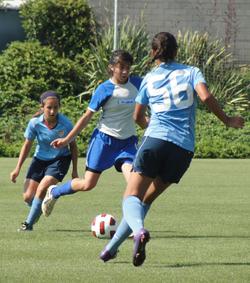 The change from one large identification camp in summer to three spread out over the year was a welcome relief to U14 GNT head coach Jill Ellis and assistant coach Damon Nahas, who were able to work with and assess a more manageable number of 48 players during the recent seven-day camp.

Some players seized the chance to catch the stern eyes of Ellis and Nahas. Others fell short of the mark.

From the perspective of the staff, this is exactly what they wanted.

“Ultimately, the point of this was to identify the players who are a little bit above some of the others,” Nahas told TopDrawerSoccer.com. “So, for us, there were a lot of good things we saw.”

There were some obvious standouts from the scrimmage on Saturday, specifically the play of the two strikers Madison Schultz and Sunny Dunphy who were unstoppable in front of the net.

Others did well too throughout the week, but Nahas put a less celebratory theme on the camp and implored the players to keep pushing themselves regardless of how the camp went for them.

“For all these kids, I hope they are motivated to take their game to another level,” Nahas said. “[This group] is constantly evolving. They can’t feel content. They have to realize what jersey they are wearing and hopefully they will do the work when they leave here.”

Nahas and the rest of the coaching staff conducted exit interviews on Sunday with the group before they departed back to their respective clubs.

“We meet with every player before they leave here,” he said on Saturday. “We discuss how they did this week, things they need to improve on, and recommendations on setting a plan with their club coach.”

Realistically, this is just where the work starts for many of the players who will remain as part of the core for this age group. The initial recognition for the first camp is an honor, but to stay with the plan it is going to some perseverance.

“We give them some direction with that, but ultimately is up to them – the drive internally and what they do on their own and alongside with their club teammates. We feel confident they will leave here with a plan, it is who commits to it that will make the difference.”

The coach revealed that the next camp will be in August, and the staff for this age group will continue to monitor players for possible inclusion for that camp over the summer.

The current crop of U15 players are eligible for the next U17 Women’s World Cup cycle in 2014.

“Obviously, it is a quick turnaround for that age group,” he said. “And we are looking at players from this team [the U14s] who could stretch into that group in the future.”

Given that youth World Cups are held every two years, this current group of U14s would be an off year for the U17 cycle in two years, but a couple of players have already impressed the coaches enough to already be in consideration for that group while playing a year up.

Mallory Pugh of Colorado and Mia Gyau of Maryland, two players from the U14 team, have been called into the U15 camp for this week.