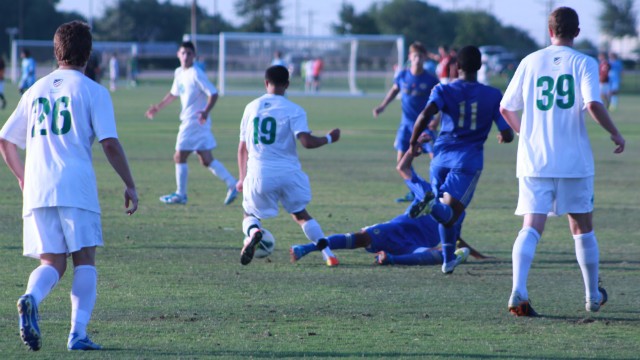 FRISCO, Texas — The stakes were even higher on day three of the Development Academy playoffs, as U16 teams took to the field for the second time this week in North Texas.

With temperatures once again dancing around the 100 degree mark, it made for tough conditions, but a handful of teams rose to the moment and delivered the performances needed to take themselves once step closer to a Finals Week berth. 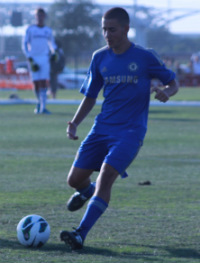 Here's a look at some of the action from Tuesday:

With a stern defensive effort and a free-flowing attacking display, Wolves chalked up another win to take their second victory from their first two games. That clears them atop Group 4 with six points, leaving them needing just a draw against the Sounders on Friday to advance to Finals Week next month.

Wednesday's game was tight from the start, but Wolves were bolstered by a solid spine headlined by Notre Dame-committed midfielder Blake Townes and Michigan State-bound center back Jimmy Fiscus. They finally got the breakthrough when Townes found a pocket of space, dangled a ball in front of the keeper and then poked it past for a 1-0 edge just before half.

"I know we didn't really ever settle in as a coaching staff, because I knew we had great respect for our opponent," Wolves coach Lars Richters said. "It certainly felt better, and I did feel as if we had chances to score, and that's encouraging."

Another one fell to Wolves in short order. Fifteen minutes after half, Wolves tacked on a second off a deflection, but that stoked Real So Cal into action. Nile Chau smashed in a curling golazo from the right wing about 35 yards from goal to chop Wolves' lead in half as time dwindled on the second half.

Wolves, though, were up to the challenge. Michigan State pledge Ken Krolicki stopped a back pass from Ahinga Selemani just outside the penalty area and one-touched a beautiful shot into the top left corner. That gave Wolves a two-goal cushion they didn't relinquish.

An early set piece goal by Rapids defender Enda O'Neill provided the ideal start, and the Colorado club added a second through Jovanni Chavez in the second half to win its second game in two days, a 2-0 defeat of the Bays.

“We knew that was going to be a very tough test,” Rapids Technical Director Brian Crookham said after the game. “It’s a group that has one of the leading scorers if not the leading scorer in the country and so being solid defensively, certainly not giving up opportunities was an important element of the game plan today and I think we were able to accomplish that.”

Abdalla Bangura was the aforementioned danger man for the Bays, entering the Academy Playoffs with 20 goals on the regular season. He certainly had his moment as Baltimore probed and threatened early on, but O'Neill scored an opportunistic goal, volleying home after a corner kick was headed back across the goal.

But that was never going to be enough, as Bangura led the charge alongside midfielder Nate Hall, and the Bays hit the crossbar a couple of times. The Rapids also looked dangerous through much of the first half, with Edward Venta-Yepes a menace on the flanks, and Dakota Peterson hitting the post with a free kick.

The tide turned thanks in part to a red card in the second half. With the Bays on the front foot, Matthew Bautista picked up a second yellow card, and the Rapids seized control of the game for the most part, with Chavez scoring in the 63rd minute to put the result more or less in doubt.

“I think after the man advantage we were able to stretch the game a little bit, keep it, make them chase,” Crookham said. “They were still dangerous, still a team that will come after you and I think we did a lot better.”

With CASL Chelsea’s 1-0 defeat of Revolution Empire in the other matchup in Group 2, Colorado can punch its ticket to Finals Week with a win or draw on Friday.

The Texans' brawn at the back won out over Chivas USA's high-flying attack in this pivotal Group 8 battle. The win shot Houston up to first in the group with six points, while Chivas USA is stuck in second on three points. The Texans simply need a draw in their final match Friday to advance back home for next month's Finals Week.

Despite the fact that Chivas USA won its regular-season division and scored a whopping 80 goals in doing so, Houston neutered its dangerous attack with a holistic display at the back. Still, the Goats hogged a greedy share of the possession all game, and Houston set up shop early to absorb the pressure.

The tactic paid off, as the Texans struck first on a counterattack that led to a cross that Bryce Marion bundled in from four yards. Just like that, the Texans held a 1-0 lead just before half.

"The Chivas team is an excellent team, a quality opponent," Texans coach Carl Fleming said. "We had a plan to come in and sit a little bit deeper and take our chances when we got them, and I think the kids did a terrific job of, when they got their opportunities to put their chances away."

Houston got its insurance goal about 10 minutes after the halftime restart on another counterattack. After Chivas USA wasted a long spell of possession deep in Houston's half, the Texans broke out. On the final end of a rapid-fire string of passes was Tulsa commit Zach Jackson, who wrong-footed the keeper and went far post to double the lead.

That was all Houston needed to go to the top of the group and take firm command of Group 8.

"When you look at the group and you've got a team like Chivas, you don't win that league in Southern California and not be a good team," Fleming said. "They had a lot of quality. We certainly can't get ahead of ourselves now. We didn't come in just to be Chivas, we came in to win the group."

The old adage goes that 2-0 is the most dangerous lead in soccer.

That overlooks the fact that a team is out in front to begin with, but that sentiment almost proved true for PDA. After jumping out to a 2-0 lead against a tenacious Crossfire Premier side, the New Jersey club did just enough to hold onto a 2-1 victory and the full points in Group 6.

“It was a big win,” PDA head coach Gerson Echeverry said after the game. “Our guys came in started playing pretty well early on, got a little sloppy at time but I think overall it was a good performance from our kids.”

While Crossfire certainly had its chance to open the scoring early on – including a goal waved off because of the offside flag – Tyler Pinho provided the opener for PDA, scrambling home a set piece early in the first half.

After a continued back-and-forth opening stanza, with chances on both ends, Jared Stroud found space on the right hand side of the box, received a beautiful entry pass, rounded Crossfire ‘keeper Avery Miller and extended the lead to 2-0.

A quick fire goal two minutes after the halftime break meant it wouldn’t be an easy finish as Satoshi Chaffin found the back of the net to cut the deficit in half.

Both sides would go on to create ample opportunities to score. Daniel Barbir was almost impossible for the Crossfire defense to stop coming down either flank for most of the game, and he helped engineer a handful of opportunities. However, when PDA failed to extend its lead, Crossfire nearly tied the game in the last five minutes, but Luke Postma headed his effort straight to goalkeeper Kevin Silva.

With the three points, PDA sits in first place in Group 5, as Texas Rush defeated Albertson SC 2-1 in the other match of the night.

An offensive explosion by the Sounders – six goals in the second half alone – led the Seattle side to a lopsided victory on the day against Orlando City. With the three points, the Sounders kept their hopes of advancing to Finals Week alive.

The Sounders held a modest lead of 1-0 at the half, before a raining down a cascade of six goals after the break, including four off the boot of Victor Mansaray in the 7-1 victory against the Florida club.

Two goals by forward Andrija Novakovich were the key to Chicago Magic’s win against D.C. United. The Marquette-bound striker couldn’t be stopped by D.C. on the day, as his brace paved the way for the comfortable victory, despite some good looks by the United attack.

MF Axel Mendez, Chivas USA: Despite the Goats' lackluster performance in a losing effort Wednesday, Mendez was a terror. The Mexican attacking midfielder danced his way through tackles, snapped off a bevy of impressive skill moves and generally looked like one of Chivas' few threats. A name to tuck away for the future.

MF Blake Townes, Columbus Crew Wolves: Townes did a bit of everything for Wolves on Wednesday, including scoring the opening goal in an eventual 3-1 win. He's headed to Notre Dame next year, and with such a deep tool kit, it's not hard to see why.

F Bryce Marion, Texans SC Houston: The speedy forward was a thorn in Chivas USA's side throughout their 2-0 win over the Southern California outfitWednesday. He scored the opener and was the tip of the spear for Houston's deadly counterattacking game plan, which worked largely because of Marion's quickness up top.

D Enda O'Neill, Colorado Rapids: The technically savvy defender may not have the size you'd want to see along the back line, but his ability on the ball and decision-making stood out throughout his performance. Add a game-winning goal just for good measure as well.

F Victor Mansaray, Seattle Sounders: It's difficult to overlook an effort like Mansaray had on Tuesday, as hie four tallies came in a lopsided victory, but all were important as the Sounders have a much better chance at a Finals Week spot thanks to the victory.