U16s get into the action at DA Showcase 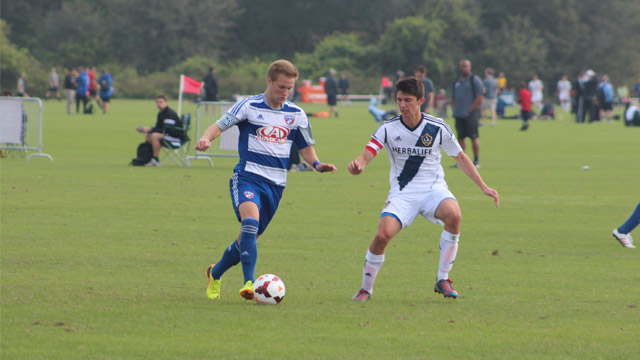 LAKEWOOD RANCH, Fla. — The second day of the Development Academy Showcase is in the books. After the U18 sides got their start on Wednesday, U16 teams joined the fun on Thursday.

The weather played tricks on the entrants, with lazy clouds and a chilly breeze keeping the temperatures down in the morning before a hot sun warmed up the sprawling turf in the afternoon. After the academy clubs cleared off, the select teams took center stage on the grandstand field. Two U16 teams with handpicked elite Development Academy players squared off before the U18 select sides took the field.

The select matches added the capper to a busy day. Here’s a look at some of the day’s happenings.

The select games were set up to bring together some of the best talent in the academy and give them an opportunity to showcase in front of a common crowd. There are challenges, of course, the biggest being the amount of coaching it takes to unite an unfamiliar group.

“Just to know their names (is a difficulty),” said Blue coach Juan Carlos Michia, who has deep history coaching in U.S. Soccer. “I told them, I said that I don’t have a good memory because I’m getting too old, so I’m going to call you by numbers. I didn’t want to give them too much information before the game because I didn’t want to confuse them. I asked them to give them the ball to your teammate, keep it simple and play as a team.”

The first select team matchup of the evening was arguably the most open, entertaining matchup of the entire day. Blue set up early to dominate possession, guided by the entertainingly complex midfield duo of Jaret Townsend (Real Colorado) and Wan Kuzain (St. Louis Scott Gallagher Metro). Kuzain largely stayed home to pull the strings, while Townsend used his prodigious dribbling ability to create space in the midfield.

But the day belonged to Blue right winger Orrin Gaines. The Lonestar SC wide man was easily the man of the match, and he put in a shift Thursday that belonged amongst the best stretches of anyone all week. He used his effortless speed to routinely torch his marker and was impossible to mark during his stretch in the game. He scored Blue’s first goal about 15 minutes into the match, and he set up the second by blitzing past Red’s left back before being tackled in the box to earn a penalty.

L.A. Galaxy forward Ethan Zubak calmly slotted home the penalty that Gaines had done so much to earn. While Red had its moments - Philadelphia Union forward Isaiah Young elicited a number of cheers from the crowd with his athletic moves on the left -

“I believe (Gaines) did very well,” Michia said. “He was flying. He wasn’t running. I told him that sometimes you can fly, sometimes you can play. So that way can’t become predictable. He made such a good impact from the beginning. And also we had a few more players who did well. We were knocking the ball, and also we were creating opportunities.”

While the U16 game was largely a high-flying end-to-end affair, the U18 match that followed was a bit more guarded. Neither team fully emerged from the feeling-out stage, and as a result the scoreless draw was more or less a deserved one.

On paper, Blue seemed to be set up to dominate the match. With a midfield that included Indiana Fire’s Cameron Lindley, one of the most talented young midfielders in the nation, and Houston Dynamo’s Christian Lucatero, an emergent star in the Development Academy, Blue seemed nearly invincible. While Lucatero enjoyed a bright game and Lindley was compact and efficient, the two were never able to get on the same page. And though he had a few bright moments, a sub-par night by Lindley’s standards made life more difficult.

Lucatero only played the first 45, but his performance was man-of-the-match territory. As he warmed to the pace of the game and his new teammates, he slowly began asserting command going forward. He had an ally in FC Dallas Academy product Coy Craft, whose last name bore an appropriate resemblance to his play. His quick feet and ability to play on both flanks made him a coveted flanker.

While the game never got a goal, Blue came closest. Second-half substitute Kendall Stork (Chicago Magic PSG) burned up the left sideline and was taken down in the box about five minutes after halftime to earn a penalty. But Amir Bashti (SJ Earthquakes) took the penalty and had his effort rejected by Real Salt Lake-AZ keeper Christian Herrera.

This game seemed set up to be a classic, with both sides continually stocked with top Development Academy players and often fielding attractive sides that vie for both U16 and U18 titles every year. But the Galaxy never seemed to find much traction and couldn’t find an avenue into the game, which did little to flatter either side.

Give FCD credit for that, of course. The Galaxy didn’t start standouts Axel Mendez or Adonis Amaya, though the latter came on at halftime as an impact striker. By then, though, FCD had already generated a 2-0 lead they’d built on the back on a stop-start game that never really took off on either side.

With Coy Craft slated to start in the select game later that night and Kellyn Acosta not playing, FCD leaned on the talents of midfielders Jose Salas and Patrick Khouri, a talented defensive midfielder who swept away a number of Galaxy attacks with understated calm. While FCD’s attack was good but inconsistent, Khouri and the back line he helped organize was unflinching.

Khouri is normally a center back, but he was moved to the midfield due to an injury to key holding midfielder Ethan Sonis, who coach Luchi Gonzalez said won’t be back to full fitness until January. In lieu of his absence, Khouri was bumped up to the midfield and performed beautifully.

“Patrick didn’t get a lot of time there tactically. It was kind of a last-second thing,” Gonzalez said. “But he’s played there in the past for us. He’s played there for past clubs, so we know he can come through there.”

Bolts thoroughly controlled play and got both its goals in the first half to cruise past Kickers to open its first of three games with a bang.

While Kickers did its best to push back the Irish tide, Bolts was unstoppable rolling forward. Attacking midfielder John Doran put down his marker on the game by dominating the midfield, and Bolts got its first goal less than 10 minutes in thanks largely to Doran’s influence. Alexander Dano latched onto a through ball and finished near post to go up 1-0. About 20 minutes later, Mason Brummett out-muscled a defender to a deep ball and scored on a one-on-one to double the lead before half.

Kickers were largely pinned back and made the best out of its fleeting attacks. Most of those were led by the quick Julian Ngoh in the midfield, who darted in and out of traffic attempting to get something going. But Bolts’ back line was too tall, and Doran and company had too much about them to be denied.