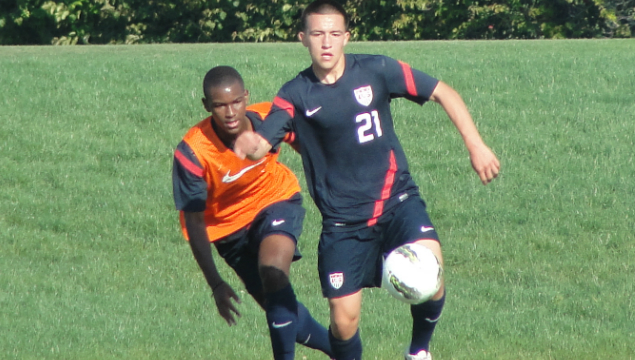 CARSON, Calif. – The U.S. U17 Men’s National Team opened up an important training camp on Monday at the Home Depot Center. 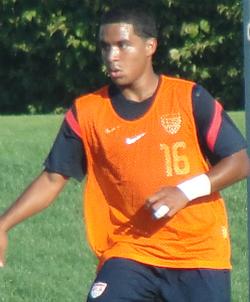 While qualifying for the 2013 U17 World Cup remains months away, head coach Richie Williams and his staff only have days before they make the call on which players will be called into the Residency Program for the fall semester.

“We will make the decisions pretty soon after the camp,” Williams told TopDrawerSoccer.com. “We will put our invitations out shortly after that. The semester starts right at the end of the August – between the 20th and the 25th.”

There are a number of new faces at this camp that have not received a look with this group (or any youth national team) in the past.

“We have brought in 40 players,” the coach said. “We have some current players who are in Residency and we also have players who have been scouted over the year. So we are trying to have a good training camp for everybody, but it is also a way for us to identify some more players for Residency for this upcoming semester.”

Williams was pleased with the opening day but already saw some room for improvement.

“Everyone has come in with a good attitude, and good energy,” Williams said. “But you already see some of the guys are tired. Some of them are not used to the two-a-day sessions. And maybe some guys have not been playing as much, but we have to get them going.”

In the second training session on Monday, the group did some light fitness and possession work before breaking into four teams of nine (one team had a substitute) for short sided games over the last hour or so of practice.

The goals were scarce as players adjusted to new faces, but there were some standout moments from the play.

The battle between Ahinga Selemani, who was fresh off an appearance at Finals Week only days ago, and Tyler Turner was one of the noteworthy matchups on the day. Both players used their physical size and strength well against equal opposition. Selemani created a few chances in the other games, including scoring a goal off a defensive mistake, but Turner did well to slow him when they clashed in the first game.

Corey Baird was solid playing off of Selemani and showed a gritty work ethic to hound defenders throughout the day. Baird has been one of the starters with Selemani recently, so it was no surprise for the two to link up well from the start.

FC Dallas’ Jordan Cano was strong on the tackle and equally as adept with the distribution. Cano paired with Tommy Redding for what proved to a formidable defense from the blue team.

Goalkeeper Jefferson Caldwell made a handful of acrobatic saves on shots from distance. The 6’1 keeper had a strong outing and showed he could be in contention for the hotly contested spot in net for the U17 MNT.

Rolando Munoz spent most of the 2011-12 Development Academy season playing outside back for the L.A. Galaxy U16 side. The U17 MNT coaching staff moved Munoz into the center of the field, and the teenager is excelling in the new role. His composure and quick feet made him one of the few midfielders who looked at ease working away from pressure. Munoz also did a great job distributing the ball around the field.

The attacking trio of Omar Castro, Rubio Rubin, and Dalton Pando took some time to get into gear. After the first game, Castro adjusted to more of a support role, which freed the space for Pando and Rubin, who both scored a goal over the course of the three games. Pando displayed great composure in front of the net, which is uncharacteristic of most teenagers. Rubin’s goal came on a cleanup after a goalie spilled Castro’s shot from distance.

With a very talented midfield trio, there was some expectation on the Green Team to dominate action, but that never came to fruition. Flores had his moments when he would slice apart the back four, but they were not as common as, perhaps, the coaches would hope. Akale did well to drop back and distribute the ball from the back four into the attack, but could have been more involved in the final third.

Lone striker Brian Pacheco, who scored a hat trick a few days ago with his club team at Finals Week, was flagged for being offside more than any other player on the field. Pacheco’s game is to be on the shoulder of the last defender and some of the time it works, but the over-eager assistant referees kept him at bay on Monday. Still, the forward’s skill was obvious when he had the ball on his feet, so it is hard to ridicule his desire to impress the coaching staff. Pacheco did contribute an assist on the day when he passed the ball off to Flores who hit a quality strike from 18 yards out.

Outside back Shaquell Moore displayed tremendous recovery speed on multiple occasions during the games. He was also sound on the ball when his squad held possession, but the Georgia-native became too reliant on passing back to another defender or the keeper even under light pressure.

Abraham Romero’s ascension in the youth national team sphere over the last few months has been remarkable. The LA Galaxy U14 goalkeeper was training with the U14 Boys National Team in February. A couple of months later, Romero was surprisingly called into the U15 BNT where he excelled at a tournament in the Netherlands in May. A month later, he was the star for the U15s in a tournament in Mexico. Now, the 14-year-old is in with the U17 MNT, for the first time, and looks right at home.

FC Dallas’ Aaron Meyer was also very good for the yellow squad. The midfielder was dropped into a more defensive role, but it did not see to bother the Texan. Chivas USA’s Bradford Jamieson drew some praise from the coaching staff for his hard work in tracking back on a few occasions.

Alan Winn, the leading scorer in the Development Academy for the U16 age group, played left back on Monday. Winn reads the game well, so a switch to a defensive role is not that surprising, but it does hinder his thirst for finding the back of the net.

Cameron Lindley (Indiana United/ Carmel, Ind.) sat out Monday’s afternoon practice. Williams said it was nothing serious. “It is just a minor muscle issue. Hopefully, he will alright in a day or two.”

The coaches put a limit of three touches on the players during the games. It was rare for a player to get called on taking an extra touch or two. The coaches clearly wanted to see the ball moving sharply across the field, which did happen from time to time.

With eight field players on each team, the go-to formation was a 4-3-1. Some teams adjusted on the fly to a 4-2-2 to fit the personnel.