There’s no question that every player in Taylor Racioppi’s shoes is after a coveted spot on the U17 Women’s National Team.

Recently called into the first U17 camp of 2013, Racioppi is eligible for the current U17 Women’s World Cup cycle, with the next competition scheduled for 2014. 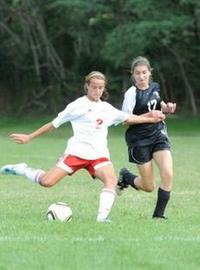 But while that may be her more immediate focus, Racioppi put to bed her collegiate future with a recent commitment to Duke.

“I decided to commit to Duke because it fit me so perfectly,” Racioppi told TopDrawerSoccer.com. “Everything from the campus to the dorms, the professors, the programs and of course the soccer team was perfect. The academics are stellar and the ACC is a very competitive conference to be in.”

While some elite players dread the search process for schools, citing its stress and difficulty of choosing their next playing destination, that wasn’t what Racioppi’s experience was like.

“I'd have to say that overall I really enjoyed the college recruiting process,” she said. “Over the summer and into the fall, I had the opportunity to visit some top women's soccer schools. I saw diverse campuses, met teams and spoke with really nice and inspirational college coaches.”

Racioppi was undoubtedly a prospect many colleges were chasing, and it was Duke’s head coach that ultimately tipped the scales in favor of the Blue Devils.

“Duke women's soccer has one of the best coaches in the country,” Racioppi said. “I believe having Robbie Church as a coach is a pivotal point in the soccer program. Not only does Robbie have an indescribable passion for what he does with the team on the field, but off the field he is equally as enthusiastic about his players. Robbie is not solely creating a great soccer team. He does more and goes beyond and creates great people and students.”

Midfielder Shiloh Price (TSC Hurricane) committed to Oklahoma for the class of 2013.

Defender Courtney Klosterman (Blast FC – Ohio) committed to Dayton for the class of 2013.

Midfielder Meggie Dougherty-Howard (Tampa Bay United) committed to Florida for the class of 2013.

Forward Sara Waters (FC Milwaukee) committed to Wisconsin for the class of 2013.

Midfielder Andrea Larsen (Cleveland FC) committed to Western Kentucky for the class of 2014.

Midfielder Sydney Aldrich (Connecticut FC) committed to Hartford for the class of 2013.

Midfielder Katie Leonard (Real Colorado) committed to Harvard for the class of 2013.

Defender Katherine Millet (Revolution Empire) committed to Binghamton for the class of 2014.