Albertin Montoya’s U17 Women’s National Team is about to depart for Guatemala where it begins play May 1 at the CONCACAF Championship, which is the qualifying tournament for the FIFA U17 Women’s World Cup taking place in August.

Like all teams, every player on the roster has a unique story. This week we’re chronicling each of those, as told to us by the players. Part 3 of 4. Read PART 1 HERE, PART 2 HERE. 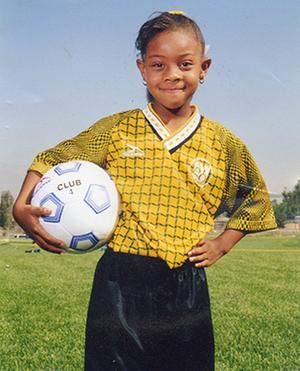 It is easy to spot Amber Munerlyn on the field. She is the one torching the grass as she turns on the afterburners.

Munerlyn, on top of being a youth international in soccer, is also a speedster on the track.

Munerlyn clocked 24.83 in the 200-meter dash during her sophomore season to rank among the top in the state for her graduating class.

U17 WNT coach Albertin Montoya has utilized that speed off the bench in the warm-up camp earlier this month, with Munerlyn being one of the first substitutes in the second half.

“She patterns her game after Kobe Bryant,” Marian Munerlyn said. “Amber is amazed with his will to win despite unwelcome circumstances. To this measure, she’s engrafting this mindset into her soccer game.”

Lauren Kaskie does not have superstitions or rituals. She just goes out on the field and gets the job done.

The midfielder from Las Vegas is an authoritative figure in the center of the field for the U.S. U17 Women’s National Team. She also has a cannon for a foot, which makes her shot from distance always dangerous.

She recently returned to the fold after sitting out for a short stretch, and added an extra luxury to the U17 WNT roster.

“Lauren Kaskie has come back from an injury and we are giving her minutes,” Montoya said following the camp in Chula Vista. “We are very deep in the midfield.”

Montoya went on to say that the midfielders continue to support each other, even though they are competing for only three spots on the field.

The UCLA-bound midfielder said that she has really enjoyed the time she has spent with this group of girls, especially on car rides.

“The car rides to trainings/games is where we always blast music and have a good time whether it is belting the lyrics or dancing hysterically,” Kaskie said. “We all come together and make every car ride enjoyable.”

Morgan Stanton has been honing her craft for a long time.

The 17-year-old has been playing with her club, Colorado Rush, since she was four years old.

Since then, it has been pretty much all soccer except for a brief dip into softball.

“I thought it was boring,” Stanton said about her one season playing softball. “When I was on the softball field, I couldn’t wait to get back on the soccer field where there was some action going on. Soccer is all I really wanted to do.”

And now, soccer is all she is doing, as the hard-working midfielder heads to Guatemala this week with the U17 WNT for the CONCACAF Championship, which she said is a dream come true.

“I am honored to play alongside of my teammates in our quest of making it to the FIFA World Cup,” Stanton said. “To have this opportunity means so much. It is an incredible feeling to know your hard work is paying off. I am thankful to my coaches who believe in me and I will do my best to have a positive impact on the field. I hope to make my family, my club, my teammates, coaches and country proud.”

The soccer-aholic dons the number 6 jersey for both club and country, which she says is due to her admiration for former U.S. Women’s National Team star and current Santa Clara assistant coach Branid Chastian. Stanton recently gave her verbal commit to play for the Broncos in 2013.

“I am excited to be able to learn from someone whose inspiration runs deep.”

The group heading down to Guatemala is a tight-knit team of 20.

But what happens to those who have to sit on the bench?

Boyles, one of those hoping to contribute down in Central America, thinks that the competition for playing time makes the team better.

“We are dear friends off the field, but on the field, we all compete for positions and playing time,” she told TopDrawerSoccer.com. “The players on this roster are all incredible people and players and at any given time we are aware that anyone of us can be on the field or on the bench.

“The atmosphere is extremely competitive and it requires each of us to refine the parts of the game that are our weaknesses.”

That competitiveness is certain to pay off handy as 11 players battle for playing time at the tournament. Boyles, a midfield standout for CASL Chelsea Ladies, is hoping to force her way into head coach Albertin Montoya’s lineup.

And when she does get that chance, it’s something she’ll take extremely seriously.

“The opportunity to represent my country is one that I don’t take lightly, instead, it will be done with the greatest love and respect that I have in my heart,” she explained.

With the tournament around the corner, Payne realizes just how unique this upcoming chance is for her and her teammates – and is already dreaming big.

“It's a once in a lifetime opportunity to be able to play in [the] U17 CONCACAF qualifiers and I am very grateful to be given the chance,” she told TopDrawerSoccer.com. “Watching the full women's team play in the final against Japan gives me inspiration to want to work hard and achieve the goal of hopefully playing in a World Cup final myself.”

To get to this point, Payne has put in the effort and hours recruited to improve her touch and technique upfront. She said that for a while growing up, she played on boys teams which helped her improve and become a stronger player.

Another versatile player Montoya has at his disposal, she’s also very comfortable as an attacking midfielder, and has the pace to stretch a back line.

Making a trip abroad is one of many things she’s eager for when thinking about the challenge.

“What I am most looking forward to about playing in this tournament is to qualify for the World Cup and competing against the best teams in our region,” she said. “I am also happy to be able to travel to a different country, as that is always a good experience and I feel that I will learn a lot.”