U20 forward working hard to reach the Top 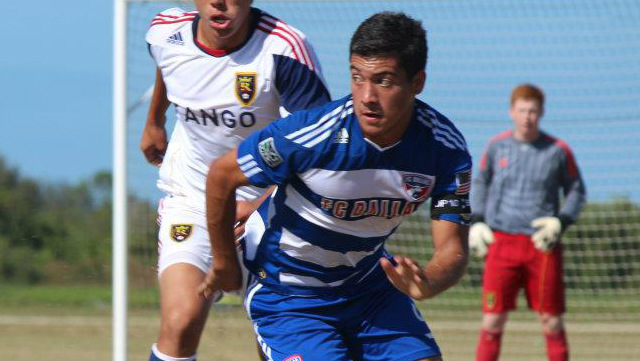 In early 2011, current FC Dallas and hopeful U.S. U20 MNT forward Jonathan Top elected to sign a pro deal instead of attending Maryland(m) that fall.

The decision obviously altered the trajectory of Top’s playing career, and the last year and a half has been full of ups and downs for the 19-year-old native of Fort Worth, Texas. He’s bounced between the Academy level, reserve and first team in Frisco during that time, and has continued to evolve as a player.

Despite the slow start, 2012 has been kind to him thus far.

“I think it’s been a really good year so far,” he told TopDrawerSoccer.com. “It’s only halfway through the year and I think I’ve done a pretty decent job with the first team, and I was able to be rewarded by that by Schellas and to be able to play in some games.”

Top is referring to the two appearances he’s made with the first team, both at the early part of the season, as FC Dallas navigated through a brutal stretch of injuries and Top came off the bench in those two league matches. 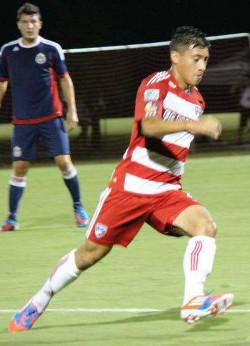 Prior to that, his time on the field in an FC Dallas shirt was limited to reserve matches and Academy games, as he remained eligible for the U18 team who he played for 14 times over the 2011-12 season.

Over the year and a half, his work ethic and progression caught the eye of FCD head coach Schellas Hyndman.

“The thing that we were really pleased with Jonathan is that he really took this serious[ly],” Hyndman told TopDrawerSoccer.com. “He came in and I’m thinking he was about 17 percent body fat when we came in, huge thighs, strong, but you could tell he was carrying more weight than he needed to carry. He got down to about seven percent body fat, and just that alone shows what this transition has done for him.”

Cutting that weight and improving his game has also earned him recognition with the U.S. U20 Men’s National Team. Top has been in a handful of camps with the U.S setup under Tab Ramos this year and has hopes of earning a spot for 2013 World Cup qualifying.

The experience traveling abroad with the U20s – a recent tour of South America for games against Uruguay and Chile** – helped to shape Top’s perspective about his Home Grown status and how his story is a growing and vital trend here in the U.S

“It’s been something unique,” he said about his year and a half. “I think what MLS is doing with the Home Growns is something that we really needed, because whenever we go on national team trips, especially in South America, we see how far behind we are, even whenever we have professional players going down on those trips playing against professional players from South America with their countries.”

But Top’s experience as a pro also highlights a growing concern in the game here in the United States – a player between the ages of 18-22 is signed to a pro deal, yet struggles to get games.

Because Top is still age eligible for the Academy, he’s played in U18 games, in reserve games here and there as well as his two appearances for the first team. The concern is, if that’s enough games at the right level for a player like Top to progress to and fulfill his potential.

His first coach recognizes the need for the league to continue and help players like Top.

Regardless of that hiccup, Top keeps his head down and is working very hard to achieve some of his goals over the next year. He’s hoping to, first and foremost retain his spot on the team in 2013, lock down a chance at representing the U.S. at U20 World Cup qualifying, and continue to get better day-by-day.

This week is set to be a busy one as Top is in Houston to compete with the FC Dallas U18 Academy side at Finals Week. Top opted to stick with his club team instead of join the U20 MNT trip to Northern Ireland for the Milk Cup. On Wednesday night, it paid off big time, as Top scored the winning goal to keep FC Dallas' hopes of a spot in Sunday's national championship.

For Top, it's just another step in his long journey towards to the pro grame, and this week is a chance to complete his Academy career (he won't be age eligible next year) on a high.