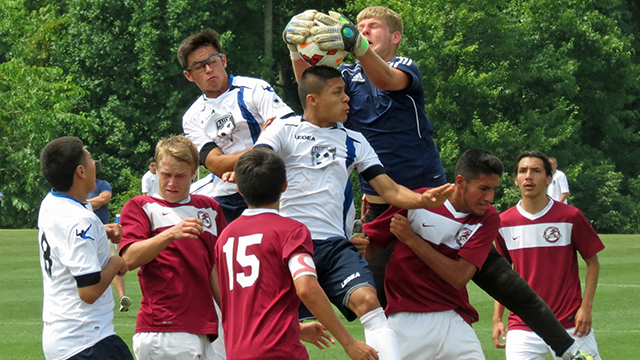 “Every game we played, we wanted to win,” Hearns said. “That way, we don't have to sit there and question what other teams are doing, or start thinking 'maybe we'll get in, maybe we won't.'

“That's been our outlook for this whole tournament – step up and win every game, so we don't have to wait on somebody else to do something.”

So far, that approach seems to be working for the Iridium, who moved a step closer to advancing to the U16 Girls Super Group finals by shutting out Farmingdale SC Legacy 3-0 in round-robin play Saturday at the Bryan Park Soccer Complex.

Madison Hairston put THUSC (2-0-0, six points) ahead with her goal in the opening minutes of the first half, and Anyssa Devera and Alexandra Sanders added insurance goals in the second half for the Iridium.

That leaves THUSC as one of two undefeated teams in the U16 Girls Super Group along with West Coast Soccer Wild (2-0-0, six points) heading into Sunday's final round-robin matches.

The Iridium will face CentCal Cosmos 2016 (0-2-0), while the Wild play Crew Juniors Gold (0-1-1, one point). Only Riverhounds Development Academy (1-0-1, four points) still has a chance to earn one of the two finals berths, but would need to beat Farmingdale Legacy (0-2-0) in its final round-robin match on Sunday, then hope that either the Iridium or the Wild lose or tie in their matches.

After a scoreless first half, Raiders SC Premier scored twice in a nine-minute span late in the second half to record its first round-robin win and remain in contention for a semifinal berth.

Jaime Zaragoza Jr. and Jose Pineda scored in the 73rd and 82nd minutes, respectively, and goalkeeper Eric Estrada got the shutout for Premier (1-0-1, four points), which needs to beat or tie Upper Freehold/Allentown NJ Strikers (2-0-0, six points) in its round-robin finale to earn the semifinal berth.

In Sunday's other round-robin matches, the Lightning play Inter, the Tornados Red face the West Florida Flames (0-1-1, one point), and the United take on Dynamo Red 97 (0-2-0).

Rangers Gold scored twice in the second half, then held off a determined Black Magic rally to remain undefeated and clinching a berth in the Super Group finals.

Alexa Smiley scored in the 53rd minute to put Whatcom FC (2-0-0, six points) ahead, and Mia Hodges put in an insurance score at the 68th minute as the Rangers Gold remain tied with the New York Rush Patriots 97 (2-0-0, six points) for the group lead.

Julia Kirkpatrick scored for Black Magic in the 72nd minute, cutting Rangers Gold's lead to a point in the closing minutes. They had a chance to tie the match, but keeper Natalie Robinson deflected Kate Peterson's long shot off the crossbar, then pounced on the loose ball.

Rangers Gold and the Patriots will face off in the final round-robin match Sunday, but both teams have locked up spots in Monday's championship match.

The Thunder moved a step closer to advancing to the U15 Boys Super Group finals despite battling to a tie with Aguila at Macpherson Stadium in the second day of round-robin play.

The Thunder would need to win their final round-robin match against Marlboro SA Warriors Blue (0-1-1, one point), while hoping that the Falcons tie or lose their match against Marin FC Blue 99 (0-2-0).

Should the two teams finish tied in the standings, they would play a semifinal match on Monday morning, with the championship match moved to later Monday.