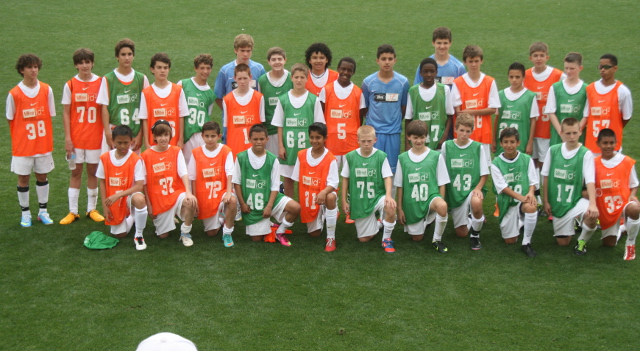 Charleston, SC – The final day of the US Club Soccer id2 Program Training Camp included training on the girls’ side and two morning scrimmages for the boys. Unlike the girls scrimmages on Saturday, the boys’ were a bit more informal, with teams being announced just before warm-up, so they will be designated “Orange” and “Green” based on the color of their pinnies. 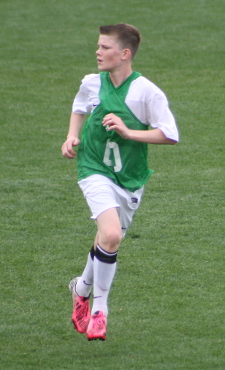 The green team was busy early, with Parsippany SC midfielder Jack Worth nearly scoring on a header and Match Fit Academy’s Cody LeCava hitting a shot just wide right in the opening minutes.  However, it was the orange team who got on the score sheet first, when Chicago Magic midfielder Anthony Saporito slotted a ball just inside the right corner from 15 yards out to give Orange the 1-0 lead midway through the first half.

The most exciting moment of the first half came on a goal mouth scramble by the orange team in which a shot hit both posts, the crossbar, the goal line, then bounced out. Orange was extremely unlucky not to have gone up 2-0, but it didn’t take long for them to regroup and for United Futbal left back Trey Hines to hit a cross to FC Delco forward Jack Dugan, who doubled the lead for Orange.

The Green team pulled one back just before half when Orlando City midfielder Austin Amer hit the inside of  the far post from the left side of midfield.

The second half was back and forth, with the Orange center back duo of Pierce Ugarte and Clay Smith doing a good job of thwarting Green’s attack from midfield, and the Green team goalkeeper coming up huge on more than a couple of occasions. At the end of the match, Green was able to tie the game on a 12 yard strike from Northwest United forward Christopher Rocha-Mendez.

Tall center back Ugarte did well on the day, as did South Carolina United midfielder James Shealy in the second half.

The final scrimmage of camp featured quite a few good performances, and once the lid came off, there were goals in abundance in the second half. A few of the players from Scrimmage 1 were held over to play in Scrimmage 2.

The only goal of the first half came when FC Golden State’s Issa Badawiya was the lucky recipient of a defensive miscue by Orange and was able to hit it home from 8 yards out. Other than the goal, the teams were even in the first half, with particularly composed midfield play from D.C. United’s Chris Durkin (Green) and some great runs by Triangle United forward Sheldon China (Orange) who played on the right wing.

The second half proved to be entertaining with play from end to end resulting in a number of goals. The first came minutes into the half when lanky center forward Nicolas Garcia-Morillo found Westside Timbers’ Adrian Villegas who calmly finished from the edge of the 6 yard box to put Green up 2-0.

Orange got on the scoresheet thanks to Match Fit Academy midfielder Gray Ricca. Ricca made a perfect run up the midfield after receiving a pass from the back and hit the back of the net from 18 yards out to make it 2-1. Green’s Garcia-Morillo didn’t take long to put the lead back to two when he beat the Orange goalkeeper, took the ball to the end line, and cut back to second half substitute Jacob Garzon who was literally screaming for the ball, and rightly so. He was in the perfect spot to finish in the left corner.  One last goal by South Carolina United midfielder Liam Hurdock who was in the right place at the right time made the final scoreline 3-2 in favor of Green.

Players who stood out for Orange included right back Grayson Barber (South Carolina United) who made some good runs up the sideline, and PA Classics midfielder Seth Kuhn.

A number of players were exceptionally strong for Green. In addition to continued stellar play from Friday’s standouts Garcia-Morillo, Haskell, and Pleasants, right back Sammy Tojaga, center back Justin McStay, and holding mid Chris Durkin performed well on the day. Cleveland International’s Tojaga did a good job coming forward and sending in crosses, while NJSA 04’s McStay and D.C. United’s Durkin were both solid in their respective roles.