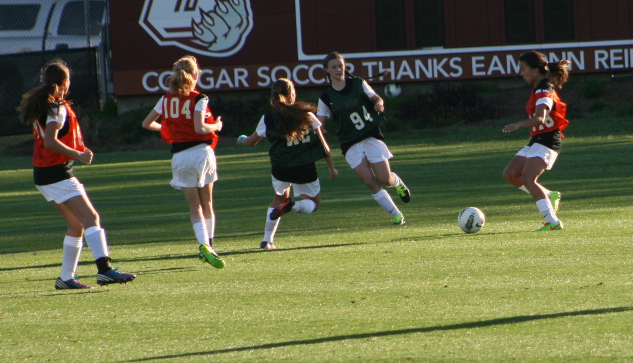 CHARLESTON, S.C. – Day two of the US Club Soccer id2 Program Training Camp brought fabulous weather along with some good soccer. Sunshine, low humidity, and temps in the 70s were a perfect setting to watch youngsters get the chance to impress the id2 coaching staff as well as a US Youth National team scout who was in attendance for the scrimmages. 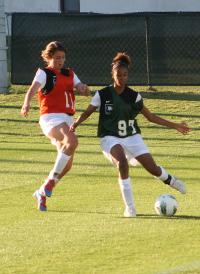 Players competed on their newly formed teams, and the scrimmages at College of Charleston stadium were much more evenly matched than on Day 1. The first scrimmage put new Team Seven against new Team Eight, and the second, new Team Five vs. new Team Six.

PDA forward Zoe Steck  did not start the scrimmage, but definitely provided a spark for Team 7 when she came on  the field. Within minutes she hit a beautiful cross to a teammate for a shot at point blank range, which the Team Eight keeper did well to save. Steck then scored the game’s first goal when a ball landed at her feet and she finished past the keeper from 15 yards to put Team 7 up 1-0 at the halftime whistle.

I’m still not sure whether the second goal of the game was meant to be a cross or a shot. For the answer to that question, you’ll have to ask Tualatin Hills United SC’s right back Monet Kunz, who dribbled up the sideline, heard a teammate call “Cross!”, and hit the ball almost from the touchline over the outstretched arms of the tall FC Pride goalkeeper Kayley Jones into the far post side netting to put Team 7 up 2-0. Jones had some good saves on the day in both games, but there was nothing she could do about that one.

Players that performed well for Team Eight included Dallas Sting midfielder Neaka Khalilian and CASL center back Brianna Morris. Khalilian was active in the midfield until suffering a knee injury towards the end of the first half, and Morris was vocal, directing her team from the back line.

For Team 7, in addition to Steck, NJ Crush FC’s Jillian Jennings and Timbers/Crossfire forward Makayla Woods did well. Jennings sent in multiple dangerous crosses from the right wing, and Woods was vocal and has a good touch. 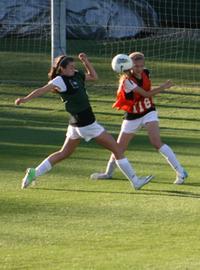 The scrimmage between these two teams clearly pitted the best against the best on the day, and there were notable good performances on the field.  The two teams were evenly matched and provided some entertaining fast-paced play, as well as some good battles in the midfield.

The only goal of the day came from FC Dallas defensive midfielder Raleigh Loughman who corralled the ball at midfield, took a few dribbles, saw an opening and hit a great shot into the upper right corner from about 25 yards dead center.

Flank play was the highlight of the day, however, and Team 5 left back Mary Johnston was the player of the match. Although listed as a forward on the id2 roster, and she has 8 goals and 5 assists for Crossfire’s U14 ECNL team as a forward, she was extremely active in the right back position, making multiple well-timed tackles and playing to feet. She also did a good job getting forward.

The state of Washington is producing some good forward/outside backs, as Spokane Shadow forward Kelsey Turnbow was another that performed well as an outside (left) back. TopDrawerSoccer.com highlighted her performance as a forward yesterday.  Team 6’s Turnbow had some good battles with Freestate SA and Team 5 forward Kori Locksley, who was speedy, performed well, and was unlucky not to get on the scoresheet.