FC Los Angeles is a relatively small club in the South California soccer scene. With just over 300 players on the club’s 20 teams, FCLA has avoided the allure of rapid expansion and alliances.

The reward has been utilizing the resources of the coaching staff and developing players capable of playing at a much higher level. 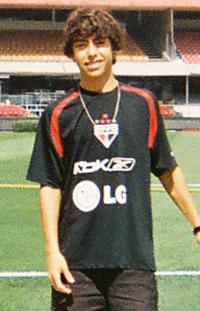 One of the most recent examples of FCLA’s success is Ethan Lotenero who is currently a member of the Pachuca Academy in Mexico.

Now, FCLA has another alum, Giovane Lobo, heading abroad to help with his development.

Lobo, a 14-year-old midfielder, has accepted an offer to join Sao Paulo’s Academy.

“Giovane [Lobo] went on a ten-day trial over there last August,” FCLA Vice President Mark Shanley told TopDrawerSoccer.com. “Within ten days [of returning], they had an offer in writing. His parents were in shock.”

“He is so graceful on the ball,” Shanley said. “He has great vision. Technically, this kid is fabulous. He went down there, and Sao Paolo must have seen the same thing.”

FCLA coach Beto Dos Santos, the uncle of Giovani and Jonathan Dos Santos, has connections with a number of clubs in Brazil. LAFC has taken teams down in the past to compete in tournaments. Lobo was one of the players that FCLA recommended when Sao Paulo called the club asking for any players worthy of getting a look at the historic club.

Lobo flew down to Brazil last week to start his yearlong contract with the club. The club and Lobo’s parents agreed to that start date, so he could join at the start of the new school year.

The youngster has dual citizenship (Brazil and U.S.). Shanley said that Lobo has been in U.S. marketing training centers, but yet to receive a call-up to the youth national team.

Damien Paulette is a member of one of the most respected clubs in Argentina, San Lorenzo. The 17-year-old’s path to get there is something of a storybook tale.

“I first got to San Lorenzo when I moved here with my family,” Paulette told TopDrawerSoccer.com. “Both my grandfather and my father are fanatics of this club just like me.

“I started playing indoor in the club, and that’s when the scouts and coaches of the 11v11 side saw me. They asked if I wanted to play.”

Paulette, a left back by trade, was born in Los Angeles in 1995. His family moved to Argentina when he 10 years old.

“I have what they call a pre-contract,” Paulette explained about his status with the club. “I give my word that I won’t go to another club until I’m 18.”

The teenager also said that he has practiced with the top team a couple of times this season, but has not appeared in an official game yet.

As for interest from U.S. Soccer, Paulette said that he has not heard from the Federation.

“U.S. Soccer has not been in touch yet, but I’m not thinking of giving up. I would love to play for the U.S. youth teams and win a title with them if possible. It will be a dream come true.”

After four years in the United States, former Duke goalkeeper James Belshaw is heading home to try his luck at launching his pro career in his native England.

This decision came on the tail end of a successful preseason experience with the Chicago Fire, Belshaw told TopDrawerSoccer.com last week. The MLS club extended a contract offer to the shot-stopper, but he declined the offer, instead electing to head back to England where he’ll head back on trial with clubs back home.

Belshaw had nothing but good things to say about his experience with the Fire, but after discussions with his family, his agent – Kevin Weinress of First Wave Sports Group – he decided to head back home and try his luck at home after playing the last four seasons for the Blue Devils.

Earlier in the year, Belshaw was on trial with Notts County, Coventry City and Everton, although he didn’t disclose where he’s heading now.

Joseph Anthone contributed to this story.