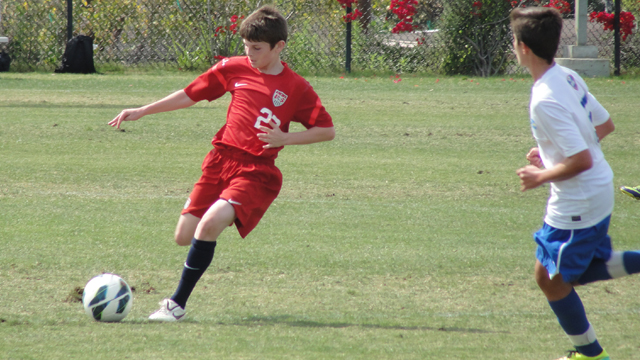 The identification process for the 2017 U17 World Cup squad has already started. With the completion of the third camp for the U.S. U14 Boys National Team on Saturday, the groundwork is starting to be put in place for a squad that’s three years off from the global stage.

The camp at the National Training Center in Carson, Calif. marked another step in the process to identify players and implement a style of play in line with the other age groups in the U.S. Soccer umbrella.

“One of the primary objectives each time we get together is to evaluate the players,” U.S. U14 BNT head coach Tony Lepore told TopDrawerSoccer.com after his team played to a 1-1 draw against Cal South ODP ’99 on Saturday. “Both of these games were really good environments for evaluating the players – playing older guys is still the best way to challenge them. I thought we were able to apply all the concepts that we have been working on even against older players that have the physical advantage. We had to use technique and smarts and movement off the ball and playing quick because we can’t get in these physical duels.”