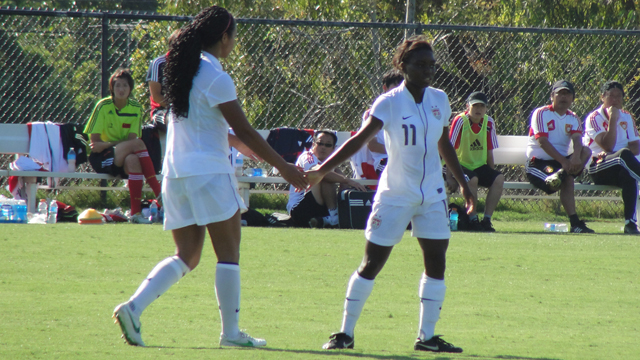 CARSON, Calif. -- U.S. U17 Women’s National Team attacker Toni Payne commonly goes by the not-so-surprising nickname T-Payne. On Saturday, she was just a pain for China.

The electrifying midfielder dipped, dashed, and darted her way through the China U17 WNT defense on her way to two goals in the first half that helped the U.S. U17 WNT cruise to a 5-1 victory.

Saturday’s clash against China was the second meeting this week between the two World Cup-bound squads. The U.S. won the first meeting 2-1 on Wednesday, but it was hardly a convincing performance.

However, the weekend replay put all doubts to rest regarding the readiness for this team in preparation for the upcoming World Cup, which kicks off on September 22. 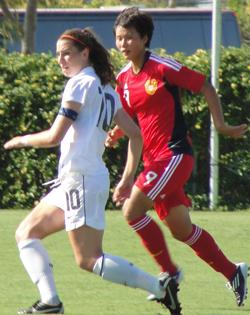 “After today’s game, we are ready,” U.S. U17 WNT head coach Albertin Montoya told TopDrawerSoccer.com. “With the result we had and the way we played, I feel good. If we would’ve been going off of Wednesday’s game, I’d be worried.”

Jenkins started the onslaught of goals on Saturday when she finished off a corner kick in the opening moments.

Minutes later, Payne (Concorde Fire) scored her first of the afternoon off a clever assist from Green. The roaming striker picked up the ball about 30 yards from goal and put on a dribbling clinic.

With all of the eyes locked on Green, Payne sneakily skated behind her mark and made an off the ball run toward goal. Green paused with the ball and then perfectly fed Payne’s run.

The teenager from Alabama made quick work of it to double the U.S. lead.

“We never really got in behind the defense with our midfielders in the first game,” Montoya said. “It was a great run by Toni [Payne] and she just put it away.”

Minutes later, Payne duplicated the effort with another smart run past the defense. This time, outside back Brittany Basinger (FC Virginia) found her with a tidy diagonal ball.

The goalie managed to slow Payne down with a well-timed sliding challenged, but the speedy attacking midfielder held onto the ball despite the minor speed bump. Payne ripped her shot into the open net to stretch the lead to 3-0.

China had two golden chances to get back into the mix before half.

Both came due to turnovers out of the defensive third by the U.S. The first was a miscommunication between Madeline Bauer (Slammers FC) and Andi Sullivan (Bethesda SC) on a pass from the center back into the midfielder.

The pass was intercepted by one of China’s midfielders who quickly sprung the attack to a winger. The winger, unselfishly, picked out the lone striker at the six-yard line for what looked like an easy tap-in.

However, left back Gabbi Miranda (Colorado Rush) had other ideas and impressively headed the shot off the line to keep the clean sheet.

Only minutes later, China caught U.S. goalkeeper Carissa Miller (Sereno FC) in possession for another good opportunity. The striker stole the ball off Miller’s foot, and then passed it back to a midfielder who nervously hit her effort way over the crossbar.

The action slowed in the second half until Montoya brought on Emily Bruder (Utah Avalanche), who contributed two assists in the 30 minutes she was on the field.

In the 75th minute, Bruder fed the ball to Jenkins, who beat the high line defense, on a well-weighted pass over the top of the backline. Jenkins had no pressure on her and easily put the ball in the back of the net for her second of the game.

China cut the deficit to three again five minutes later with a cracking effort from the left midfielder.

However, the vibrant U.S. attack put the issue to bed only seconds after the referee put the ball back in play.

Bruder slotted in a square pass to Green who scored the final goal of the game against a tired and defeated backline.

“We shut down their number 8 and number 20 [China’s two center midfielders] today, which is something we didn’t do on Wednesday,” Montoya said about the difference between the games.

The U.S. relied on a more active midfield trio, which contributed to much of the success in winning the ball back and not allowing China to string long passing sequences together.

“I have no idea who played in that last game [on Wednesday],” Montoya continued. “I have never seen our team play that poorly. It happens to every team around the world – they have one of those games you just never want to see again – that happened Wednesday.”

While much of the focus was on the improvement from Wednesday to Saturday on the collective level, there were individual performances from Payne and center back Elizabeth Raben (Colorado Rush) that made a huge difference. Raben was the physical and calming presence that the U.S. lacked during the midweek fixture. And Payne was obviously a huge plus with her speed and nose for the goal.

Captain Morgan Andrews (FC Stars of Massachusetts) was also back to her normal high standard on Saturday with multiple interceptions in the middle of the field and pinpoint accuracy while switching the point of attack.

Unjustly, Miller’s day was defined by the sloppy giveaway, but she was solid in net beyond the minor hiccup.

Lauren Kaskie (Heat FC) showed once again how effective she is when on the field. The midfielder only played 18 minutes on Saturday, but had a role in two goal-scoring opportunities.