Don't miss our profile of the U17 team down in Guatemala in parts one, two, three and four.

Months of preparation now boil down to a ten-day stretch in Central America for the U.S. U17 Women’s National Team.

The training camps and trips to California, Florida and Spain were all completed with an eye on this week, the CONCACAF U17 World Cup qualifying tournament. The U.S. U17 WNT begins its qualifying effort on Thursday, May 3 and has been putting in all that work for this moment.

“We’ve been preparing pretty hard here for the last few months and we’ve had some good results,” head coach Albertin Montoya said. “I’d like to think we’re ready, but you never know.”

The preparations put into this week have been substantial in 2012. Starting in February, the group has completed a series of domestic training camps under Montoya, as well as a trip to La Manga, Spain, for the Ten Nations Tournament back in March. 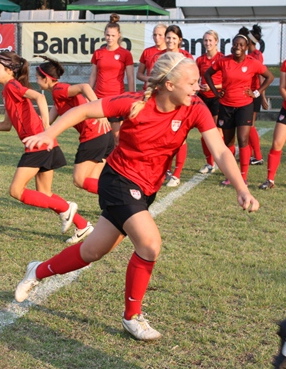 “The first few days it’s just getting acclimated, getting used to the conditions – weather, hotel, climate, all that stuff,” Montoya explained. “And then obviously just fine-tuning a few things, going over our set pieces, going over different scenarios that we may face just so that we’re prepared.

“It’s really the finishing touches, as a coaching staff. We feel we’re at a pretty good spot, there’s not too much we can cover, it’s just going over a few things to go over and be prepared.”

Montoya has assembled a 20-player group that is comprised heavily of players who compete in the ECNL. All but two of them were included in the trip to Spain, and the time the players have spent together in the lead up has created a strong group dynamic.

That is something Montoya hopes pays dividends in Guatemala, as he believes this is a well-rounded group – not just reliant on a star player.

“It’s really about the team, and over the last few months, we can count on many players, it’s not just one individual, and that’s a nice thing,” he said. “The opposition can’t just defend one player…we have players who can step up, whether in the back, in the midfield or up top. That’s exciting to have; we’ve got a lot of special players, not just one or two that we’re depending on.”

That’s not to discount the talent he has at his disposal, as Montoya can call on standouts like Morgan Andrews, Summer Green, Margaret Purce and Sarah Robinson to get the job done.

But adapting and embracing the team mentality is something the players have bought into, recognizing how much of an asset it can be at qualifying.

“The team has really fine-tuned the little details of the game that will end up making a big difference down the road,” defender Morgan Reid told TopDrawerSoccer.com. “Our strengths are very evenly distributed throughout the field from our phenomenal goalkeepers to our dynamic forwards, and the chemistry we [have] that goes beyond the field.”

One thing hanging over the head of this group as they aim to make the 2012 U17 World Cup in Azerbaijan is the fact that the United States failed to qualify for the competition in 2010.

After dominating the group stage, the team tripped up against Canada in the semifinals, getting knocked out in a shoot out after a 0-0 scoreless draw.

It’s something that Montoya is approaching delicately this time around.

“I want to make sure that we don’t put added pressure on our players,” he said. “Yes we’ll remind that, make sure they know we didn’t qualify a couple years ago. But again, don’t want to touch on that too much, it’s all about going out there and playing the best that we can and preparing as well as we can, and just doing the things that we’ve done well in the last few months.”

The pressure is going to be on from the opening whistle, with or without looking back at recent youth national team history. Whatever the case, this team is ready for the challenge.