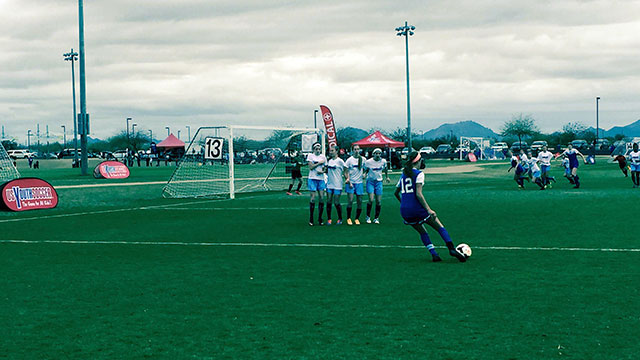 It was all Cal South on Sunday morning at the ODP Championships in Phoenix. Both the 99 and 98 girls teams faced tough opponents, and it took penalty kicks in the first game and a strong second half surge in the final game to secure the championship sweep, but they were able to get it done.

After a scoreless regulation and overtime, it took penalty kicks to ultimately decide the championship game between Cal South 99 and Illinois 99 on Sunday Morning at Reach 11 Sports Complex in Phoenix, with Cal South winning 3-0.

In the second half, Cal South’s Emily Knous, Brooke Redington and Sophia Seraphin all tested Illinois keeper Kelsie Stone again and again and again, but the result was the same every time. Through the end of regulation Cal South had 19 shots on goal, and Stone’s deflections and diving saves kept Illinois in the game. Cal South did manage to score once on a goal by Claire Watkins in the second half, but it was disallowed immediately by an official’s foul call.

With seconds remaining in regulation, Cal South’s Kayla Cannon stole possession and had only Stone between herself and the game-winning goal, but Stone came forward and collided with Cannon, who had to be carried off the field. Regulation ended soon after, and the two overtime periods brought more relentless offensive attacks by Cal South, and more composed defense from Illinois. Cal South had outshot Illinois 19-5 in regulation, and in the scoreless overtime periods the advantage was 5-1.

When it came time for penalty kicks, Cal South keeper Savannah Madden took the game over, stopping all four Illinois attempts she faced. Redington scored first for Cal South, which alone would have been the difference, but Knous and Hannah Sharts also had success on their attempts to bring the PK total to 3-0.

In a game that was meant to start after the ODP 99 championship ended, but instead was nearing halftime when Cal South’s younger team wrapped up their championship win, Cal South 98 scored three second half goals to defeat Iowa and bring home the championship.

The first half was an entertaining display of athleticism and skill as both teams traded shots on goal. Iowa’s Emma Cooper and Regan Steigleder among others put pressure on Cal South’s defenders, who responded by getting stops and pushing the ball up the field time after time. Iowa’s Isabella Blackman responded to the tall task of trying to slow down Cal South’s strikers, and the result was a first half draw.

The second half came down to the physicality of Julie Doyle and Kennedy Smith, who seemed determined to not allow possessions to end without an attempt on goal. Aminatah Kalokah helped direct the Cal South offensive sets and kept the ball in Iowa’s backfield for large portions of the half. In the 48th and 54th minute, Kennedy Smith scored twice to open up a lead on Iowa, and then Smith subbed out for Sunny Dunphy, who scored the third goal in a shutout victory just as she had in Cal South’s semifinal win over Eastern New York.