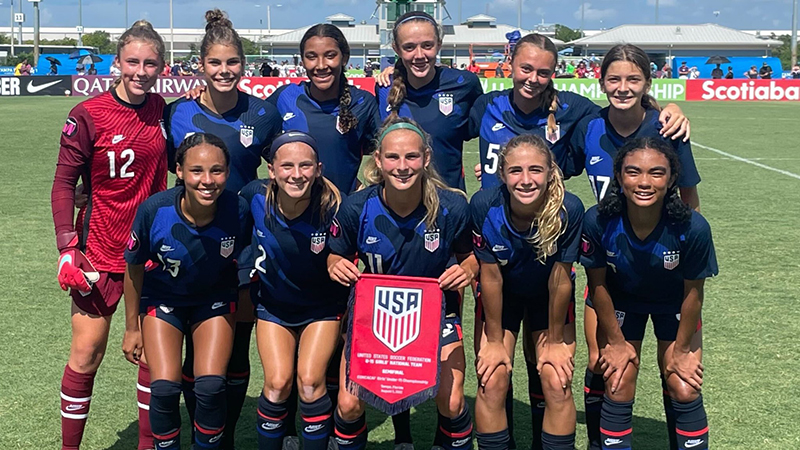 Another impressive offensive effort fired the U.S. U15 GNT to the final of the Concacaf Championship on Sunday.

Kimmi Ascanio tallied in the first five minutes, and the U.S. didn’t look back, beating Dominican Republic by a 6-0 score in the semifinals. Ashlyn Puerta added two goals, Abby Ballek scored and Kennedy Fuller tallied twice from the bench. The U.S. plays in the final on Sunday at 11 a.m. EST.

It only took five minutes for the U.S. to open the scoring. A great ball from center back Alexis Coughlin beat the DR back line, allowing Ascanio to slot home the opener.

Jordyn Hardeman came close to doubling the lead in the 16th minute, but her headed shot was saved by DR goalkeeper Maya Reyes. One minute later, Reyes denied Ayva Jordan on a breakaway, with follow up shot going just wide.

Goal number two finally came in the 18th minute. Great work from Maddie Costello and Jordan down the right side, her cross fell to the feel of Abby Ballek. While the Real Colorado striker was unable to apply the finish, she was able to progress the ball into the path of Ashlyn Puerta, who slotted home past Reyes.

Ballek extended the lead in the 29th minute. The play began at the back once again, as Jordyn Hardeman chipped a ball into space for Ava Harrison. After jetting past the opposing back line, Harrison squared it to Ballek, who made it a 3-0 game with a calm finish.

Three minutes later, Ballek turned provider. Ascanio slotted in Ballek into just enough space in the penalty box. After a slick cut back, Ballek played an enticing cross in front of goal that Puerta finished in the 33rd minute.

Another great play from a defender brought about the team’s fifth goal of the day. Substitute Kennedy Fuller’s fantastic diagonal run from midfielder drew the attention of left back Mya Brandon. The defender played a perfect ball into the path of Fuller, who finished impressively with a left-footed effort.

As the U.S. kept up its relentless attack, it was Fuller that scored again. It was in similar fashion, making a run from midfield into the penalty area. Pfeiffer picked out her run this time, and Fuller cheekily chipped in to make it a 6-0 lead in the 55th minute.

Through four games at this year’s tournament, the U.S. has outscored the opposition by a 30-0 margin. Sunday’s final is a rematch against Canada, which the USA defeated 1-0 on Thursday.