Sometimes, you hear an idea so simple, you are amazed no one has thought of it first.

That is the story of Manhattan Kickers FC’s success.

It is a little club in a big city. With only 60 players currently at the club, it would not even register on a map for the most prominent youth soccer establishments in New York State.

But, MKFC has caught the eye of youth soccer observers recently because there is something weird going on there: it is actually producing players.

Alumni like Maximillan Brown and Alex Muyl, who were among the first players at the club, have gone on to bigger things after starting with the Kickers. Brown was reportedly sought by Manchester City, but denied the opportunity due to work visa problems. 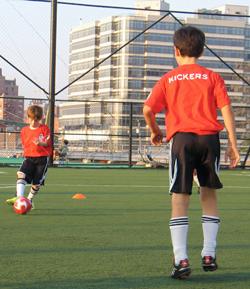 Muyl was one of the last players cut by Wilmer Cabrera from the U.S. U17 World Cup roster last summer. Both players now play with the New York Red Bulls Academy.

Other alumni have found success at European youth academies. Former players Mohammed Al-Khamees and Sal Esposito are highly thought of by their clubs Atletico Madrid and Genoa, respectively.

How could a club with no history, no marketing, and no publicity start churning out players better than most of the top U.S. youth clubs?

It is simple, the club decided to focus on player development between the ages of five to ten.

Rosenthal and his older brother, Curt, began coaching in the club in 2003 and soon split off from the recreational program, which has been around since the 1980’s.

Curt has moved down to Brazil and started coaching with the historic Flamengo Academy. Evan is still running MKFC, developing players, and coaching.

The younger Rosenthal brother seems genuinely as confused as many as to why other clubs have not approached player development in the same manner.

“The way our coaches look after the players is the only sort of difference I can tell,” Rosenthal said as he tried to explain how his club has found success so quickly compared to other clubs. “We really care about our training and developing the players for the long-term.”

Even though he continues to stress there is no magic to his practices, there are subtle disparities that appear to set his club apart from any other domestic youth program.

One of the little distinctions that Rosenthal recognized was the way his club specializes in these ages and focuses on that stage of the development.

“There isn’t much knowledge carryover or institutional memory in youth soccer coaching,” Rosenthal explained. “The typical youth soccer coach will move up with a team to another age group, but if you go to the best European or South American youth academies, you will find a guy who specializes in the young ages and remains there for years.

“We really understand what is needed at the young ages. That is what is lacking at other clubs, it is very rare to find an experienced coach who is working with the youngest kids.”

Parents appear to take notice of that attribute, Sedat Gazko said his son played against MKFC at a tournament and he came away impressed by the way Rosenthal’s team played.

Gazko called the club after the tournament and asked for a tryout for his son, Tarik. Rosenthal immediately accepted Tarik into the program and coached him for three years.

“It felt like a family,” said Sedat. “Evan worked hard to develop players. He prepared the boys to play competitive soccer.”

After Tarik graduated from MKFC, he had trials in the Netherlands, Brazil, and Spain. He spent a considerable amount of time with Atletico Madrid, but had to return to the States due to residency issues. He now plays with the New York Red Bulls Academy.

Tarik is a slight exception in joining the club when he was 9-years-old, most players join MKFC at an even younger age. The majority of the current U12 team has been at the club since they were seven.

Other parents have similar stories about how they heard about MKFC. DeWayne Martin said his son, Henry, was practicing at the same facility with another club when they saw the Kickers. Rosenthal said that Henry Martin’s previous club had him on the “B or C” team, and did not see the potential.

“Evan, and the Kickers, did a great job teaching the boys the fundamentals along with a deep appreciation and love for the game,” said DeWayne Martin. Henry Martin is now a regular in the U.S. youth national team program with the 1997 group and plays for New York Red Bulls.

“MKFC's understanding, dedication and patience with the youngest of players is truly remarkable,” said Alexander. “[My son] Nolan is truly excited for each session whether it's entirely technical or the boys are playing in small-sided games.”

Although there are not many spots at the club, it is not a very selective process. Rosenthal said they take pretty much anyone who shows up to some extent.

But he does have high expectations for the players, as he expects the foundation of a good player to be in place before any player graduates from MKFC after the U12 team.

“By 10 years old, a kid should have all the skills to be a good player,” said Rosenthal. “If you look at a really good 10-year-old player in a top soccer nation, the way the he moves and his skills are similar to a professional player – he can juggle the ball 100 times, strike and receive the ball with both feet, and has plenty of ideas when he's on the ball.”

Rosenthal’s aspiration for his club’s future is a little club in Argentina called Club Parque. He has never been to the club, but he knows the tales of the Buenos Aires youth futsal academy.

“At one point, there were six [Argentina] national team players from this club that only goes to U12,” Rosenthal said about Club Parque. “Their club is sort of the ideal model that I would imagine for the Kickers.”

Many may consider that an ambitious dream for the tiny club, yet ingenuity and ambition is what got the club here in the first place.