A pair of usual suspects are favored heading into the upcoming season in another conference that saw a handful of programs leave for new leagues. Last year’s successful programs La Salle and Dayton both expected to be near the league’s summit this season.

The graduation of top scorer Colleen Williams is likely to get most of the attention, but the Flyers have a quality program that should be able to cope with the departure of one of their best players in school history. Midfielder Juliana Libertin and forward Ashley Campbell both hit double digit goal totals in 2012, and the combination of the two are no doubt going to go a long way in helping the team cope with Williams’ absence this season. In all, eight starters are back on a squad that failed to make it into the NCAA tournament despite a quality campaign, and it’s likely to leave the team with a chip on its shoulder in 2013. 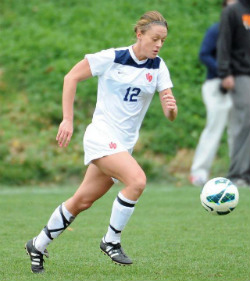 Another step forward for second-year head coach Al Alvine and the Dukes isn’t a bad target after a mostly struggle-filled 2012 season. Alvine has welcomed 14 new faces to his program, likely hoping that a handful of them can plug in and contribute right away alongside returners like Kahli Hale, Abby Weber and Caroline Lacy. In all, the team is quite young with 21 of the 31 players listed on the roster either freshmen or sophomores.

After a middle-of-the-pack 2012, and with leading scorer Kristina Maksuti back in the fold, aiming for a better year in the Atlantic 10 and a spot in the A10 tournament is a realistic goal heading into the upcoming campaign. There is leadership and talent on the roster, players who know the Atlantic 10 well who will aim to lead that push, including seniors Casey Nowakowski and Kaitlyn Carballeira. A double-digit goal scoring season from Maksuti would certainly lay the platform for good things to happen this year.

Nine starters are back in the fold for the lone squad making the jump into the Atlantic 10 for the 2013 season, as the Patriots eye up a new conference against several teams that they’ve never played before. That should present another challenge for the upcoming season. Liz Hodges is likely to be a crucial figure in that quest, as the team’s second leading scorer will look to do one better after the graduation of strike partner Tiana Kallenberger. Senior goalkeeper Lyndse Hokanson provides an experienced presence at the back to help the team keep organized, while Jazmin Cardoso and Nicole Clark will look to get that done in the middle of the park.

Second-year head coach Sarah Barnes managed decently outside of the Atlantic 10 in 2012, with a 4-4-1 record. But conference play saw the Colonials lose their first eight games of the A10 slate, a performance that needs to be flipped on its head if the team wants to improve. Among the returners this year include defender Melanie Keer, a senior who led the team in minutes played with 1,507, and Kristi Abbate, a midfielder whose three goals and two assists netted her a spot on the Atlantic 10 All Rookie Team.

There’s a lot to like about the defending regular season and conference tournament champion Explorers. After only losing a couple pieces from last year, La Salle is poised to once again impress in the Atlantic 10. The decorated senior trio of Renee Washington (8 goals, 7 assists) and defenders Ashley Chilcoat and Courtney Niemiec provide as good of a foundation as any in this league. The one big question is going to be in goal, where Gabby Pakhtigian’s early graduation means the preseason will also serve as a goalkeeper tryout as the Explorers look to make another run to the NCAA Tournament.

Midfield sensation Moa Mattson elected to return to her native Sweden and play professionally there, leaving the Minutewomen a big gaping void. Without its 12-goal scorer from a year ago, UMass must find a new source for offense, as Mattson accounted for almost half of the team’s 2012 goal total. The second leading scorer was Jackie Bruno with three, while senior forward Brittany Moore will certainly work hard to earn more playing time and possibly contribute more in 2013. Grace Coombs will anchor the team’s defense alongside fellow veteran Lauren Skesavage, as Massachusetts shoots for a conference record above .500. 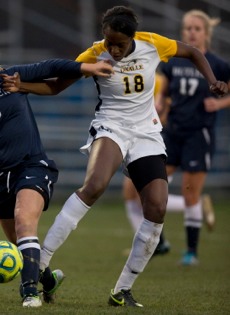 Third-year head coach Michael Needham continues to steer Rhode Island in the right direction. Last season, the team finished with an overall record above .500 for the first time since 2007, clearly a sign that he has things trending in the right direction. Next step? Pushing the team towards a spot in the Atlantic 10 tournament  and eclipsing the .500 mark in conference play seems like a logical and achievable goal for the Rhodys. And there are a lot of experienced players from last year to help in that push, including midfield maestro Jennifer Barrientos, who led the team in total points (4 goals, 7 assists). Overall, it’s an experienced bunch, with co-captains Daiann Selitti and Lucy Gildein taking the on-field leadership reigns as the program pushes for more success in 2013.

While the preseason favorites may be elsewhere in the conference, it would be dangerous to sleep on the Spiders. Led by two-sport star and U.S. U20 WNT forward Becca Wann (who also plays basketball), Richmond can certainly turn heads this season with the attacker on the roster for a full season this time around – Wann missed a significant chunk last year while on U20 World Cup duty. It’s far from just Wann, of course, as she is one of five in a strong senior class that includes midfielders Crystal Koczot, Kristen Lybert, along with forwards Erin Layne, Jensen Smith. With that quintet, it’s a safe bet that the Spiders will eclipse last season’s mark of goals scored, which was a relatively disappointing 21 when considering the talent they have. Expect to see this team, at minimum, make a return to the Atlantic 10 conference tournament.

A total of 17 players return to the fold this season, and with that kind of experience there is every reason to believe the Bonnies can make a run at a conference tournament spot. Last season’s nonconference record wasn’t anything to write home about, but it clearly helped somewhat as they did put together a three-game winning streak to wrap up the season. And with an exception here and there, a lot of the big pieces at both ends of the field are back, including midfielder Brittany Charles, forward Molly Curry and midfielder Gabriella Balseca. Starting stronger this year is also likely to be a focus, after the team began the 2012 campaign by going winless in the first seven games (including six losses).

Can Mo Hawkins earn Midfielder of the Year honors for the third year in a row? Surely that will be one of the biggest storylines for the Hawks in 2013, as the Philadelphia school has a solid blend of youth and experience heading into a new campaign. Hawkins will certainly have the chance to write her name in the program’s record books in her senior season, but she’s far from the only fourth year player looking to make a splash. Forward Shannon Farrell, defender Morgan Circe, forward Morgan Duffy and defender Nicole King are all entering their penultimate seasons and will no doubt aim to click right away and cap off their collegiate careers on a high note.

Eight starters are back from the 2012 squad, but they’ll be adjusting to life under a new coach, as Katie Shields took the reins in Saint Louis after former head coach Kat Mertz bolted for Oregon. Shields is no stranger to the program of course, having served in 2012 as an assistant to Mertz. Improving in the final third has to be one of the primary focuses for the Bilikins this fall after mustering a paltry 14 tallies in 18 games. And there is no shortage of experienced options up front, as senior forwards Maddie Gebauer, Jenny Hummert and Kailey Pretzlaff are all likely to be at the heart of any sort of offensive renaissance, which holds the key for SLU to make improve significantly in 2013.

Another program with a new face in charge, Virginia native Lindsey Vanderspiegel took over VCU after two successful seasons with Georgia Southern. She’ll have a lot of options to choose from in her new position, with the return of offensive talents Courtney Conrad and Maren Johansen, who are two dangerous weapons. Freshman Alexandra Wong is one of many new faces tabbed who can possibly make a difference and help the Rams possibly contend with favored La Salle or Dayton.