Projecting and predicting the full Division I men’s soccer tournament field is no easy task.

Some at-large programs are in the process of fighting for their tourney chances, with some needing conference tournament titles in order to lock things up. 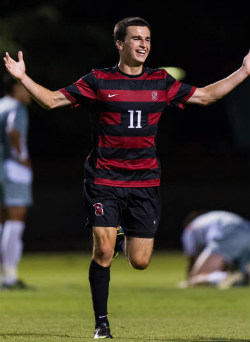 Here’s a look at some teams on the bubble and what their chances might be on Monday. Note that the listed RPI reflects the ranking released Nov. 10.

Butler
RPI: No. 50
Notable Results: Wins at Louisville, vs. Xavier, at Xavier
Rundown: Firmly on the edge of the bubble, Butler is making a late push towards an at-large bid. Back-to-back wins over Xavier is playing a huge part in that, and it could all come down to Friday’s semifinal game against Marquette. An upset at PPL Park – the Bulldogs lost the regular season matchup 3-2 in overtime – could be the right combination of a marquee win and RPI bump that gets them in. As of right now, a loss likely means they are out.

Creighton
RPI: No. 17
Notable Results: Wins over Old Dominion, St. John's, road draw with Georgetown
Rundown: The Bluejays are as close to a lock as you can get, and they might not even belong on this list. While the move to the Big East has been an obvious challenge – head coach Elmar Bolowich drew up a non conference schedule when they were still in the MVC – making the big dance shouldn’t be a big worry. After a Big East tournament loss to Providence on Tuesday, they’ll drop in the RPI, and the question will be whether or not they would host a first-round game in Omaha, as the Bluejays have struggled away from Morrison this season.

Dayton
RPI: No. 79
Notable Results: Win at Ohio State
Rundown: Despite an impressive record on paper – the Flyers have a 14-2-2 mark to this point – the lack of any impactful victories is likely to be a death knell for Dayton’s tournament chances. A shootout loss against La Salle on Thursday, barring a shock selection, was their last game of the season.

Duke
RPI: No. 42
Notable Results: Win at Clemson, vs. Elon, draws against North Carolina and Virginia
Rundown: Failure to come away with anything against Notre Dame this week might’ve been the difference for the Blue Devils between feeling safe and having to sweat things out on Monday. Clemson could even help out Duke’s chances by upsetting Maryland on Friday night at the ACC tournament, possibly giving Duke a nudge up in the RPI. Even without that, there just might be enough here for Duke to sneak into the field.

George Mason
RPI: No. 46
Notable Results: Draw vs. VCU
Rundown: Another team with a quality record firmly on the bubble, the Patriots got their Atlantic 10 tournament off to an ideal start by simply staying alive, advancing on penalty kicks after a 0-0 draw against Saint Joseph's. They are one of a handful of A10 squads that need to go as far as possible in order to truly bolster their chances and feel calm about Monday. The lack of a marquee win really hurts their at large case – the highest ranked team in the RPI that they beat was Denver (at No. 65), as they lost their premier matchups against UMBC and Virginia.

Michigan
RPI: No. 43
Notable Results: Wins vs. Creighton and Wisconsin
Rundown: The Wolverines are now finely poised on the bubble, as Wednesday’s loss against Indiana in the Big Ten tournament leaves them in the lurch and nervously sweating the tournament announcement. There’s no doubting that Michigan lined up a difficult enough schedule to convince the committee, though if they had managed to turn at least one loss against Marquette, Notre Dame, Penn State, Akron or Michigan State into a win, they’d be on much sturdier ground.

NC State
RPI: No. 38
Notable Results: Wins at William & Mary and North Carolina, Draws at Virginia, Duke and vs. Wake Forest.
Rundown: Despite not qualifying for the ACC tournament, it would be a pretty significant snub to see the Wolfpack not included in the field. Two wins against Top 20 RPI programs should be enough to hang their hat on, as the Wolfpack showed the benefits of playing a tough schedule. They should be one of the bubble programs the committee looks to include first when setting up the tourney.

Saint Louis
RPI: No. 51
Notable Results: Win vs. Creighton
Rundown: At first, it’s somewhat shocking to see the Billikins so low in the RPI. But a close examination of their schedule reveals a lack of marquee wins against any of the top teams they faced, as games against Connecticut, VCU and Louisville all resulted in losses. So it could take an Atlantic 10 title in order to get Saint Louis into the dance. But the funny thing is if they do make it, SLU could definitely be a team that makes some noise. Thursday's win against Massachusetts was the ideal start, inching the program closer and closer to safety.

Santa Clara
RPI: No. 48
Notable Results: Wins at and vs. Gonzaga
Rundown: Aside from a pair of wins against WCC rivals Gonzaga (No. 21 in the latest RPI) there is a lack of significant results for the Broncos after a sputtering start to the season. They are likely on the outside looking in for an at large bid, though if they pick up two wins over the weekend – including a must-win game Friday against WCC leaders Loyola Marymount (CA) – they would lock up the conference regular season title and automatic bid that comes with it.

St. John's
RPI: No. 33
Notable Results: Wins vs. Akron, Penn State, Georgetown, draw vs. Marquette
Rundown: Like NC State, the Red Storm are an odd case having not qualified for their conference tournament. But that shouldn’t keep them on the bubble for too long, as they have three wins against top 20 RPI programs, making them a team well deserving of an NCAA tournament spot.

Stanford
RPI: No. 41
Notable Results: Draw vs. Maryland, Wins vs. UC Santa Barbara and California
Rundown: Aaron Kovar’s Wednesday night game winner in overtime wasn’t just a win over a Pac-12 rival – it also likely secured an at large bid in the tournament for Stanford. It may not have been all that close in the end, but two wins against top 10 RPI teams is certainly going to carry a lot of weight with the committee, not to mention the generous nudge it should give to their RPI. Consider the Cardinal safe.

Wisconsin-Milwaukee
RPI: No. 44
Notable Results: Win vs. Marquette, draw vs. Wisconsin
Rundown: The 40-50 range is where most teams in the bubble reside, making Wisconsin-Milwaukee an interesting case ahead of this weekend’s Horizon League tournament. The win over Marquette is a huge plus, but outside of that their resume is thin, as they lost to Horizon League favorites UIC who sits ahead of them in the RPI. A loss against Oakland in the conference tournament semifinal on Friday could derail their chances of a bid, though reaching the tournament final – even if they lost – could end up making the difference.