The women's Big East 2014 season could be provide one of the best conference battles across the nation in Division I soccer.

Last year’s top two, Georgetown and Marquette, graduated a number of talented players all over the field, while the third and fourth place sides, DePaul and St. John's, bring back some big pieces. Three programs enter the season with new head coaches, as it looks to be a pretty wide-open fall campaign.

The Golden Eagles lost a significant chunk of their top contributors from last season's squad that put together a perfect Big East campaign. That includes Maegan Kelly, who scored 39 goals during her four-year career and is the program’s all-time assist leader with 37, not to mention stalwarts like Emily Jacobson and Taylor Madigan. Replacing her offensive output is sure to be a daunting task, but the return of U.S. U23 WNT midfielder Mary Luba and Mady Vicker, who notched eight and six goals respectively last season is sure to be helpful in that capacity. Things are a little more settled at the back, with Amanda Engel set to return in goal, along with senior defender Haley Fritzlen. 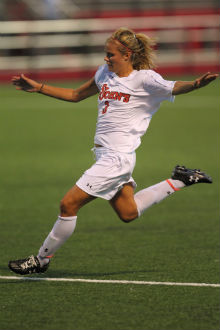 Knocking on the door before finishing second place last season in the conference, the Hoyas find themselves in similar position as Marquette heading into the season – a number of key players from 2013 have graduated, leaving plenty of positions to address on the field. One difference between the two sides is the Hoyas bring back their midfield dynamo, as Daphne Corboz returns. One of the nation’s best attacking midfielders, she could be a dark horse contender for the Hermann Trophy, and will have the chance to team up with her little sister Rachel, a top 150 recruit from PDA, this season. Starting goalkeeper Emma Newins is a senior and will anchor a defense that must address the graduation of Emily Menges, who has gone on to taste success in the NWSL, and Alexa St. Martin.

Should either Marquette or Georgetown drop closer to the pack this season, could DePaul be the team to step up and contend for a regular season championship? Buoyed by Conference Goalkeeper of the Year Alejandria Godinez and her 135 saves, 2013 was one to remember for the Blue Demons. Improving the offensive output is critical here for a side that conceded only 15 goals all last season, and welcomes back Godinez alongside experienced defenders Nina Kodros, Brianna Ryce and Rachel Pitman. Incoming transfer Abby Reed (Indiana State) could prove to be a nice last-minute addition, while last season’s top scorer Elise Wyatt also is back.

The English duo is back and ready to lead the Red Storm once again, as returning Big East Offensive Player of the Year Rachel Daly (23 goals, 4 assists) and defender Georgia Kearney-Perry both are back after producing in a big way in 2013. The loss of Amy Marron will certainly sting, but there’s plenty to like about St. John's chances, including goalkeeper Diana Poulin entering her sophomore year fresh off a campaign that saw her earn All Big East Third Team honors. Daly is sure to garner plenty of attention from opposing defenses this season, making it more important for teammates around her to contribute in the final third in order for the Red Storm to vault into contention.

The search for a potential sleeper in league play, the possibility of continued improvement for the Bulldogs is strong. Junior midfielder Sophia Maccagnone enjoyed a seamless transition to the Big East, scoring 10 goals and notching six assists, while Japanese midfielder Serina Kashimoto provided a steady presense in the middle of the park, and is only a sophomore. The key to climbing the standings will be improving defensively, as Maccagnone should continue to improve on her goal scoring exploits.

A new head coach takes over the Wildcats this year, as Associate Head Coach Fran Kulas was named to the top spot at the end of 2013. He’s no stranger to the team, having been on the staff as an assistant since 2011. Kulas will look to lead an improvement on last fall’s campaign that petered out with one win over its last seven games overall. The good news is a lot of pieces return. Katie Martin (6 goals, 10 assists) is only a sophomore, and can build on a breakout freshman season, while Reanna Marino, Victoria Gersh and Hayley Wilson bring back plenty of experience for the upcoming campaign.

Another Big East program with a new head coach heading into the 2014 season is Providence, as Sam Lopes returned to his old stomping grounds (he was an assistant coach at Providence in 2011-12) in April. He inherits a roster that struggled for portions of last season but has experience, with 12 juniors season and ready to spark an improvement. That includes forward Catherine Zimmerman, whose seven goals led the team last season.

Not to be outdone, the Pirates are the third Big East program that enter the new season with a new coach. Taking the reigns of the New Jersey squad is Rick Stainton, a former assistant coach at Seton Hall. He takes over a program that lost its top scorer from last year in Kaitlyn Ritter, leading creator Ashley Clarke and starting goalkeeper Jennifer Pettigrew, all three who earned All Big East honors. Defender Catherine Chukuka is back to lead the defense, but Stainton has his work cut out for him this preseason to fill those spots on the field.

It was a study of contrasts for the Bluejays in their first season in the Big East. Outside of conference play, things looked rosy, but the rigors of their new digs ultimately saw them win just two of nine games. Can a young team play its way into contention? Last season’s top scorer Kirstyn Corder is back looking for more, and she’ll look to team up with All Big East selection Alyssa Jara to create chances in the final third. While the team did lose some influential players from a year ago, they do seem poised for an improved return the second time around.

A lack of goals in 2013 hampered the Musketeers, especially in conference play, where they scored just seven goals from nine Big East matches. Tori Doss is the highest scoring returning player (4 goals, 5 assists), but she’ll need some help, either from one of the eight freshmen additions, or experienced returners like Catherine Allon or Maggie Hare, in order for the team to improve its offensive output. If they can manage that, look for the program to climb in the standings this season.