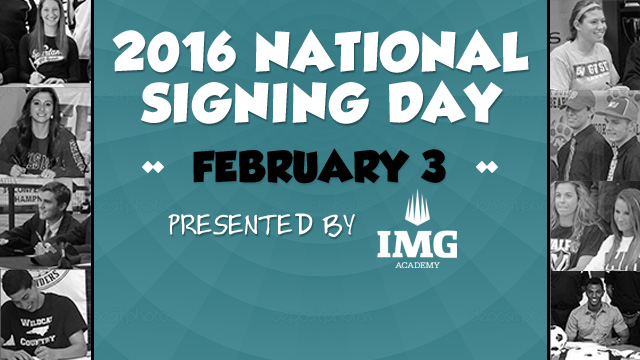 It's the time of the year again. The moment when dreams of launching a college soccer career officially become a reality for thousands of players around the country: National Signing Day.

TopDrawerSoccer.com will once again be your non-stop shop for everything Signing Day related in the realm of soccer. We've amassed a healthy serving of coverage in the run up, and will provide live updates throughout the day as classes are announced.

Oh, and we want you involved too. Tweet us (@topdrawersoccer) or email us your Signing Day photos. Keep an eye out for a photo gallery that will come out after things get rolling. Drop questions in the comment section below. Or Tweet questions to our staff (@travismclark, @willparchman, @jreskilson).

Make sure to come back early and often. Congrats to the class of 2016.

8:14 am: The day is here. The first announcements are trickling out on Twitter, even at this early hour. National Signing Day is officially underway.

8:33 am: Before the day is out, we're likely to hear a lot about the UCLA women's soccer (and men's) 2016 recruiting classes. One new players for UCLA will be Julia Hernandez, a Spanish attacker who is transferring from Eastern Florida State College.

9:28 am: Things are still relatively quiet, although Indiana, Auburn, Tennessee and Rice have all been active in announcing NLI additions on their Twitter accounts.

9:52 am: West Virginia women's soccer has built its success partially on the strength of some exceptional talent from Canada. The latest to join is Goalkeeper Rylee Foster, who was just announced as a Signing for the Mountaineers, looks to become another in the long line of Canuck talent to build a career in Morgantown.

10:15 am: Signing Day drama is rare in college soccer. Perhaps the closest thing (at least so far) revealed was No. 34 recruit Elijah Rice committing to Washington, as reported by our West Coast ace J.R. Eskilson yesterday.

10:43 am: For better or worse, MLS Academies send a lot of their players off to major DI program. UNC Wilmington, a program on the rise, announced the addition of a Houston Dynamo midfielder for this fall.

11:01 am: One of the first big players to officially sign his NLI is Chicago Fire and U.S. youth international Cam Lindley, the No. 9 ranked recruit in the class of 2016.

.@camlindleyUSA has signed with UNC! He was named 2015 @NSCAA Youth National POY! pic.twitter.com/D7cvK8MY9f

11:36 am: FC Dallas has done a tremendous job at buildling a massive youth program with both boys and girls teams. Today the club announced the commitments of 60 players to the college ranks. Look for more of these announcements as they come out today. Oh, and the TDS Photo Gallery is up.

11:46 am: Football attracts most of the attention on Sidning Day, though how about this for a crossover -- Warren Sapp's daughter Mercedes signing her NLI to play soccer at Missouri.

11:59 am: The winners of the contest (the one I just made up) for the first program to put out a Signing Day press release is New Mexico 's men's soccer program. They've got a pretty good class, too.

12:18 pm: Official details of the UCLA women's soccer recruiting class are coming out, and Canadian World Cup vet Jessie Fleming has signed her NLI. Fleming is the No. 10 recruit for 2016.

12:39 pm: Apologies if this is becoming a UCLA-centric day, but the No. 1 recruit Mallory Pugh is officially heading to Westwood.

12:46 pm: Another official release is out. This time it's from Iowa State, who have added eight players, including four from their home state. There's a lot of information flooding in at the moment so bear with us.

12:56 pm: One of the most difficult element of recruting is tracking down the commitment of foreign recruits. Elon women's soccer program has announced the additions of two players from Northern Irelandand Wales respectively. Also, in completely unrelated news, the West Virginia men's program continues to hoover up Sporting KC Academy recruits.

1:17 pm: Another MLS Academy has announced its round of new college players, as D.C. United recently sent out its news. Players from the D.C. area are heading to Maryland, Duke, Virginia and George Mason to name a few.

1:33 pm: It's easy to overlook some of the soccer standouts who are already in college. Some students manage to complete high school, graduate in December, and begin their soccer career in the spring. No program can match Texas A&M's five spring enrollees during the 2016 recruiting cycle. The Aggies have a nice splash page on their soccer homepage, and have announced their entire class.

1:44 pm: Sticking in the SEC, here's an intriguing name to keep an eye on this fall: LSU has announced the addition of the 2015 JuCo National Player of the Year Nicole Howard.

2:05 pm: Okay, last UCLA-related tweet. The Bruins have received their seven expected NLIs for the class of 2016. Here's my story on how it came together.

2:32 pm: The Philadelphia Union are the latest MLS Academy to announce its college destinations. Ten players are set to play DI soccer, with destinations including Virginia, Clemson and North Carolina.

3:12 pm: Some more announcements just dropped. Utah Valley University, Utah Valley men, Auburn and Washington State put out releases. And if you scroll up, remember we have our recruiting class announcements table out.

3:33 pm: Duke men's soccer always seems to land some impressive talent, and checked in at No. 6 in our January update. Among them is their latest announcement, hailing from Crew Soccer Academy Wolves. Veerakone is a smart player, a good passer, and is more likely to feature as a center mid but could play as a defensive midfielder.

3:43 pm: Fifteen players from the Seattle Sounders Academy are heading off to play college soccer. That includes defender Nicholas Hinds, who will play at Akron in the fall. South Carolina women's program has announced its eight signings as well.

4:00 pm: One program facing a substantial rebuild is Georgetown, which lost six players to Major League Soccer. The Hoyas have announced a trio of recruits on Twitter, including the Berkshire School's Ifunanyachi Achara. Could he be a replacement for Brandon Allen's goals? Our high school writer Sheldon Shealer has high hopes for the forward.

Welcome to the Hilltop Achara! pic.twitter.com/9qDV5tIggC

4:39 pm: Don't worry, I'm still here. Even though it's getting dark on the East Coast already. We have a recruiting announcement from the Notre Dame women's soccer program, Loyola-Chicago women, Missouri State, Baylor and Dayton.

Special bonus, as Baylor Head Coach Paul Jobson shares his thoughts on their recruiting class in the video below.

5:04 pm: The Pac-12 women's title race is going to provide must-see soccer this year. And it's more than just UCLA. Stanford snagged back-to-back top recruiting classes in 2013 and 2014, though they've yet to put any news out on Signing Day. California, which will aim to keep pace, nabbed a Canadian youth int'l of its own for 2016.

Another NLI is in, and @LakemanAvery is now a Bear! @CanadaSoccerEN youth international MF joins the #CalFamily pic.twitter.com/fBCMXSkFSp

5:21 pm: Keeping things in the Pac-12, California men's program has revealed a five-player class, while up in the Pacific Northwest, Washington women announced a six-player crop.

7:37 pm: Stepped away for a few minutes to take care of dinner. We have commitment announcements from Arkansas, Rice, Arizona State, UTEP, Indiana (men's and women's) and Tulsa women's soccer to name just a few.

Excited for my future at @UVAMenSoccer .Just can't wait to reach that next level in my career ⚽️ #SigningDay pic.twitter.com/SKBeYoGWOM

9:05 pm: Fans of Major League Soccer may know the name Sigma FC, as its alumni include 2015 Rookie of the Year Cyle Larin, and recent draft pick Richie Laryea. The Canadian club will send at least three players from the class of 2016 to major DI programs, including Richie's younger brother Reggie.

9:36 pm: Among the announcements recently spotted at this late hour are SIUE women, Arizona and Texas State.

9:41 pm: We're not the only ones still working on Signing Day content at this hour.

9:49 pm: There is just one recruit ranked in the final Top 25 of the 2016 recruiting class rankings. And that's Jordan Harr, the No. 8 player. She's part of a seven-player class heading to Texas Tech.

10:38 pm: Time to call it a day. Thanks for sending us Tweets and photos. Be sure to check out the photo gallery, and we'll be posting links to recruiting class announcements right here as the 2016 campaign draws closer. Congrats to all the 2016 graduates and future college soccer players.