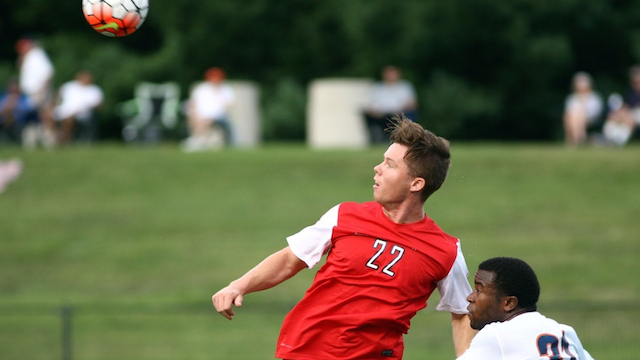 Nearly everything is new this season for Winthrop, last year’s conference tournament champions. Daniel Ridenhour is the new head coach of Eagles. The team only returns three starters from last year, but senior forward Max Hasenstab will miss this season due to injury. Marco Gatzke and James Skonicki are the only starters returning, which puts a lot of pressure on those two to keep this program near the top of the conference this fall.

Radford was the pre-season favorite in the coaches’ poll. The Highlanders bring back 2015 Freshman of the Year Sivert Daehlie for his sophomore campaign. Daehlie scored 13 goals in 19 games last season. The forward was selected as the Big South Preseason Attacking Player of the Year. The Highlanders also return senior Norwegian defender Jo Vetle Rimstad.

Campbell returns all of the key pieces of the defense from last season. The Camels recorded three shutouts in conference play last season and should improve on that mark this fall. A strong defense should help compliment the returning core of Seth Jones, Josh Signey, and Sam Butts.

Longwood is rolling into 2016 with high hopes and a promising group of returners. Will Miezan had a great debut season in 2015, and he will be counted on as the focal point of the Lancers attack this fall. Marten Pajunurm is set to lead the defense, as the Lancers search for a spot in the NCAA Tournament.

High Point’s sophomore center back tandem of Rashid Tetteh and Johnny Fenwick finished last season with a 0.83 goals-against average. Tetteh and Fenwick are back for another go and should have the Panthers near the top of the conference for this season and the foreseeable future.

The Bulldogs of UNC Asheville are trying to exceed the expectations for this season after being selected seventh in the preseason poll. Forward Zach Joens is the one to watch after leading the team in multiple categories this season.

With 14 freshmen and only four seniors on the roster, Gardner-Webb is a young team this fall. Marvin Mendy, last season’s leading scorer, is back for his junior campaign. Mendy scored four goals in 2015.

Seniors Jeremy Lee and Kyle Carr lead the way for Liberty this fall. Lee, a goalkeeper, started every game last season with a 1.48 goals-against average. Carr, a defender, had a goal and two assists in 17 games last fall.

Jonathan Potter enters his first season as the Presbyterian head coach. Potter was previously the assistant coach with Elon. The new head man with Presbyterian has a lot of work ahead of him. The Blue Hose failed to record a win in 2015.

UNC Greensboro returns eight starters from last season’s regular season championship side. SoCon Frehsman of the Year Leeroy Maguraushe is back for his second season with the Spartans. Maguraushe is the leading scorer among returners with 18 points to his name. Hugo Coicaud, Jon Milligan, and Matteo Busio are among the rest of the core group of returners.

Jordan Duru and Will Bagrou are back for Mercer. Bagrou and Duru combined for 12 goals and 11 assists in 2015. The duo makes up one of the best attacks in the conference. Mercer will need both to be sharp this fall to stay near the top of the conference.

Furman won the conference tournament in 2015 and snagged the automatic berth to the NCAA Tournament. The Paladins’ need to replace Sven Lissek in goal, but Jonathan Smith looks like the replacement based on the preseason result against Wake Forest. Furman brought in a stacked recruiting class to help carry the load this fall.

East Tennessee State returns the majority of starters from last season’s team. The Bucs are counting on the veteran experience of Jonny Sutherland and Fletcher Ekern to lead the way this fall.

Matthew Aurednik is one of the best in the SoCon and he is back for his senior season this fall. Aurednik is joined by a talented tandem of sophomores in Connor Donohue and Kyle Nelson, who are hoping to lead the team into the top half of the conference this fall.

VMI has a new head coach this fall as Michael Bonelli takes over after previously coaching for Saint Mary’s University in San Antonio, Texas. The Keydets need someone to improve the quality of the roster and change the mentality of the program, as they failed to win a game in 2015.

Denver has won three consecutive Summer League Championships. Jamie Franks is doing tremendous work with the program, as it appears to get better with each season. This season should be the showcase campaign for senior defender Reagan Dunk. Dunk is one of the best defenders in college soccer. Kortne Ford, Sam Hamilton, and Andre Shinyashiki also return to Denver after being named to the All-Summit League First Team in 2015. Freshman Tobi Jnohope is one to watch as well.

Omaha has potential to be one of the best attacks in college soccer this fall. Senior Mark Moulton is the catalyst of the attack, but freshman Elvir Ibisevic could end as the leading scorer as he has been on fire during the spring and the preseason.

Summit League First Team forward Matthew Rogers is back for his senior season with Oral Roberts this fall. Rogers scored seven goals in 2015 to lead the squad. He is one of five seniors on the roster.

Drew Whalen, the 2015 Summit League Offensive Player of the Year, is back for his junior season this fall. Whalen scored 10 goals in 16 games last season. Whalen looks to be the player to watch on the Leathernecks this fall.

Jacob Murphy and Zach Tom are top two returners for IPFW for this season. Murphy earned a spot on the Summit League Second Team while Tom was a part of the All-Newcomer Team. With only two freshmen on the roster, the Mastodons are counting on a veteran roster to help lead the team this fall.

After giving up 28 goals in 2015, IUPUI’s goal for 2016 is to improve the defense. The Jags are shaping up the defense to have a chance at running at the top of the league this season. The Jags also have to replace leading scorer Clint Hoffar, who was a senior last season.

Hartwick rolled to the title in the Sun Belt last season with a perfect record. The Sun Belt champs put up a good fight in the NCAA Tournament but lost out to Dartmouth in the first round. The new season offers another chance for the Hawks. Key players Jamie O’Grady, Kit Tregear, and Lenny Wilson are all back.

Georgia State junior Rashid Alarape enjoyed quite the summer. The forward trained with the Nigeria U23 Men’s National Team in Atlanta prior to the team heading to the 2016 Olympic Games in August. Alarape is looking to lead the Georgia State attack this fall.

John Murphy took over as the head coach at Georgia Southern this offseason. Murphy was the associate head coach at Boston College for the past two seasons. Nick Wells and Hunter Loyden are the key pieces for Murphy’s program this fall.

Appalachian State returns six starters, but there is a new head coach in charge of the Mountaineers this season. Jason O’Keefe takes over in Boone. Senior forward Stephen Chapman is the top returner after scoring seven goals last season.

Phillip Gyau is hoping to right the ship with Howard. After a number of unsuccessful seasons, the Bison are trying to revitalize the soccer program. Gyau’s group snagged two draws in 2015. It’s going to be a slow process to get this program into the top of the conference.

Coastal Carolina joins the Sun Belt this fall. The Chanticleers are immediately the favorite in the conference and among the best programs in college soccer. Based off the preseason result, Robin Bjornhom-Jatta might be the player to watch this season.