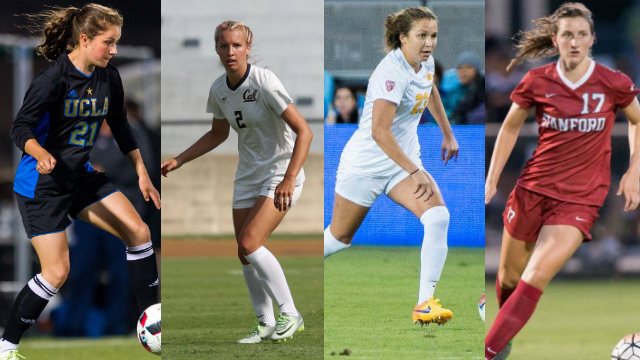 The Pac-12 is shaping up to be something special this season, with some of the best recruits in the country joining up to several already talented behemoths.

Stanford, UCLA and California landed the top three recruiting classes in the country, and that injecting of talent is sure to only increase the competition on a conference that’s dominance in the coming years seems inevitable.

Heading into a new season, the Cardinal sit atop the heap once again. The No. 1 recruiting class adds the one thing that the team lacked in 2016 – a dominant goal-scorer. Civana Kuhlmann, Catarina Macario and Madison Haley are plenty of capable of evolving into that go-to player in front of goal. Senior midfielder Andi Sullivan’s ACL recovery seems to be going well, and she’s expected to be ready to go for this season. Transfer addition Samantha Hiatt provides a center back option to replace center back Maddie Bauer, and Alison Jahansouz and Lauren Rood will compete for minutes in goal.

While college soccer fans won’t get to watch Mallory Pugh in a Bruin jersey, UCLA will suffer minimally from her decision to turn pro. Ashley Sanchez, the top ranked recruit in the class, is a big reason why. The combination of Sanchez and Canadian star Jessie Fleming alone would be worth watching, though when Marley Canales is added to that, and the dynamic Hailie Mace is moved up front, UCLA has enough going forward. The youthful nature of the roster might suggest that the Bruins may not be able to keep pace with the Cardinal, though there’s little question the talent is there.

With its star spine from 2016 all in the NWSL, USC will be hard-pressed to defend its national crown. That’s not a knock on the current roster – which features plenty of returning talent, including Alex Anthony, Ally Prisock and All-Pac-12 Freshman Team honoree Julia Bingham – but more the impact of losing Morgan Andrew, Sammy Jo Prudhomme, Kayla Mills, Katie Johnson and Mandy Freeman. Joining the group is Savannah DeMelo, who sat out the 2016 season on U20 World Cup duty, Tara McKeown and Arlie Jones.

If a program could pip Stanford or UCLA to the regular season title, California is a prime contender. The Golden Bears did lose two big offensive pieces as both Ifeoma Onumonu and Arielle Ship were drafted in the NWSL. Reinforcements are waiting in the wings, as both Abigail Kim and Mia Corbin can bring the same kind of dynamic element to the team, while the freshmen additions are impressive. They include Swedish forward Emma Westin, New Zealand midfielder Daisy Cleverly, U.S. youth national team veteran Emily Smith and midfielder Luca Deza. The defense should be solid, with one of the best goalkeeper’s in the country in Emily Boyd, with Indigo Gibson and Haley Lukas in the back line.

Transfers played a big part of Colorado’s transformational 2016 campaign, and the program reloaded with a few more significant, experienced additions. Jorian Baucom will try her luck for one season in the Pac-12, and she certainly has the athleticism and pace to be successful. Senior Becca Rasmussen and junior Cassie Phillips are also amongst the new faces. But the team’s ability to enjoy continued success will hinge on the familiar players, including goalkeeper Jalen Tompkins and midfielder Taylor Kornieck.

Continuing the trend of young but talented teams, Utah is fresh off its first Round of 16 appearance in program history. Targeting at least that outcome is in reach, when considering the caliber of returning players: junior forward Hailey Skolmoski and defender Tavia Leachman both excelled last season, and if they take a step forward, the Utes will be in good shape.

The Pacific Northwest quartet battled through the 2016 season, and all four will look to start trending back up. Getting Kim Keever and Shannon Simon on track and leading the team’s offense will be crucial for Washington to make that jump. Midfielder Amanda Perez also returns to the fold after redshirting last fall with injury. The team is working in nine newcomers in the preseason, and meshing them quickly on a talented difference could be the difference as they aim to make another NCAA Tournament appearance.

Scoring goals was problematic at times for Washington State, which mustered nine goals in 11 Pac-12 games, and just 23 overall. The good news is that leading scorer Morgan Weaver is only a sophomore, and if one or two freshmen can kick on and make an immediate impact in the final third, the Cougars could spring a surprise.

Nine starters are back at Oregon, which is looking to make a breakthrough NCAA Tournament appearance. Given the caliber of the Pac-12, simply finishing above .500 could be enough to sneak in with an at-large bid. In-state rivals Oregon State will look to do the same after winning three times in conference play. Goalkeeper Bella Geist earned a call-up to the U.S. U23 Women’s National Team this year and will be a critical last line of defense in goal.

Finally, in Arizona, both Arizona and Arizona State look to vault up the final standings. The Wildcats have one more season of Gabi Stoian leading the charge in the final third, as she looks to make a big impact after picking up First Team All-Pac-12 honors in 2015. If other players on the roster can step up to provide support in the final third, good things will come.

It’s a new era over at Arizona State, with Graham Winkworth making the jump after excelling at South Alabama. There’s a big difference in the Pac-12 than the Sun Belt, so it’ll be interesting to see how Winkworth fares. One intriguing name to watch is a player that Winkworth brought from South Alabama, English defender Jemma Purfield. The left-footed defender will need to prove that she can cope with the raised level, though she has the quality to adjust and should become a key piece in her final two seasons of eligibility. Between her and the eight returning starters, ASU could surprise after being picked to finish 11th in the Pac-12 preseason poll.