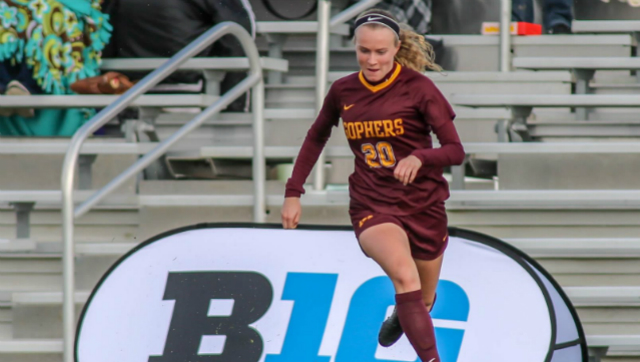 The 2019 NWSL Draft is slated for this week, with pro hopefuls eager to have their name called on Thursday, January 10 in Chicago.

An interesting year is on the cards for the league, with it being a World Cup year and pre-competition tours set to limit the amount of top-tier U.S. talent available to teams for large chunks of the season. That could open the door for more rookies to get minutes than normal, although that requires being able to play the waiting game and spend a large portion of the upcoming unsigned.

Regardless, there are a number of intriguing players available at next week's draft. Below is the first part of the Top 40 draft class ahead of next Thursday's big event, starting with a number of other names to watch.

A torn ACL knocked Smith out for the season, though for a team that’s dug deep, she could end up as a potential outside back in NWSL for a patient team. Smith’s a bit undersized at 5-foot-4 but makes that up with the kind of motor and athleticism that suits the league. It's unlikely that she gets picked on draft day, though she's a sleeper some teams might keep track of as her recovery takes place.

A quality attacking player for Saint Louis during her collegiate career, Pokorny's coming off a strong senior season and is an intriguing, late-round attacking prospect.

Cerny’s been a hit in the Big East during her four years, showing the ability to make a consistent impact and difference in the final third. A smart player that has a decent engine to create problems, she is comfortable with the ball at her sleep, slipping teammates in behind and connecting play with her teammates.

The Big Ten goalkeeper of the year is one of a couple of contenders looking to hear their name called on draft day. There's not a great deal of depth in the position and it will be one of the stories to watch in Chicago. Kerr is one of the shot-stoppers that has a chance at hearing her named called, as she looks the part -- decent size, can move well and certainly earned plaudits from the Big Ten conference coaches. The Canadian also comes to the draft with an American passport, so she could get a look in the third or fourth round for a team looking for a backup to groom.

The Ivy League Offensive Player of the Year wrapped up an impressive career in Princeton and now looks to follow in the footsteps of fellow Tiger Tyler Lussi and make it to the NWSL. A native of Texas, she scored 43 times during her four seasons, hitting double-digits in all but one season. Her ability to connect with teammates or setup fellow attackers in the final third is potentially a concern, as she had just nine assists. Then of course, the step up from the Ivy League to the NWSL is significant. However, Asom’s a direct, pacey player that can certainly be a success in the league.

Versatility is an asset for NWSL rosters, and Skolmoski fits that bill. A four-year standout that can play both in attacking and defending roles, the Utah native is likely to be very high on the list for the Royals to grab in the third round. Tough and competitive, Skolmoski is well-tested after competing in the Pac-12 for her career and potentially profiles best as an outside back; though she's good enough at a number of spots to get drafted.

The netminder can easily stake a claim as one of the best goalkeepers in the class, despite her flying under the radar during her career at Miami. A phenomenal athlete that’s listed at 6-foot-1, Tullis-Joyce has interesting tools to succeed in goal. Moving to Europe where she can play more immediately and continue her development is certainly the better outcome.

An intriguing defender that can play left back or center back, Jackmon fills a need and could sneak into the draft thanks to the combination of her profile at a Pac-12 program and having intriguing physical tools. She has a got a good motor and can get forward to combine with her teammates to contibute as an attacking option as well.

Products of smaller programs can get overlooked on draft day, though Hubert has potential to deserve a look. Likely to slot out wide in a front three or as a true winger, her Canadian citizenship is the talking point here. If she can get a look in a preseason camp, she could be ready to get called up when players leave for World Cup preparation, as she has intriguing elements to her game, whether it's her combination play or ability to find space in behind opposing defenses.

Part of the program's surge over the past couple of seasons, James is one of the best pure defensive midfielders in the draft. For a team that doesn't necessarily value connecting play through midfield, James is a hard-working player that will do some heavy lifting centrally. She can also get forward into the box and finish chances, as she showed with a decent scoring record at the Big 12 program.