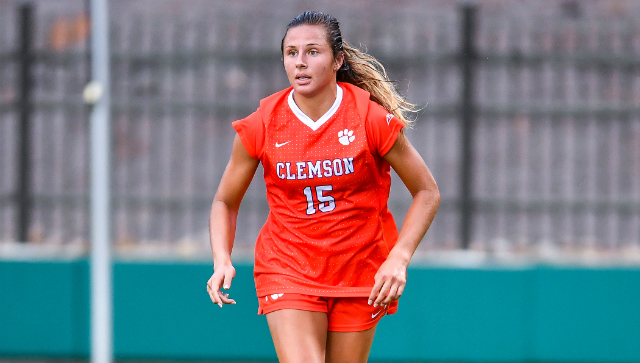 Time is ticking away towards this year's edition of the NWSL Draft. Top prospects will learn their fate starting at 11 a.m. EST on Thursday, January 10.

Below are prospects ranked 11-20 among players expected to be available for the draft.

The Canadian youth international’s been a fixture during her four seasons in Morgantown, continuing the tradition of Canucks enjoying success at the Big 12 side. A move abroad wouldn’t be a shock for the right back, who can certainly defend well but needs to sharpen up her ability to influence the game in the final third to truly blossom in the pro ranks. There's also the issue of her international status, although that didn't scare teams away from fellow Mountaineer Amandine Pierre-Louis last year.

Boasting a slew of potential pros, Xiao’s an exciting left-sided player that can roast defenses with the ball or find ways to ping around opposing defenders with an excellent passing range. The Pac-12 Scholar of the Year, it wouldn’t be a shock to see her pursue a career off the field and bypass the chance – which is reflected by her absence from the draft-eligible list.

The former U.S. youth national team standout enjoyed a very good career in Durham, leading the program to a pair of College Cup appearances and 68 wins as part of its decorated senior class. Racioppi finished with a career-high in goals scored as a senior, finding the back of the net nine times. A smart player and a decent passer, she’ll need to find ways to impact the game on both sides of the ball to succeed centrally in NWSL, but Racioppi’s certainly a candidate to get picked in the first round. Like Xiao, she may end up not pursuing a spot in the league, as she's yet to declare.

Part of one of the top defenses in college soccer during her time in Evanston, Sharples excelled in the Big Ten, playing almost every game she could for the Wildcats. There’s no doubting her quality at the college level, but it’s more about if it translates against the pacey attackers the NWSL throws at her when evaluating her pro prospects. For a team that defends deep, she should adjust and do just fine, given her positional sense and ability to handle pressure with the ball. In the right system, she ought to be able to claim a roster spot and potentially see minutes in the upcoming season.

A catalyst for the 2017 champions at Stanford, Carusa was just as effective after transferring to Georgetown for last fall, leading the Hoyas to the College Cup. Time-and-time again she showed the ability to score big goals in big games for both programs. How her skill set fits to NWSL remains to be seen, whether she can play as an attacking midfielder, out wide or perhaps even deeper in more of a box-to-box role.

Smart and cerebral with the ball, McCoy is an excellent all-around soccer player that’s served as the focal point of the Duke attack during her time in Durham. The lack of high-end athleticism keeps her out of the Top 10 in terms of her draft potential, but for a team looking to accommodate a smart player that can pick a pass and find the back of the net, she’s a savvy pickup.

Finishing your college career as a national champion is nothing to complain about, and that’s what Tillman managed with the Seminoles last fall. A shifty attacking player that can run at defenders with the ball, Tillman’s also a smart player that makes good decisions, whether to pass quickly or look to dribble her way out of tight spots. While she played out wide at Florida State, she could play either on the wing or centrally at the next level, adding versatility to her resume.

One of the most intriguing players in the senior class, Sanchez is a Mexican national team standout that made her way from a small town in Idaho to one of the top attacking talents in the college game. A veteran of the 2015 World Cup with Mexico and the Under-20 event in 2016, Sanchez creates danger from wide areas with her one-on-one dribbling ability. Whether she’s good enough coming inside to combine with teammates or tracking back determines what kind of a chance she will get in NWSL. There’s every chance that she looks to head abroad as well, either in Europe or possibly in Mexico.

The New Jersey native thrived after making the cross-country move to Palo Alto, coming close to the century mark of college appearances while back-stopping a tremendous defense. Her physical ability and athleticism should set her up for success, and if she can adjust to the speed of play and improve while on the ball under pressure, Cook could be a hugely impactful player in the league. A move overseas can't be ruled out either, as Cook has a British father and could pursue options abroad. Also yet to officially enter the draft pool.

The left-footed center back’s been a consistent presence for the Tigers during her four-year career, and her involvement with the U.S. youth national teams is sure to have her knocking on the door for the first round. Her set piece delivery helped her pile up impressive stats for a center back. Listed at 5-foot-7, she may have to move to left back in order to succeed in the NWSL, though she’s certainly a determined and competitive enough player to earn a look centrally.