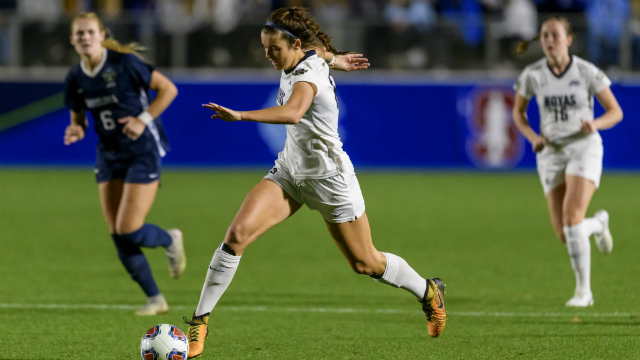 The 2019 NWSL Draft is slated for this week, with pro hopefuls eager to have their name called on Thursday, January 10 in Chicago.

Below is a look at prospects ranked from 21-30 for this year's edition of the draft.

A goal-dangerous talent that secured the Big Ten Forward of the Year in 2018, Bockin’s capable of creating trouble with her ability to find dangerous spots and finish chances off the dribble. If she can figure out a way to replicate what that success against higher-quality, more athletic defenders, then she could surprise on draft day.

Brandon’s playing time tailed off during her senior season, as she lost a spot in the starting lineup and logged under 1,000 minutes for the Hoos. She’s still a quality soccer player and talented with the ball at her feet. If she can adjust to the league’s physical demands, Brandon could be a third or fourth-round sleeper. Her name wasn't included in the latest draft-eligible list.

The left-sided defender from England’s a quality soccer player that moved from South Alabama to Arizona State after her sophomore season. A move back home to the FAWSL is the more likely outcome here, but she has a good motor, can defend in one-v-one situations and serves in a good cross.

A former Canadian youth international, Levassuer’s a talented and effective attacking player that could be squeezed out of an NWSL shot due to her citizenship status. She can score goals and create them with her passing and decision-making in the final third, and she gets herself into dangerous positions with her movement off the ball.

A tough and combative central midfielder, Viggiano plays above her 5-foot-4 sides, connecting play from the back line to her forwards from central areas. The box-to-box midfielder’s shown that she can be both disrupter and creator in the Big Ten, and if she can make the former translate in particular, it bodes well for her pro chances.

After spending her first two seasons at Wake Forest as a part-time starter, Feist started every game she appeared in 2017-18 campaigns. Her play in the final third was a big reason why the Demon Deacons returned to the NCAA tournament. She saved some of her best play for senior year and can play-make from the No. 9 spot or potentially fit in out wide in a 4-2-3-1/4-3-3. A smart player that can deliver a final pass, the lack of midfield support suppressed her numbers slightly as a senior, though she's a talent that could certainly surprise.

A defender with a good engine that’s likely to find a home as a right back, Harbison’s been a solid defender at the college level. Sharpening up her ability to contribute going forward will play a big part in her success if she gets a chance in the NWSL. There are tools here for a good pro defender if she's willing to stick it out and finds a team that provides her with an opportunity.

A hard-working wide forward that broke out at Georgetown her senior season after three very good years, Farrell’s been part of the latest draft-eligible list and could be a nice pickup for a team looking for attacking depth. She has a good engine and the pace to trouble NWSL defenders, gets herself into dangerous spots and can finish with either foot. How she fits into the next level could boil down to team fit, though there’s a lot to like about her ability.

An exciting talent from the Big East, Monaghan was hampered by a position change and injuries during her senior season. A lack of efficiency in front of goal probably means her future is either as an outside back or wide attacker rather than as an out-and-out striker. Her versatility could push her even higher up teams' draft boards.

After sitting out the 2017 season due to a knee injury, Baucom earned all-Pac-12 Second Team honors in her lone season with the Buffaloes. The target striker put together an impressive four-year career when all was said and done, scoring at least 10 goals in three of her four seasons in college and has the kind of ability in the final third to at least make an NWSL roster somewhere around the league.