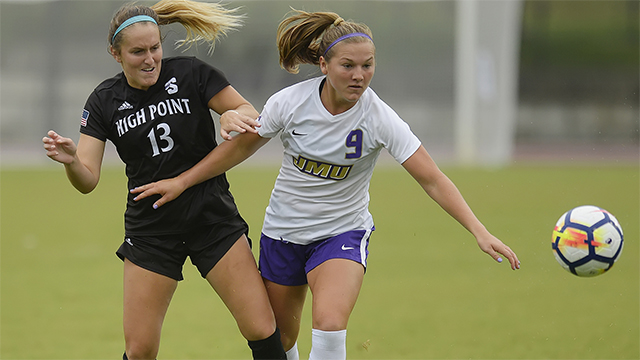 What happened in 2018: After a slow start under new head coach Josh Walters, James Madison burst to life in the regular season, winning the conference crown. However, Hofstra’s experience and quality paid off at the right time, as they beat JMU in the CAA tournament final to clinch a spot in the NCAA tournament. Northeastern finished in second place in the regular season, with the College of Charleston checking into fourth place.

What to expect in 2019: It should be another close race for the upcoming season, whether it’s the experience and grit of Hofstra, James Madison’s quick improvement or Northeastern showing signs of a bounce back in 2018. There should be a relatively exciting race for the top spots in the conference.

What to expect in 2019: Entering as the favorites in 2019, North Texas lost a couple of pieces but bring back defender Dominique James, who could be one of the top senior defenders. There’s a new coach at Rice, as Brian Lee shifted from LSU to the Conference USA program, who have some interesting players. There’s talent at other programs that will look to haul in the Mean Green, whether it’s Middle Tennessee, Charlotte, Florida Atlantic, UAB, Western Kentucky or Old Dominion.

What happened in 2018: Wisconsin-Milwaukee ran the table during the conference regular season, posting a 9-0 record and a 16-2-1 mark overall. Coming in behind them were Cleveland State, Northern Kentucky and Wright State. Milwaukee made sure that they wouldn’t miss out on the NCAA tournament bid, and their success carried them to the conference tourney crown.

What to expect in 2019: There are new coaches at Wisconsin-Green Bay (Jason Spain), Detroit-Mercy (Steve Shelton) and at UIC (Tom Anagnost). The chase for the conference crown has the potential to be wide open, considering the caliber of players that graduated; all four individual award winners were seniors a year ago. It would be surprising to look outside Wisconsin-Milwaukee as the favorite, although the contenders from 2018 will like their chances of making quick inroads in the upcoming season. Anagnost and the work he can do at UIC is another storyline to watch after he helped lead Mississippi State to the NCAA tournament last season.

What happened in 2018: The margins were razor-thin in the Ivy League once again, with Princeton and Penn finishing tied on 16 points last fall with identical 5-1-1 records. Dartmouth and Harvard were three points off the pace with Columbia finishing on 12. The Tigers won the automatic bid to the tournament, losing 3-0 to Texas Tech.

What to expect in 2019: Another close race could be in the cards, although defending co-champions Princeton have all the tools – minus the goal-scoring threat of Mimi Asom – to finish the season on top. Penn’s success last year can be attributed to an air-tight defense and some timely scoring, a feat that can be hard to replicate. Goalkeeper Kitty Qu returns to lead that effort, and they’ll look to beat back the Big Green, keep Columbia at bay and hold off Harvard. The Crimson bring in the first of what should be back-to-back strong recruiting classes, giving them a chance at shooting back up the standings.

What happened in 2018: Monmouth’s recent dominance showed no signs of letting up, winning nine out of 10 regular season league games before cruising to the conference tournament crown.

What to expect in 2019: Can anyone slow down the Hawks? At this point, predicting that kind of drop off seems too risky to take. Madie Gibson is back after sharing Co-Offensive Player of the Year honors, and a number of decorated standouts return. Marist finished five points off the pace and can hope to haul in the Hawks, while Siena College, Niagara and Rider finished over .500 with an overall record and in conference play. It’s going to take the combination of a Monmouth slip and a massive surge from a program in order to see another team take top honors.

What happened in 2018: The rise of Bowling Green continued last fall under head coach Matt Fannon, who recently signed a contract extension through 2022. They posted a 10-1 record in MAC play, winning the regular season title. In the conference tournament, they backed it up to secure the automatic bid.

What to expect in 2019: While Bowling Green has to fill some key spots of the field, including Erica Hubert, they bring plenty of quality back in crucial areas in the spine. Ball State’s an interesting side that finished in second place, five points being BGSU. Rising sophomore Tatiana Mason pulls the strings in the heart of the midfield.

What happened in 2018: A strong season for Loyola-Chicago saw them claim the regular season title with a 6-1 record in MVC play. The team’s strong goal differential (20 goals for, six against) played a huge part. Drake checked in at second place, scoring just nine goals but conceding four to finish with a 5-1-1 record. Illinois State and Northern Iowa rounded out the top four. The top two teams from the regular season ended up in the conference tournament final, with Loyola-Chicago edging Drake by a 3-2 score to win the league’s automatic bid.

What to expect in 2019: Another close conference race should be on the cards, as programs cope with the talent drain. Jenna Szczesny is the big name out the door from Loyola-Chicago, although a total of five seniors comprised the MVC First Team. It wouldn’t be surprising to see Drake, which returns important contributors like Cassie Rohan and Kelsie Stone, have enough to snag the regular season title this time around.

What happened in 2018: Three programs secured the regular season spoils, as Boise State, Wyoming and New Mexico each finished with an identical record of 7-2-2. None of those three would end up in the NCAA tournament however; San Jose State earned that distinction, beating Boise State on penalty kicks in the semifinal, and then beat New Mexico 1-0 in the final.

What to expect in 2019: Another close regular season race should be on the cards, as several of last fall’s top programs bring back significant talent. Raimee Sherle leads that back after she enjoyed a stellar season at Boise State. Her firepower and game-changing speed makes her side among the favorites, especially with a couple of complimentary pieces also returning. Wyoming needs to find a new defensive leader after the graduation of the Mountain West Defensive Player of the Year Taylor Burton. San Diego State always is there or thereabouts in the race and will look to get back into the mix in the upcoming season, and San Jose State’s defensive leader Kristen Amerikwa gets one more shot at a Mountain West crown. Three All-Conference performers highlight New Mexico’s returning group, which can take confidence from last year’s success despite coming up short in the final.

What happened in 2018: After a perfect campaign in the regular season (8-0 record), Central Connecticut secured the league’s automatic bid. The NEC side lost to eventual national semifinalists Georgetown in the first round. Saint Francis (PA)(w) ran CCSU close, but were eight points off the pace at season’s end. Mount St. Mary’s(w) and Fairleigh Dickinson checked into the top four places, with the latter equal on points with Bryant.

What to expect in 2019: There are two new teams joining the conference, as St. Francis Brooklyn is now sponsored in women’s Division I soccer. Merrimack has moved up  Justine Lombardi has been tabbed as the program’s first-ever coach. It’s unlikely for a brand-new program to compete for honors, especially with Central Connecticut coming off such a strong season. If there are any issue for last year’s double-winners, Saint Francis (PA)(w) is going to push for the summit. That could be unlikely with Shauny Alterisio back to lead the team in defense. But there could be others looking to push. Bryant brings back some All Conference performers to lead the while, while Mount St. Mary's could also end up pushing for the summit.