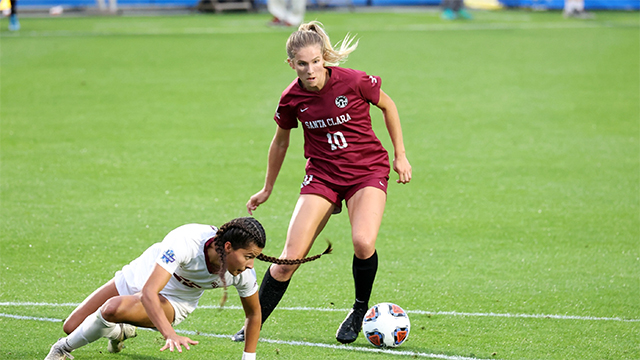 After a most unusual women’s college season, last week saw the 2020-21 season come to a close with Santa Clara emerging as champions.

The WCC side dominate this year’s TopDrawerSoccer.com awards, released this week hailing the top achievers in the 2020-21 campaign.

Santa Clara forward Kelsey Turnbow nabbed the Player of the Year award, leading the Broncos to the national championship. The senior star, who is returning to play one more season in the fall, was part of her side’s electric attacking front line that fired their way to the national championship. She scored 10 goals in 12 games, including huge tallies in the College Cup against North Carolina and Florida State. The Arizona native chipped in four assists as well. Turnbow edged a talented field that included Brianna Pinto (North Carolina), Mikayla Colohan (BYU), Jaelin Howell (Florida State, to name just a few final contenders.

Turnbow’s head coach Jerry Smith earned the Coach of the Year nod, guiding his side to a 10-1-1 record. Like most teams, the Broncos dealt with COVID-19 issues in the spring season, with a handful of games cancelled on the way to winning the WCC title. Smith and his staff had the Broncos playing enterprising, attacking soccer with Turnbow, Izzy D’Aquila and Julie Doyle providing dynamism and entertainment in the spring campaign. Perhaps most impressively, Santa Clara saw off three straight ACC opponents to earn a first championship since 2001, beating Clemson, North Carolina and Florida State in the final three games of the tournament.

In order to be eligible for the awards, players had to be rostered at the end of the season, leaving out several impressive performers from the fall that had elected to turn pro between the fall and spring campaigns.