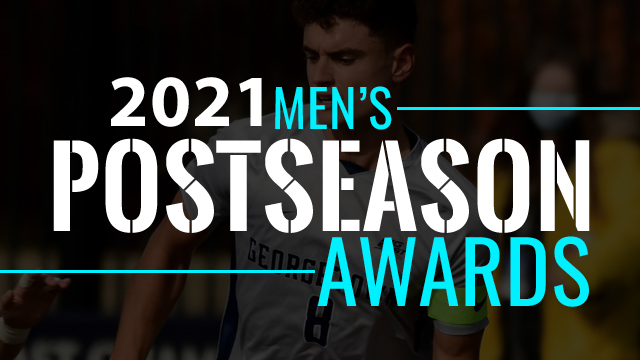 The 2021 men’s Division I college season is done and dusted, as Clemson finishes the year on top of the heap.

As is tradition, TopDrawerSoccer hands out postseason awards for the recently completed season, recognizing some of the top players in the DI men’s game. Taking into consideration the full season (including postseason), the awards are based on collective accolades throughout the game, team results and individual observations.

Earning the TDS Player of the Year is Georgetown star Dante Polvara. Combining with Sean Zawadzki in the central midfield, Polvara was a big reason for Georgetown’s dominant season, despite losing in the College Cup to Washington. While his record from the penalty spot could’ve been better (he scored four of seven attempts on the year), Polvara finished the season with 7 goals and 6 assists. Three of those came in the tournament – including two from the penalty spot – but his award is more about all-around excellence.

One program that enjoyed a stellar season, Tulsa was backstopped by Freshman of the Year Alex Lopez in goal. It was an impressive campaign from the Hurricanes, sweeping the American Athletic regular season and conference tournament. Lopez earned the Goalkeeper and Rookie of the Year in the conference, playing nearly every minute between the posts. The Spanish shot-stopper made 43 saves as the team had nine shutouts this season. He edged out a talented field that included Isaiah Parker (Saint Louis), Shakur Mohammed (Duke) and Joshua Bolma (Maryland) among others.

After guiding his team to the national championship, Mike Noonan is the 2021 Coach of the Year. Noonan took a team, while perhaps not quite as individually talented as past editions, all the way to the title. Finishing the season with a 16-5-2 record, Noonan finished ahead of Georgetown’s Brian Wiese and Washington’s Jamie Clark in consideration.