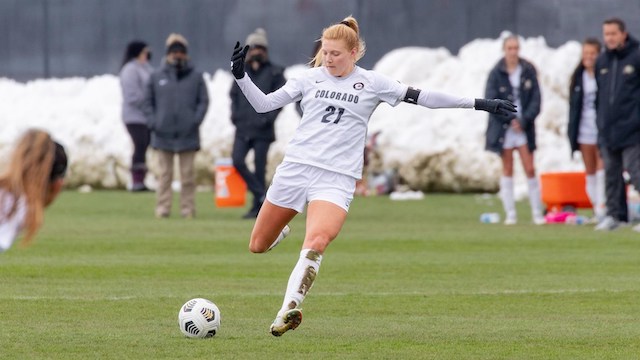 With three new head coaches in 2021, the Pac-12 is going through a quick overhaul during this campaign. The UCLA Bruins enter as the preseason favorites despite quite a bit of roster turnover from last year. USC should be a worthy contender for the conference champion. Stanford is an obvious candidate for a bounce-back campaign.

Check out a rundown of all of the Pac-12 programs prior to the start of the 2021 college season.

There is a lot to love about this UCLA Bruins team (and they were easily the most entertaining to watch during the 2020/2021 season). However, let’s start with the negatives first. Lucy Parker is gone. That is a giant hole in the roster. Parker, for my money, was the most valuable player in college soccer last season, from her defending to leadership to passing. She was a five-star player for the Bruins while healthy. There was a noticeable drop-off for the Bruins when she was injured. She is not the only piece that Amanda Cromwell and her staff need to replace. Karina Rodriguez and Delanie Sheehan are also gone, as well as Jacey Pederson and Viviana Villacorta. This is UCLA though. Four-star players beg to walk-on just to play for Cromwell. There are plenty of worthy candidates to step into those minutes during the 2021 campaign. It will be tough to replace that production. For UCLA to be successful in repeating as Pac-12 champion, Mia Fishel needs to take a step forward in her development. There were a number of games during last campaign when she looked like the most dominant force in the college game, but she struggled in front of goal. It was a case of a million dollar move with a nickel finish. She ended the season with six goals in 16 games. As someone who watched plenty of UCLA games, Fishel should’ve hit double digits easily. Knowing Fishel’s reputation for training in the offseason, she spent plenty of time working on scoring while having three defenders on her back during the offseason. Fishel is a smart pick to lead Division I in goals scored - I know Reilyn Turner is going to steal some of her chances and Marley Canales takes the penalty kicks, but Fishel is the point of the attack and until I see a center back in college soccer that can stop her, I’m betting on Mia.

I like that the United Soccer Coaches’ poll put USC at No. 14 in the preseason poll. That should put enough of a chip on their shoulder during the warm-up to the season to make sure the squad is ready for a daunting out-of-conference schedule. Road games against BYU, Utah Valley, Michigan, and Western Michigan will get this group ready for the Pac-12 gauntlet. Individually, there is a lot to love about this USC roster. Croix Bethune is an obvious next-level talent. She is two years removed from an ACL injury, and my preseason pick for midfielder of the year in the conference. Penelope Hocking led the team in scoring last season with 10 goals. USC’s issue last season was not the attack. It was playing the full game. UCLA stole two draws off of them with an equalizer in the final five minutes of both games. USC should’ve won both of those games. Ole Miss pulled off the ultimate comeback smash and grab in the NCAA Tournament to steal that second round game. It was one-way traffic in the first half. Ole Miss managed two shots in the opening 45 with 0 on goal. USC only managed a pair of goals, and the foot slipped slightly off the gas. The rest is history with Ole Miss making the big comeback in the second half. History does not tell the future, but it should help the USC coaches figure out what to change to get this program back to the College Cup in 2021. There is too much talent on the roster to aim lower than a deep NCAA Tournament run this season. Savannah DeMelo, Hocking, and Bethune should have the offense clicking. Newcomers Simone Jackson and Kayla Colbert are good enough to step into the starting lineup for any team in the country. Colbert is listed as a forward on the roster, which is intriguing. She projected as an outside back at the club level.

Turns out Nicole Van Dyke is an excellent coach, which is not great news for the rest of the Pac-12. Washington is in for a challenge to start the campaign with road games against North Carolina and Duke in the first two contests. The good news for the Huskies is that key contributors Ameera Hussen and Summer Yates (!!) are back. Yates (!!!) had four goals and four assists last season. Hussen had five goals. My money is on Yates to lead the team in scoring again this season - but expect her to get back to near double digits in both goals and assists. She has that kind of talent. Olivia Van Der Jagt was an unheralded standout for Washington last season. She is back for her redshirt senior season. The Huskies will need to replace Kaylene Pang who played every minute last season.

Stanford sitting in fourth place in the Pac-12 feels wrong. Last season was the first time Paul Ratcliffe’s Stanford side missed the postseason. First time in 18 seasons Stanford was not competing in the tournament. The expectation is that will change in 2021, and Stanford will be back in the mix for the hardware. However, there are some questions with this Cardinal roster. Replacing Catarina Macario’s production was not accomplished during the 2020 campaign, and there is not an obvious candidate to try to fill that role on the 2021 roster. Ratcliffe will make it work, and a full preseason should help get this team in a better place than last year. Still, the defense will be the strength of this year’s Stanford team.

Hannah Sharts is the perfect player for the Colorado style of play. She does enough of everything to keep the team competitive against anyone. Dani Hansen had a great season in goal in 2020. Both will need to play at an All-Pac-12 level again in 2021 to keep Colorado among the top half of the standings. Early out-of-conference games against Florida State and TCU will test this group.

Nicole Douglas is back for her senior campaign and looking to continue to climb the record books with the Sun Devils. Douglas scored eight goals in 17 games last season. She led the team in points and goals. Alexia Delgado and Lieske Carleer were also all-Pac-12 honorees last season. With all three back, Arizona State has some justifiably high expectations for the season.

Oregon finished with a winning record in Graeme Abel’s first season in charge in Eugene. The 2-1 win over Stanford in his first Pac-12 game was quite a memorable opening statement. Oregon returns all-conference honorees Leah Freeman, Croix Soto, and Zoe Hasenauer.

At 36 years of age, Becca Moros is one of the youngest coach in the conference. She is also one of three new coaches this season. Moros will have a tough task in one of the most difficult conferences in college soccer. To make matters worse for Moros, all-Pac-12 honoree Jada Talley transferred to USC during the off-season. It’s not all gloom in Arizona. Jill Aguilera, the team’s leading scorer last season and all-Pac-12 honoree, is back for a redshirt senior season. Aguilera scored nine goals in 14 games last season.

I’m still not ready to forgive Washington State after parking the bus against USC last season. It felt like the swagger and bravado from the 2019 squad was gone when the staff decided to play everyone behind the ball. The Cougs need the locker room change to bring back that us vs. the world attitude from that dream season. Sydney Studer is a key addition from the transfer market.

Hey! Another program with a new head coach in 2021. Hideki Nakada takes over a team that only won four games last season. It will take some time to reinvent the roster to fit his style of play, but his experience with Stanford suggests he will find a lot of success at this level.

If history is any indication, California usually bounces back with a winning season after a losing season, which means this should be a good year for the Bears. Emily Smith is back for her extra season of eligibility, while Angelina Anderson can lead the bounceback in goal.

Lauren Sinacola is another new coach to the Pac-12 this season, and also one of the youngest coaches in the league. She has previous experience with Western Michigan and Notre Dame. The Oregon State squad has some competitors looking to climb out of the bottom of the standings in the league, they could fill the spoiler role this season.