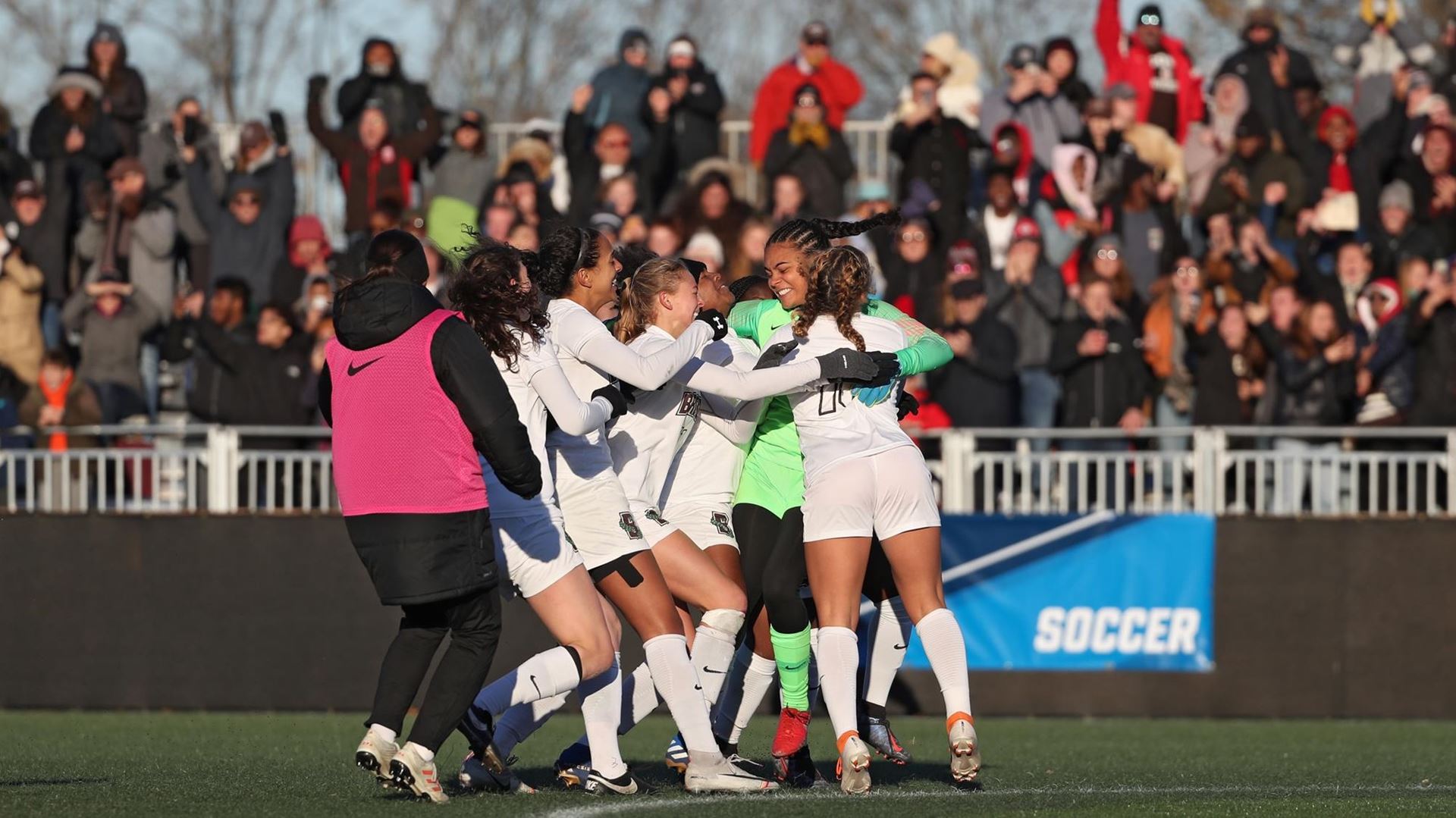 The new women's Division I season starts next week. Here's a brief rundown of what to expect to see in the upcoming season.

What happened in 2020-21: North Florida secured the regular season title in the shortened spring campaign with a perfect 6-0 record (some games were canceled due to COVID-19). Kennesaw State, Lipscomb and FGCU weren’t far behind. It was Liberty, however, that secured the at-large bid with a dream run in the conference tournament.

What to expect in 2021: A close race should be on the cards. Thias Reiss and Ari Munoz are among the key returnees for North Florida, who should be in with a shout to win the regular season. Preseason polling has Lipscomb close, while FGCU’s recent success can’t be overlooked. One of the biggest questions will be if Liberty can carryover momentum from the 2021 spring campaign into the fall.

What happened in 2020-21: The conference played a very small spring schedule with two divisions. Massachusetts-Lowell topped one table, while Stony Brook tied with Binghamton in the other. Stony Brook won a second straight conference tournament title, progressing to the championship game.

What to expect in 2021: Preseason expectations among the coaches in the America East tip Stony Brook to return to the summit again. Plenty of talent returns, including Jasmine Colbert, the Striker of the Year at Albany, Defender of the Year Dunja Mostarac (Massachusetts-Lowell) and Alyssa Francese, one of the top players for Stony Brook. Binghamton, Albany and Massachusetts-Lowell are among the programs to watch if Stony Brook slips off the summit.

What happened in 2020-21: The conference split off to North, West and East divisions in order to limit travel during the spring season. It was a similar story in the end however: Saint Louis finished with a perfect record in the West Division and won the four-team conference tournament. SLU earned the No. 15 seed in the tournament as well.

What to expect in 2021: Three straight Atlantic 10 tournament titles for Saint Louis, they’ll enter as firm favorites for another this season. All three of the players honored by the conference for postseason awards are back: Hannah Friedrich, Abbie Miller and Emily Puricelli. The spring’s schedule makes it hard to read who could emerge and push the Billikens aside. Massachusetts had a good run, along with La Salle and Fordham in the north; Davidson made it to the conference title game in the spring season. VCU, George Washington have decent talent, while George Mason could make waves with a new head coach. Dayton could have the best shot at making a run, though it’s SLU’s world at the moment.

What happened in 2020-21: One of the few conferences to play in the fall, TCU had a dream season. They won the regular season and made it to the tournament. They were joined there by Oklahoma State and West Virginia. The Horned Frogs played the longest, losing the quarterfinals to Virginia.

What to expect in 2021: Another wide open race is on the cards. West Virginia has a strong core returning, though top scorer Stefany Ferrer-Ginkel is gone. Yazmeen Ryan turned pro with the Portland Thorns, giving TCU a big hole to fill. But there should be improvement elsewhere. Texas Tech had an atypical down year. Texas has the No. 3 recruiting class to go with returning players like Julia Grosso. Defender Kim Rodriguez is back for Oklahoma State and will be a fixture. Kansas and Baylor should be improved, along with Iowa State, Oklahoma and Kansas State.

What happened in 2020-21: It was another great season for Georgetown, which was able to win the East portion of the bracket. Butler topped the table in the West, as the conference split in two in order to get through the spring season. The Hoyas returned to the NCAA Tournament, beating Butler in the conference tournament.

What to expect in 2021: Georgetown should lead the charge again, with a full conference schedule returning. The Hoyas have retooled in impressive once again, bringing in All Ivy League performer Sydney Cummings to anchor the defense. Butler appears most likely to challenge the Hoyas, though Marquette showed strong improvement in the spring, as did Big East returnees Connecticut.

What to expect in 2021: Madison Montgomery is one of the key returning players at Northern Arizona, which should be in the frame with a return to single table competition. How that impacted the spring season will certainly play out as the season progresses and each program faces each other once. Montana has holes to fill, though defender Taylor Hansen is back for another season. Eastern Washington has a new head coach, bringing on board former Air Force assistant Missy Strasburg. Her fit and ability to bring the former champions back to the summit could shake up the season. Idaho, Northern Colorado and Weber State have the rosters to make a push as well.

What happened in 2020-21: It was nearly a dream season for High Point, which put together an unbeaten run in the regular season, coming up short in a wild 4-3 loss against Campbell in the Big South tournament final. The Camels were edged in the first round of the tournament at home against Iowa.

What to expect in 2021: The Panthers have now won back-to-back regular season titles, and bring back all 11 starters from the spring. Campbell was voted second in preseason polling and can make a case for making life difficult for High Point. Raford(w), Longwood are two of the other programs to watch, while Hampton University joins the Big South for women’s soccer.

What happened in 2020-21: The California-based conference canceled competitive games over the past school year. Most programs did play a typical spring schedule against each other.

What to expect in 2021: Without a competition to break down, there’s a lot of uncertainty facing the upcoming season. CSU Bakersfield and UC San Diego are officially part of the conference, which obviously adds two other teams. Dating back to the 2019 season, Cal State Fullerton won both the regular season and conference tournament. Haley Brown is one of the few holdovers from that year, and between the pandemic and a lost season, every program will have eyes on vying for first place. It should be a wide open race as well, with Hawaii, UC Santa Barbara, Long Beach State and CSUN looking to jostle among the contending programs.

What happened in 2020-21: Elon knocked the reigning CAA tournament champions Hofstra off the top, defeating the Pride in the final to earn an at-large bid. Programs played small schedules in the spring, with Hofstra boasting a dangerous attack before coming up short.

What to expect in 2021: Hofstra brings back several of its key pieces, including Lucy Porter for a fifth year. Sabrina Bryan elected not to play another season, though there should be enough in the Pride attack to put together a strong campaign. Elon’s defensive resolve was impressive, as four straight shutouts laid the foundation for the scintillating finish. Northeastern, UNC Wilmington and James Madison are a few other programs to watch when the season gets going.

What happened in 2020-21: Another league that was split into two divisions, Rice won the west and Western Kentucky triumphed out east. The Owls enjoyed a stellar season overall, winning the conference tournament and making it to the third round of the NCAA Tournament.

What to expect in 2021: Assuming that normal scheduling is restored, the 14-program league will return to single table. Teams play eight conference opponents, so the schedule makers (which do lean on regional matchups) factor into how the season should play out. Rice should be among the contenders once again, continuing to enjoy success under head coach Brian Lee. Western Kentucky, Florida Atlantic, North Texas and Charlotte are other programs that should factor into the race for the top four seeds in the conference tournament.

What happened in 2020-21: It was an extremely tight race in the spring season, with Northern Kentucky edging Wisconsin-Milwaukee for the regular season crown. The latter enjoyed success in the conference tournament, winning 4-3 in a penalty shootout after a 0-0 draw. UIC and IUPUI also finished in the top four, an exceptionally close race.

What to expect in 2021: Wisconsin-Milwaukee has now won three straight conference tournament titles and should firmly be in the mix for both the regular season and postseason honors. Northern Kentucky has to fill the void of Kailey Ivins, who was the Offensive Player of the Year in the spring. Mimi Stines is back between the posts, which is something to build on. Outside of the top two, keep an eye on Cleveland State, UIC, IUPUI and Oakland as they jostle for the top.

What happened in 2020-21: No Ivy League programs played competitive games.

What to expect in 2021: Almost every single team in the Ivy League could stake a claim at winning the crown. Brown won it back in 2019, and brought in another top level class for both 2020 and 2021. However, the likes of Princeton, Harvard and Columbia will like their chances of making a push for first place. Penn’s head coach Casey Brown will finally get a first shot at competitive games after being hired at the start of 2020. Harvard also made a splash with 2020 and 2021 additions; if they can hit the ground running then it could bode extremely well. Dartmouth, Cornell and Yale will look to rock the boat and make some noise in the upcoming season.

What happened in 2020-21: It was an extremely short season in the MAAC, with most teams getting in just five or six games for the regular season. That bumped Monmouth off the regular season perch, with Siena College coming through as double-winners, defeating the Hawks in the conference tournament final.

What to expect in 2021: Despite having their tournament streak snapped, Monmouth still had ample talent, as evidenced by four postseason All-MAAC awards. Getting back into first is sure to be a driving factor for the New Jersey program. Siena College is obviously going to be out to prove that the spring season was no fluke either, and will rely on returning defensive stalwarts Brianna Montinard and Leslie Adams. But this shouldn’t be a two-team race either. Quinnipiac enjoyed a strong 4-1-1 spring season, and if that carries over into a large sample, should line them up to be contenders. Manhattan, Rider, Niagara and Fairfield have the requisite talent to make some noise.