Ramey Kerns led the nation in goals per game, points per game, and tied for the most goals. Not bad for a junior, but there won’t be a senior campaign for the ETSU star. Kerns has already graduated, and left a pretty big hole in the Atlantic Sun. 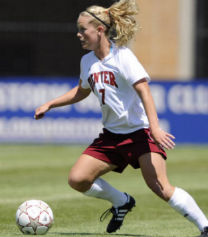 ETSU has to replace the production of the A-Sun Player of the Year – and also step up the chase to unseat FGCU. Austrian youth international Sarah Zadrazil showed she could compete at the collegiate level last year with four goals and 10 assists. The Bucs may lean on her even more in 2013.

ETSU and everyone else in the Atlantic Sun are playing catch up to FGCU. The Eagles bring back All-Atlantic Sun First Team member Ally Kasun, who was voted as preseason Player of the Year in the conference, as well as leading scorer Shannen Wacker. Kasun had seven goals and seven assists last season. But head coach Jim Blackenship will need to replace Atlantic Sun Defensive Player of the Year Ashley Ciesielcyk.

Jacksonville was picked to finish second in the conference by the coaches. Senior defender Ally Lee was highlighted as the Defensive Player of the Year in the same preseason tally. Although she was the lone representative from the Dolphins to make the First Team All-Atlantic Sun list, there is some pressure on the squad to produce this fall.

ETSU and Mercer split honors for the third place spot in the preseason vote. Mercer returns rising talent Lauren Gassie, who had a goal and an assist in the Bears preseason opener. Gassie was a preseason first team honoree.

The 2012 All-Big West First Team consisted of nine seniors, one sophomore, and a freshman. Long story short, there are a lot of quality players gone from this conference that had lasting legacies at a number of schools.

The exodus does open the door for some new tales to be told, as returners Elise Krieghoff (Cal Poly) and Natalia Ledezma (UC Irvine) look to be the future of the conference.

Krieghoff led the league in goals scored last season with 11, which helped Cal Poly bust out of a slump of sub .500 records in conference play over the previous two seasons. The Mustangs also return goalkeeper Alyssa Giannetti, who smothered a ridiculous 118 saves in 2012.

The Anteaters also figure to challenge for the title in the Big West. Scott Juniper’s side brings back three solid contributors in Haley O’Brien, Corey Tobin, and Ledezma. The latter has made the transition to defense, according to preseason game reports, which should offer a dynamic option for Irvine’s attack as it builds from the back. Transfer Bianca Frontino is one to watch as well. Frontino is a two-time Junior College All-American.

Cal State Northridge also figures to be a major challenger in the Big West. The Matadors return Big West Defender of the Year Chloe McDaniel for her final collegiate season.

Long Beach State is another program to keep an eye on in the Big West. Beach tries to push its NCAA Tournament appearance streak to four straight trips this fall. The Beach returns five starters, but has to replace some key players that graduated.

Last year was a dream season for the Aztecs. They stormed through pretty much every team that stood in the way to a 21-2-1 record. Duplicating that type of success might be difficult as the Aztecs lost the Mountain West Offensive Player of the Year Megan Jurado.

Chasing the Aztecs in the conference are a few programs that continue to build toward postseason success. UNLV finished fourth in the conference last season, and look to have the pieces to finish even higher this fall. Susie Bernal is a player to watch for the Rebels. The sophomore had a breakout campaign last fall as a freshman, and could be the key to pushing this squad into a deep postseason run.

Boise State, the third-place finisher in the conference last season, return freshman sensation Brooke Heidemann, who appeared in all 20 of the Broncos game last year in the midfield. Among the incomers, Kelli Drobney may be the most ready to contribute. The former Colorado Rush player fills a need at forward for the Broncos, and she has already shown during her prep career that she can play at a high level.

New Mexico had to replace goalkeeper Kelli Cornell during the offseason. Cassie Ulrich was already on the books, but the coaching staff brought in three others to challenge for the spot (and attempt to fill some mighty big shoes that Cornell left). Head coach Kit Vela also recruited nine other players to fill out the roster for this fall. The Lobos will need some depth with a very challenging schedule that includes road games against North Carolina and Duke.

Jeff Hooker and the Denver Pioneers program commands respect wherever it goes. The fellow coaches of the Summit league picked Denver to win the conference in its first season as a member. The Pioneers claimed all seven first place votes available.

There is a simple reason why Denver is expected to top the table in its new conference: Kristen Hamilton. The striker from Littleton had 14 goals and seven assists last season as a junior. In her final collegiate campaign, she will be difficult to stop. Boosting the attack of the Pioneers alongside Hamilton is Nicholette DiGiacomo, who had seven goals and nine assists last season from the midfield. Both seniors have loftier goals than a Summit League title.

With the exit of Oakland in the offseason, Fort Wayne is the assumed favorite among the returning programs. The Mastodons advanced to the Summit League Tournament championship for the first time in program history last season. The Dons return a good sophomore core in Rachel Good, Erin Gill, and goalkeeper Sam Pavlika.

Western Illinois was selected to finish third in the league by the coaches in the preseason poll. The Leathernecks return Laura Atkinson and Amber Davis, two All-League players from last season.

Will anyone have enough to stop the Denver Pioneers though?

*Record in the WAC