There is a gap between the haves and the have-nots in the Big West. Over the past few years, Long Beach State and UC Irvine have emerged from the pack and distanced themselves from the rest.

Last year, the 49ers and the Anteaters had impressive RPI, the standard for rankings in terms of the NCAA postseason, ranks of 19 and 26 respectively. Both squads made the NCAA tournament and showed well for the conference.

Now, it is on the other eight teams in the conference to close the gap and gain more respect for the conference overall. Cal State Fullerton could be poised to help close that gap with a vast section of last year’s roster back this fall. Cal State Northridge is also fit for the bill with a very challenging non-conference schedule in 2012.

This fall also marks the return of Hawaii to the Big West Conference. The new lengthy travel to the island state could throw a wrench into the proceedings for Big West programs. 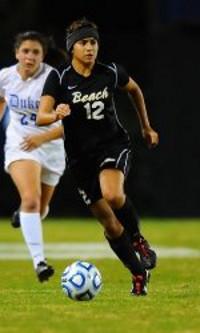 Natalia Ledezma transferred from UCLA to UC Irvine in 2011. She then took the league by storm with 12 goals and eight assists in her debut season in the Big West. At times, Ledezma’s combination of speed and skill made her unstoppable for defenders.

The Anteaters were not a one-woman show though. Cami Privett recorded five goals and five assists on her way to collecting the Big West Freshman of the Year honor.

The Irvine season came to an end in the first round of the NCAA tournament with a penalty kick defeat to San Diego. The confidence gained from the strong season last year allowed the Anteaters to put together an aggressive schedule for this fall.

Home games against Texas A&M and Auburn highlight the non-conference outings. Ledezma and Privett will need to be sharp against two of the top teams in the nation in those August clashes.

Nadia Link was the standout for Long Beach State in 2011. The local product scored 16 goals and contributed 10 assists, as the Beach advanced to the Elite Eight of the NCAA Tournament (for the first time in program history) with wins over Pepperdine, Miami(w), and San Diego.

This fall will be a different Long Beach State group though. Four of the top five scorers graduated from last year’s squad. Also, goalkeeper Kaitlyn Gustaves, who played every minute last year, graduated.

Those are a lot of positions for head coach Mauricio Ingrassia to fill, but he has been able to keep Long Beach State successful with the past turnover so the same will be expected this season.

Ingrassia will need to make sure the ranks are in order early with Baylor and Texas A&M on the docket in the opening few weeks.

Head coach MaryClaire Robinson has been the face of the program for two decades. Over that time, she has jumped conferences and divisions. Last season was her first time collecting the Big West Coach of the Year honor.

Robinson led the Aggies to a double-digit win total and a third place finish in the conference. This season will be a big test for the experienced coach though. Eight players from last season’s squad have graduated, which leaves UC Davis with some holes to fill for the fall (most notably at goalkeeper).

Leading scorer (and local product) Allison Kelly is back for her senior season. Kelly has scored 13 goals over the past two seasons.

This fall has the potential to be a boom or bust season for the Matadors. Head coach Keith West put together a schedule that includes seven teams that played in the NCAA tournament in 2011.

Most notable are the road games against Santa Clara and Portland in mid-September, which will reveal the true makeup of this team.

In order to improve on the sub .500 record in 2012, the Matadors will need a more comprehensive attack. Last fall, Northridge only averaged a goal per game, which will not be enough against this year’s tricky schedule.

Head coach Demian Brown rebuilt the defense in the offseason with three goalkeepers, two defenders, and a midfielder added to the roster for 2012.

Offensively, Brown has his top three contributors, Ann Marie Tangorra, Nikki McCants, and Stacey Fox, back with the Titans this fall.

A fixture at Florida State on September 7 is the highlight of this season’s schedule for the Titans. Florida State finished last season with the fourth best RPI in the nation, and any result for the young Titans would be a major coup.

There is a new man in charge of UC Riverside . . . sort of. Nat Gonzalez, the assistant coach for the Riverside men’s team for four months, was named the interim head coach for the women’s team earlier this year.

Gonzalez takes over a program that sputtered to the finish line last year. Riverside lost three of its last five games and missed out on the conference postseason tournament.

The new man will have the return of supersub Andrea Morales (four goals) for her senior season. He will need to find some more players to step up around her to remain competitive in the Big West.

Sophomore Sara Lancaster was the breakout star for Cal Poly in 2011. The Nevada-native notched eight goals and one assist in 19 games to lead the Mustangs in goals and points.

Tigers fans have reason to be excited in 2012. Incoming transfer Mirella Mattos could be a real difference maker for the Stockton outfit. Mattos, formerly of the Brazil U17 Women’s National Team, scored 22 goals for Western Texas College last season.

The ladies of UCSB have not been able to duplicate the success of the men’s program yet. But there are signs of the program heading in the right direction.

With games against Illinois and Oregon State on the docket at Harder Stadium this season, the Gauchos will definitely be tested.

The new program to the Big West has already had a small taste of the league with games against UC Irvine and Long Beach State in 2011. The Warriors lost both of those meetings, but gained some valuable experience for what is to come this season.

Last year’s leading scorer Brittani Lum graduated, but there are a number of talented players on this season’s roster including a strong senior class with seven contributors.