Biggest snubs from the 2016 MLS SuperDraft 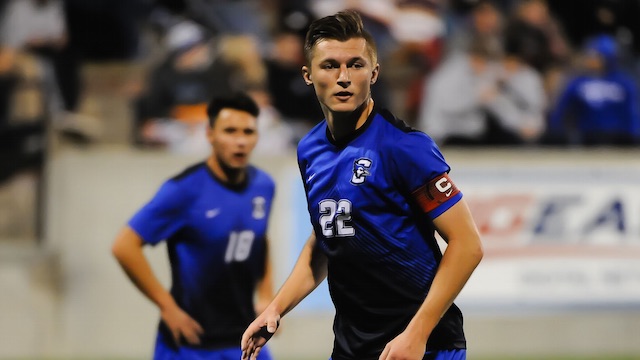 Two more players who were signed by MLS prior to a draft weren’t picked in Tuesday’s final two SuperDraft rounds.

It seems to happen on occasion that players the league deems fit for competition aren’t snapped up by teams during draft time, and two more fell into that category on Tuesday. Virginia’s Todd Wharton and Kentucky’s Callum Irving both went undrafted, forcing them into the awkward space of possessing a contract from MLS while not having a team.

Four teams combined to pass six times in the final 40 picks of the draft, further throwing up the question of how much utility it has, especially in the later rounds. It also makes you wonder how many players who were snubbed from the draft entirely deserve call-ins to the approaching preseason camps.

With that in mind, here’s a clutch of players who weren’t taken in any of the draft’s four rounds who deserve a professional look. Remember, the draft isn’t a sacrosanct list of all draft-eligible players, and there are no doubt a few snubbed names still out there looking to impress.

Here are a few of those names.

GK Callum Irving, Kentucky: You may recognize the next two names on this list, because they were featured on my “best of the rest” list compiling the top players left on the board for the final two rounds. Irving and Wharton were both seen by most as fringe first-round talent, and both fell entirely out of the draft. As far as Irving was concerned, that was made more shocking by who went ahead of him.

There were three keepers taken in the final two rounds: Colorado took Chris Froschauer (Ohio State) at No. 43, Portland snagged Wade Hamilton (Cal Poly) at No. 61, and RSL snapped up Connor Sparrow (Creighton), at No. 65. Irving was nowhere to be found. At this point Irving is probably the best post-college player without a team, and if he isn’t in an MLS camp come February, something’s broken in the ID system.

M Todd Wharton, Virginia: Wharton is hardly a unique talent in the sense that he doesn’t do anything that simply leaps off the page. He’s a steady presence in the defensive midfield, and if MLS is long on any skill set it is in the holding midfield. Still, Wharton’s size and coverage ability casts him as a steady fit for a number of MLS teams in need of depth at the position, and at the very least a lynchpin of a national title-winning team from 2014 deserves a look.

Instead, he watched as a number of players with lesser pedigrees came off the board first. The more shocking thing, though, wasn’t that players like Cole Missimo and Mitchell Taintor came off the board first, but that a handful of teams actually passed on picks in lieu of taking Wharton. There are a few defensive midfielders in MLS Wharton could most likely beat out for playing time, but instead he’ll be on the outside looking in until getting a camp invite. Don’t be surprised if its the Timbers, where he played U23 ball, who come calling.

F/M Norberto Ochoa, UC Riverside: If you’re looking for the top-ranked player on our Big Board who didn’t come off the table in any of the draft’s four rounds, he’s right here. Ochoa finished the season as our No. 31 draft-eligible player in college soccer, and it wasn’t a total shock that MLS didn’t have much of a read on him. He only played one full year of Division I soccer, and it was his explosive senior campaign with Riverside. Not the most visible player.

But the No. 10 has serious pro bonafides, and the fact that he was passed over reflects the lack of in-depth scouting available to most MLS clubs. Ochoa was immense this season, and he projects at a number of different positions, most likely as a second striker at the next level. But he can also play as a cutting-in winger or as a set-back playmaker depending on the system. At 6-foot-1, it’s hard to imagine his size was much of a hang-up, either.

D Eric DeJulio, Creighton: Sporting KC may be counting its luck that every other MLS team passed on DeJulio, one of its prized academy kids of yore. This was perhaps more surprising than most snubs because by most accounts, DeJulio performed well at the MLS Combine just a week before the draft. The disconnect between then and the time the picks came down is unsure, but it certainly wasn’t Creighton’s run. As the cornerstone center back for the Bluejays’ run to the Elite 8, there were few better at the position in 2015.

Go back and watch the job DeJulio did on North Carolina’s Omar Holness during a shutout victory in the NCAA tournament. He has sure feet and a blistering soccer IQ, and at 6-foot-2 he has the size to stand up to MLS attackers. In all honesty he’s better than the majority of center backs chosen in the draft, and if SKC - he played in the academy back to its Wizards days - has the roster space and needs to balance its internationals, DeJulio should be the first place it looks.

D Elias Gomez, Argentina: This is admittedly a stab in the dark, since Gomez was all but unknown until he showed up from Rosario (Messi’s homeland) to participate in the MLS Combine. Gomez, 21, has spent his entire career in Argentina, where his national team aspirations topped out at the U17 level. He has not played regularly but has played for the Rosario first team, and this is what should grab MLS clubs: he’s a left-sided player.

Gomez wowed talent evaluators in Fort Lauderdale with his pressing, overlapping style at left back, pushing ahead of his midfield to stab into the final third to create. That alone - a left back with the ability and desire to get forward - most likely had a number of MLS clubs turning an ear to find out what the player is all about. The bigger issue, though, was on the defensive side, where he showed some cracks in the foundation. There are, however, a handful of MLS clubs who value overlapping fullbacks to such a degree that Gomez can be an asset, at least as camp fodder. At this point in the process, it certainly couldn’t hurt.