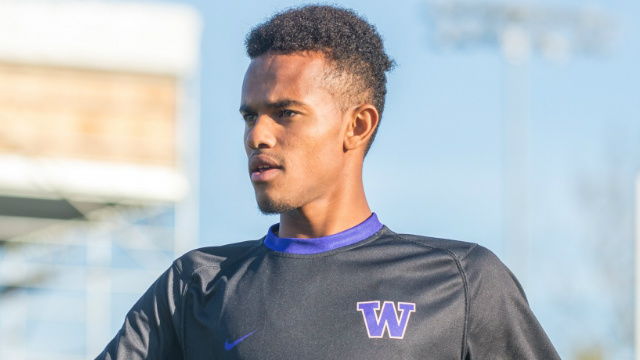 Sounders FC today announced that it has signed midfielder Handwalla Bwana as a Homegrown Player. Bwana comes to the Rave Green following a standout career at the University of Washington, where he was a two-time All-Pac-12 selection and the 2016 Pac-12 Freshman of the Year. The Sounders FC Academy product is set to join the First Team ahead of the 2018 Sounders FC preseason presented by adidas.

"We're excited to add Handwalla to our squad, giving us another dynamic young prospect from our Academy," Sounders FC General Manager & President of Soccer Garth Lagerwey said in a statement. "We would like to thank everyone in his development pathway who helped get him this far, including his coaches at Seattle United and Coach Jamie Clark's staff at the University of Washington. Big things have small beginnings, and it's now on us to continue that development process in the professional ranks."

Bwana, 18, spent two seasons at the University of Washington, starting 26 of 39 career appearances and recording 12 goals and 13 assists. The Ballard High School graduate tallied four goals and seven assists in 2016, earning All-Pac-12 Second Team and Pac-12 Freshman of the Year honors. He followed that up with an impressive sophomore campaign in which he led the Huskies with both eight goals and ranked second with six assists, earning All-Pac-12 First Team and All-Far West Region First Team selections. Originally from Mombasa, Kenya, Bwana moved to the U.S. and attended Ballard High School and played for Sounders FC Academy and Seattle United - a Sounders FC Academy Club Partner - prior to his time at Washington.