Rock Hill, SC – Both Charlotte and UNC Wilmington won both of their games at the Manchester cup while Old Dominion won their first game and drew their second.  This article will be about these 3 teams – at the Manchester Cup played here recently – the winners. The rest of the teams will be discussed in future articles.

Disclaimer:  In the spring, players change numbers, new transfers and incoming freshman start playing.  Rosters are not updated/nor provided.  I assume that I’m going to mis-identify some player because of this limitation.  Send me an email at mauceri@topdrawersoccer.com with the correct identification, if you uncover an error or omission.

Charlotte won the Manchester cup for the 2nd year in a row.  The 49ers return the vast majority of their 2010 starters and they continue to be well organized and prepared. 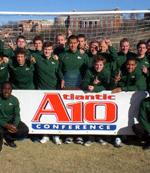 Aidan Kirkbride scored the lone goal against East Tennessee State in the 10th minute.  Evan James started the play crossing the ball to an open Kirkbride 5 yards from goal and Kirkbride buried the shot.

Donnie Smith opened the scoring early against Furman.  An aside: The clock was out on one field for the evening games – here’s what happened.  Between the day and evening sessions, a strong wind blew a Gatorade bottle into the radio-control for the scoreboard, breaking the antenna that was previously being held on with gum, string and masking tape.  Back to the game: On the goal, Smith hit a 15 yard shot that got past the goal keeper, before hitting a puddle, slowing the ball to a painful, slow, rolling ball finally crossed the goal line.  If the Furman defenders had not given up on it, they might have been able to stop it.

Kirkbride got his second goal right before half-time. The play started with a James corner kick that Charles Rodriguez headed square that Furman’s Nicky MacKain headed away from the goal.  Isaac Cowles struck the free ball from outside the box, but it was re-directed by Kirkbride.

James got on the scoreboard to all-but-end the game in the second half against Furman.  The Furman goal keeper turned over the ball to Smith who fed James who chipped the stunned goal keeper from the top of the box.

Charlotte made East Tennessee State look bad and made Furman look worse.  They were the class of the tournament.

Charles Rodriguez and Isaac Cowles may be the best senior center back duo in the nation.  Both are superlative in tracking the ball in the air, tackling with authority and maintaining the defensive shape.

Both of the starting forwards, Evan James and T.J. Beaulieu are undersized forwards.  After James burst onto the scene as a freshman, he hasn’t been as impressive for his last couple of years.  However, in this tournament, he seemed to play with more intensity.  He has good speed, but not exemplary.  James turned it on against Furman in the second half.  Unless he has an outstanding year however, I don’t think that he’ll be invited to the MLS combine.

Beaulieu has good skill and a surprising quick first step.  This kid has been crippled by the injury bug – it seems to strike him every year.  He had to leave the East Tennessee State match, because his stitches opened, bleeding all over the sidelines.  He’s a battler, starting against Furman in his “spirit of 76” bandages.  I feel for this kid.

The diminutive midfield dominates – led by Tyler Gibson and Donnie Smith. Gibson rocketed a shot that the Furman goal keeper was able to tip over the cross-bar.  Smith is a confident dribbler with a cultured left-foot.

When I watched Charlotte against George Washington last year with Cowles serving a suspension, Thomas Allen played a tremendous game at center back. I wondered how Allen would get minutes with 2 experienced center backs already manning the field.  Allen played right back and did well enough to be considered as a candidate in the fall.

Jennings Rex continues to be an enigma.  He seems to have sufficient talent to be in the forward equation.  With his height, he could be a valid option, but he seems to have regressed since his freshman year.  I wonder if his practice habits are lacking and it hurts him getting on the field.  It’s too bad – he could be critical, if he could force Coach Gunn’s hand by practicing hard, playing well and becoming a force when he gets his chances. Jennings accepted a pass from Smith in the East Tennessee State game.  Ignoring that his shirt was being pulled, he struck a dangerous low shot.

Charlotte could be a very good NCAA team with an experienced deep team – but they need to find a healthy goal scoring forward. If they can find a target in the box, they could become a sweet-sixteen team.

UNC Wilmington won both of their games, but were squeezed out of the championship by a single goal that they surrendered.  Nevertheless, they played very well – which is a little surprising given that UNC Wilmington has lost a few seniors. 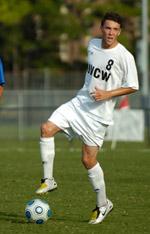 Daniel Roberts, UNCW
It was raining very hard at the beginning of this game which impacted my notes!

UNC Wilmington beat College of Charleston 2-1 in a come-from-behind victory.

Some player numbers were missing from the UNCW roster.

I didn’t see either of the 2 goals against College of Charleston, because I was focusing on Furman-NC State.  One goal was a penalty kick.  The first goal was scored in the 38th minute (remember 35 minute halves) and the second was in the 50th minute.

The first goal against South Carolina was scored by Thomas Driver from a brilliant pass from Andy McDaniel.  Driver hit a 35 yard shot that caught the goal keeper off his line with South Carolina not pressuring the shot adequately.

The second goal against South Carolina was scored by Jack Ward using a powerful left foot 6 yards from goal at an acute angle.

With the lead against South Carolina, UNC Wilmington seemed to lack urgency to continue to attack.  It’s a bad habit.

Daniel Roberts was moving very well on both sides of the ball.  He’s someone to watch in the fall.  He cracked a shot against College of Charleston in the 10th minute.  Roberts hit a dangerous 20 yard free kick in the 6th minute.

It seems that every time that I see UNC Wilmington, Brandon Miller is in goal.  Now, the only way that I’ll see graduated senior Brock Duckworth is with the Wilmington Hammerheads.  Miller is an athletic goal keeper, but is inconsistent.

Old Dominion won 1 and tied 1, but they played 2 of the weaker teams. They played well, looking better than I recall over the last several years. 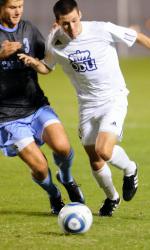 The lone goal scored was scored in the 31st minute by Gideon Asante.  The play started with a heady touch by TomVan Dyck to Andrew Smith who got the ball to Asante. Asante beat his man and fired a low hard shot with power and accuracy.  Prior to this goal, Old Dominion was peppering the goal with shots from all directions (well, I guess not from behind the goal).

Old Dominion is a very small team, but they are quick and combine with each other well.  Asante and Yannick Smith particularly combine well.

Chris Harmon is a good passer – I like that he keeps his head up – and a slick dribbler with a good motor.

Van Dyck is extremely calm on the ball, even when deep and pressured.  He’s someone to keep an eye on.

Alex De John is a good tackler – he was showed a soft yellow for a good tackle that I wouldn’t have characterized as a foul.

Goal keeper Michael Roura is a step down from former goal keeper Evan Newton.  Perhaps Roura will grow into the role, but I didn’t care for the way that he manned his box.