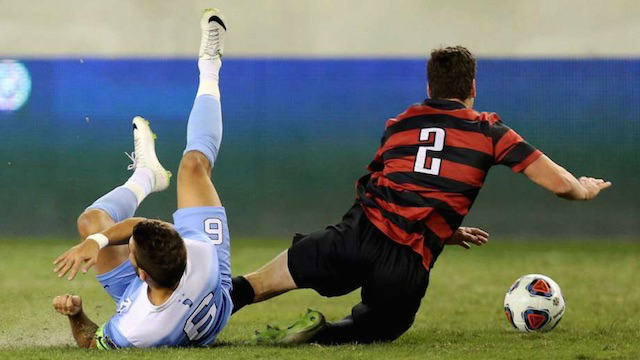 HOUSTON — At least from an on-field perspective, the College Cup semifinals here at BBVA Compass Stadium provided a little something for everybody.

The opener between Denver and Wake Forest was a roaring affair from the jump, shirking the long-held reputation that this stage promotes cagey affairs that rarely hit top gear. After both of last year’s semifinals ended in penalties following drab 110-minute regulations, Wake Forest’s Jon Bakero scored in the seventh minute and Denver had an equalizer through Andre Shinyashiki a mere nine minutes later. When Wake Forest’s Ian Harkes scored the winner in the second overtime, it fell in line with the match’s otherwise rollicking tenor.

The North Carolina-Stanford nightcap was a more subdued affair, but it still offered a fascinating enough tactical chess match between two teams with savvy head coaches. After a scoreless 110 minutes, penalties was a heart-pounding affair, as the teams combined to make 19 straight before North Carolina’s miss sent Stanford to a second consecutive title tilt.

The final, too, provides some tactical intrigue. The Demon Deacons, bolstered in part by D.C. United academy grad Ian Harkes, front a passing style of the game that wouldn’t be out of place in Catalonia. Stanford, meanwhile, plays the game with a somewhat more muscular mindset. The Cardinal prefer to throw numbers forward in coach Jeremy Gunn’s 4-4-2, overlapping fullbacks and pushing the midfield to draw a high line.

At least on paper, it’s a classic possession vs. counter game. Wake Forest will hoard time on the ball like a squirrel collecting acorns before the advancing winter. Stanford, which is aiming to become the first back-to-back DI men’s champion in 12 years, will look to kill the Demon Deacons in transition and show a lethal edge in the box. The NCAA could hardly have asked for a better matchup.

And yet many of the swirling storylines are pulling the attention off the field to more uncomfortable matters.

The College Cup’s format follows the weekend schedule every team uses during the season - the semifinals take place on Friday and the final on Sunday. But the College Cup is no regular scenario, and its crammed schedule jamming the three most important games in the nation into one weekend has come into heavier scrutiny each year. And this year is no different.

A multitude of coaches expressed their displeasure at the schedule, which forces teams to turn around after a semifinal and play the most important game of the year on about 36 hours rest. Factor in the fact that five of the last six College Cup semifinals went to extra time, and the emotional and physical drain is real. The resulting let-down often bleeds into the quality of the final.

Gunn is a vocal member of the committee to push the College Cup final out from the semifinal and create more space between the two. And it’s a decision he thinks can’t come fast enough.

“Most definitely (the schedule needs to change),” Gunn said. “There’s no question that when we look at how we do things, the game is past that. We’re better than that. The players deserve more. They go into the most exciting game of the year with that much time, and you think of any other game, any other sporting event, and most of the fun is the journey going up to it.

Sparse attendance at College Cup matches in recent years mixed with unpredictable field conditions have also drawn criticism. The NCAA listed attendance north of 6,000 for the semifinal, but it was an exceedingly generous count as swaths of empty seats abounded. And the BBVA Compass Stadium field, which the Dynamo recently had replaced as a knock-on effect from the floods in the area earlier this year, hasn’t had enough time to fully take root. The grounds crew filled in the splotchy areas with sand, which made the field a choppy, unpredictable surface in the best of conditions.

By the end of the second game, entire patches laid bare of grass and sand rooster-tailed noticeably behind kicked balls. For a team like Wake Forest, which prefers to play it along the ground, it’s impossible for the field to not play a role in the outcome in one way or another.

“I think we’ve just got to be a little bit more intelligent (with the surface conditions),” Wake Forest coach Bobby Muuss said. “It’s OK to try to play in behind. This is a group that obviously we take great pride in the brand in which we play, but we’ve said it all year, we can play off second balls. We took a lot of goal kicks (against Denver) that we don’t normally, and we have no problem playing off second balls.

“We just have to make sure we’re playing safer in the back with the surface. Maybe an extra touch. Better spacing, better movements, and just be OK that if we’re going to lose (the ball), just lose it and let’s not turn the ball over in front of us. We just don’t want to have self-inflicted wounds.”

The players certainly felt the effect of the surface. And whether or not the teams observers see on Sunday are appreciably different from the style of play both fronted during the season under optimal conditions, any shift in a match of this magnitude is significant.

“It was maybe a little bit of a frustrating aspect of the game (on Friday), but I think we can’t change anything,” Harkes said. “Maybe just being a little smarter with where we’re playing. (On Friday) we got caught a little bit playing around the box too much, and we can maybe just air it when we need to. So maybe just keep that in mind and make better decisions moving forward.”

Solutions to these issues perhaps aren’t easy to come by, especially when the NCAA as a governing body has shown so little interest in reforming the college game at the top. College Cup teams didn’t get any time on the surface before the match, so they were forced to adjust to its peculiarities on the fly. And as for attendance woes, those too are seemingly entangled in politics. Host sites bid for the right to host, and while establishing a dedicated site might seem like a good idea to give the tournament sturdier mooring, the NCAA might be reticent to move off its current bid format.

Sunday’s College Cup final will assuredly be one to remember on the field. Whether or not the NCAA is paying attention to the issues encircling the event off it is another matter entirely.