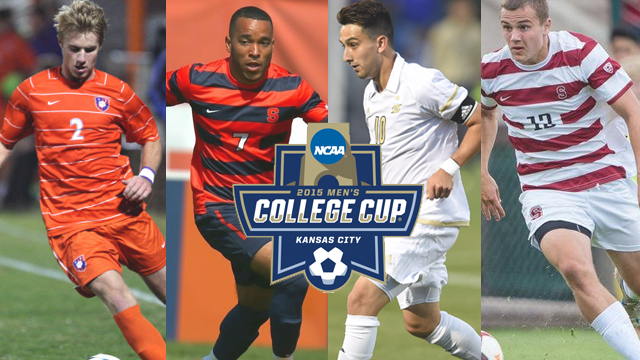 The College Cup has been slowly growing in stature in lockstep with the ascendance of soccer’s general place of relevance in this country. As the spotlight grew, so did the standard of play, and that’s never been more evident than it is in this year’s final four crop.

The College Cup semifinals kicks off at Sporting Park in Kansas City on Friday with a double-dip of action between Stanford-Akron and Syracuse-Clemson. All four teams like to keep it on the ground and play soccer to varying degrees, so this slate should bring the entertainment value.

Without further dithering, let’s get into the matchups themselves. Here’s what you need to know about both games entering this weekend’s frantic slate of action in Kansas City.

At least on paper, the setup to this game is relatively straightforward. Clemson has been lifted by its midfield in this tournament, and specifically by Brazilian Thales Moreno. The junior central midfielder has two goals and an assist in Clemson’s three tourney games, and that doesn’t include the steely winning penalty in the Tigers’ shootout victory over Maryland in the quarterfinals.

Between Diego Campos, Moreno, Paul Clowes and Oliver Shannon - not to mention a deep bench - Clemson has wood to burn in the midfield. Mix in T.J. Casner up top and Clemson will be assured in its approach of playing through its playmakers in lieu of going over Syracuse.

If Syracuse is honest with its gameplan, playing on the counter is probably the smartest route, even if it isn’t the sexiest. Clemson has the most lethally effective attack left in the field based on tourney results, and if Syracuse was to open its young, relatively untested back line to that stress early in the game, the Orange might not find a way back. A 3-2 game benefits Clemson. A 1-0 or scoreless match plays into Syracuse’s hands far more.

That doesn’t mean ‘Cuse will or should bunker. Virginia felt it had to resort to that tactic in the 2014 final because UCLA had it out-manned at just about every position. That isn’t the case here. Julian Buescher is one of the finest No. 10s in all of college soccer (his 11 assists are tied for seventh nationally), and Ben Polk can score with any forward in the college game.

But if Syracuse has a downfall in this tourney, it’ll be the youth of its defense. Two of its regular starters - Miles Robinson and Kamal Miller - are freshmen. They’ve proven they can do enough to keep good teams off the scoresheet in this tournament, but the College Cup is a different beast, and Syracuse has had by far the easiest path to KC. Freshmen have a way of cracking, even the good ones. That’s not to say Robinson and Miller will, but keep in mind Clemson likes to play a high line and stress defenses.

It’s difficult to see Syracuse emerging from this game unscathed. The ball tends to bounce in funny ways in the College Cup, but Clemson should have the run of possession, the edge in shots and has a more battle-tested defense. Expect the Tigers to exact a measure of vengeance from the ACC tourney.

With respect to a Clemson-Syracuse game that should be quite entertaining in its own right, this is the match to watch if you can only watch one.

It seems almost cruel that these two teams weren’t arrayed on opposite sides of the bracket, because they’d both be favorites in their respective games to advance to the final. The talking points at play in this matchup practically write themselves. Akron is back for the first time since Caleb Porter - a week removed from winning his first MLS Cup - took the Zips to the summit of college soccer in 2010. Stanford is led by Jordan Morris, who scored for the full national team against Mexico - Mexico - eight months ago.

Stanford has never won this tournament - surprisingly enough - and is back in the College Cup mixer for the first time since 2002. We’ll let the arguments over whether this is the most talented Stanford team of all time slide (for now), but rest assured that it has a prominent place in the pantheon. Morris is one of the brightest college talents of all time, and a handful of his teammates will be pros within the next two years.

Stanford’s midfield almost isn’t fair. Corey Baird is a whirling dervish pinching in from wide, while Ty Thompson and Eric Verso crater back lines with their interchange. The ability to bring an attacking luminary like freshman Amir Bashti off the bench in the second half is a luxury not many college teams can spare. Further, the defense is experienced and deep. Tomas Hilliard-Arce and Brandon Vincent are both professional locks, and keeper Andrew Epstein has played at least 1,700 minutes in three consecutive seasons now.

How does Akron counter all that talent? With a cornucopia of attacking ability all its own.

The only midfield more impressive than Stanford’s left is Akron’s. Richie Laryea and Adam Najem form the best one-two combo in college soccer - this is debatable of course, but watch the tape and we’ll talk - and Stuart Holthusen is a prototypical No. 9 with good feet and plus instincts. This Akron team does not have the star power of the 2010 team, but what it lacks in pizzaz it more than makes up for in passing ability.

This game is particularly interesting because neither team is likely to put away the sword and raise the defensive shield for 90 minutes. In the quarterfinal round, Stanford started strong against a Wake Forest team that played similar soccer as Akron, but the Cardinal faded possessionally and played on the break for the last 45 minutes or so. That’s probably the most likely outcome here.

Akron will probably win the possession battle 55-45, and the teams will most likely split chances in front of goal. With Morris running the show in the attacking third, Stanford doesn’t need a ton of oxygen from its possession to come up with cracks on target. From that perspective, this is nearly an impossible game to predict.

But predict we must. Akron overcomes Stanford’s dogged pursuit to meet Clemson in a rip-roaring finale full of full-blooded attacking soccer. We should be so lucky.