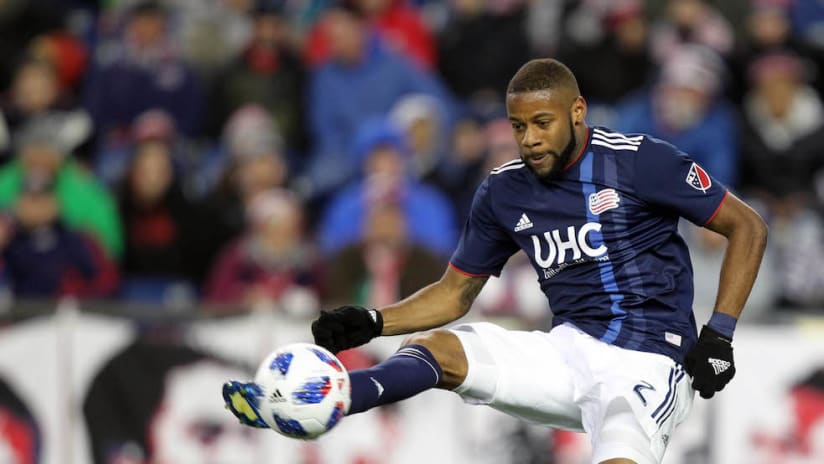 While the New England Revolution came up short in a quest for MLS Cup, the Bruce Arena-led side dominated the regular season. In 34 games, the Revolution picked up 73 points, posting a 22-5-7 record.

That’s far and away more than other teams, and it’s worth looking at just how Arena and the Revolution put the roster together. Of the 11 players to see the most minutes, eight played college soccer.

As MLS invests more in player acquisition and development – to mixed success – the Revolution embraced players with college experience. This despite the majority of teams not really engaged with the draft process. Of course, New York City FC’s success in the postseason can be pointed to as an alternative method to team building that leads to silverware.

The Generation adidas defender was selected by New England in the 2013 draft as the No. 1 pick. He played three seasons at Louisville, and has reached the 20,000-minute mark in the league.

An attacking player at Michigan State, Jones was the No. 11 pick in the 2019 draft. Converted to an outside back (left back) from a winger/forward in college, he appeared in 31 games this season.

Perhaps no player on the roster enjoyed a bigger breakout for club and country this season. Turner went undrafted after a four-year career at Fairfield, and was sent out on loan to the Richmond Kickers after signing with the Revolution in March 2016. Along with becoming the Revolution starter on the way, he earned 10 caps with the U.S. men’s national team this year.

The No. 8 pick in the 2018 draft out of Western Michigan, the right back hit the century mark this season in MLS.

The rare splashy signing for the Revolution, the Argentinian had 15 goals this season and 9 assists.

Another big-money signing, the Spanish midfielder scored 4 goals and had 18 assists.

After playing at SIUE over four seasons, Polster was picked No. 7 by the Chicago Fire in the 2015 draft. He spent time there and with Rangers FC in Scotland before the Revolution acquired him on transfer in July 2020.

The No. 6 pick in the 2020 Draft, Kessler just finished his second season and has already played in more than 50 MLS games. He spent three seasons at Virginia.

While the defensive spots on the field are anchored by a number of college veterans, Buska is the third international expected to fulfill the attacking roles. The Polish striker had 16 goals in 2021.

The longtime MLS veteran has eight seasons under his belt, with stops at Chivas USA, NYCFC and Houston Dynamo before joining the Revolution as a free agent ahead of this season. He played four years of college soccer at Brown before he joined Clemson for a fifth year. He was drafted by Chivas USA in 2014.

Emerging as a regular for the Canadian men’s national team, Buchanan was another savvy pick by the Revolution at No. 9 in 2019 MLS Draft. Earlier this year he was transferred to Club Brugge in Belgium, where he’s slated to join in January.

Former Akron forward Teal Bunbury played in 29 games, just north of 1,100 minutes…Jon Bell (UMBC) made 12 appearances as an outside back…Backup goalkeeper Brad Knighton is a longtime MLS vet out of UNC Wilmington. He originally joined the Revolution as an undrafted free agent in 2007, before bouncing around the league, rejoining the team in 2014…Another veteran of the league, A.J. DeLaGarza (Maryland) signed with the team in 2021. He made 10 appearances this season…Ema Boateng played one season for UC Santa Barbara before turning pro back in 2013. This season, he served as an attacking sub…First-round draft pick in 2021, Edward Kizza managed to make 11 appearances…Originally a Revolution Homegrown signing back in December 2012 out of Akron, Scott Caldwell remained a depth player this season. He’s now a free agent in MLS.