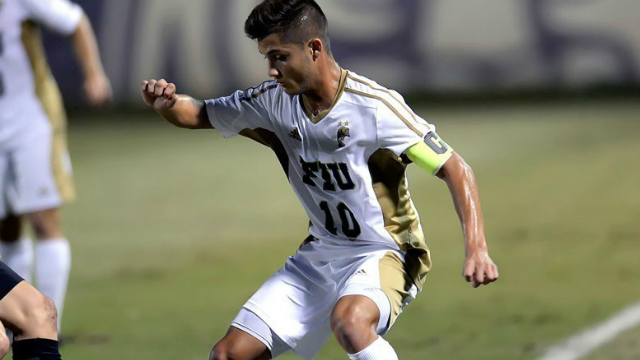 Entering the final match of the Conference USA quarterfinals on Wednesday, it seemed like all the top seeds would play on to the next day. Charlotte jumped out to a 1-0 lead against the No. 7 seed Marshall, ready to become the third top seed to win on the day.

Rimario Gordon answered two minutes later for the Herd, and goalkeeper Dominik Reining stood on his head, making eight saves to send the game to penalty kicks. There, Marshall’s success continued, as a 5-3 penalty triumph secured progress to the semifinals.

Freshman forward Bjorn Gudjonsson led South Carolina to its 1-0 victory over New Mexico, as the attacker netted the lone goal of the game in the 78th minute. Waiting for the Gamecocks in the next round will be Marshall.

Florida International was the third team to progress, defeating Old Dominion 4-2 in a back-and-forth, high-scoring battle. Goals from Daniel Gonzalez and Luis Betancur staked FIU to a 2-0 lead, though it was short lived. Josue Henriquez cut the lead in half before the half, and a minute into the second half, Ryan Condotta equalized from the penalty spot.

In the 68th minute, FIU edged back in front for good. Gonzalez headed home  a Patrick Lopez pass, before Jamar Campion-Hinds iced the game with eight minutes left.

The relatively new ACC Tournament format didn’t do the higher seed any favors on Wednesday.

Notre Dame and Syracuse both advanced to the ACC final with road victories. The suffocating Irish defense did enough to bottle up the dynamic Wake Forest attack, and a 60th minute goal from freshman Thomas Ueland did the job for Notre Dame.

Despite getting outshot 15-8, Ben Polk made sure the Orange won where it counted against Clemson. The junior transfer netted a goal in each half as Syracuse topped the Tigers by a 2-0 score line.

Ahinga Selemani’s 78th minute goal propelled the Gauchos past UC Davis and into the Big West title game, in a close affair with little separating the two sides.

UCSB will host Saturday’s championship against Cal State Fullerton after the Titans took care of business against Cal Poly on Wednesday. A goal from Julian Okai and a brace from Diego Sanchez overturned a one goal deficit into a 3-1 victory for Fullerton.

Last year's College Cup squad UMBC couldn't fashion its knockout heroics in this year's America East tournament, falling on the road at Vermont by a 2-1 score. Brian Wright's 48th minute tally opened the scoring for the Catamounts, only for Retrievers star Michael Scott to net the equalizer from a free kick. Neither side managed to break the deadlock until overtime, when Wright's pass found Bernard Yeboah in the third minute of the first overtime to send Vermont through to the final.

Vermont's foes in Saturday's championship is Binghamton, after the Bearcats triumphed in an all-New York matchup, topping Albany 1-0 on the road. Logan Powell's 80th minute goal provided the winning margin.