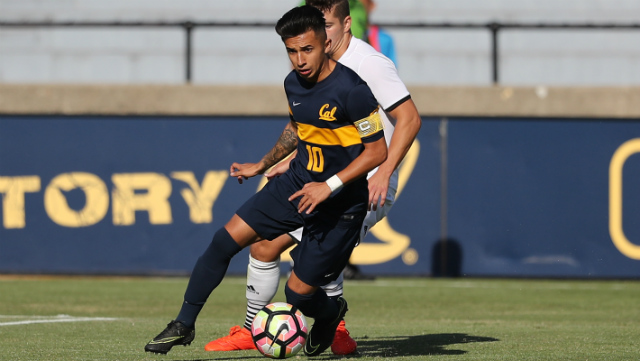 The men’s Division I NCAA Tournament begins on Thursday with 16 first round games.

MORE: Pro prospects in the first round | Men's DI bracket

Preview and check out the TDS predictions below.

A dream season for UMass rolled right into Sunday, as the Minutemen took care of business in the Atlantic 10 tournament final. They host Colgate to kick off proceedings, as the back-to-back Patriot League tournament champs have shown a knack for getting hot at the right time. Senior midfielder Jared Stroud is a key figure for the team’s attack, as he dished out 11 assists, including two in a 3-2, come-from-behind win in the Patriot League semifinals against Loyola (MD). Freshman Davis Smith continues to be a handful, and he makes UMass dangerous in the first round and beyond.

The Bay Area hosts a first-round clash between two local sides when the Dons head to Berkeley. Cal is back in the tournament after a few down years for the program, finally nabbing an at-large berth. They don’t score too many goals, but are stingy at the back, as sophomore Drake Callender has stood on his head on more than one occasion. San Francisco overcame a sluggish start to the season, before spinning off six straight wins to capture the WCC regular season title and auto bid. Sean Bowman, Leon Schwarzer and Santiago Digiuseppe keep things ticking over in the midfield and final third for the Dons.

Despite coming up short in the Ivy League title race, Columbia was rewarded with an at-large bid after a two-loss season. Senior forward Arthur Bosua’s 12 goals was a big part of that, as he finished with 29 points on the campaign. It’s a clash between two prolific strikers, as William & Mary’s Antonio Bustamante has seven goals in his last three games, boosting his season total to 15. Whichever forward can find time and space could end up providing the difference.

The Big East regular season champs will like their odds of a deep run in the NCAA Tournament, given that they boast Eric Dick, one of the nation’s top GKs, and enough scoring to pip most close games. Another big year from Brandon Guhl’s supplied most of the goals, and the Bulldogs will welcome Lipscomb to town. Lipscomb’s success has been led by the Ivans, as Ivan Sakou and Ivan Alvarado have combined for 12 goals and 7 assists. That’s complimented by Logan Paynter, and that combination will look to lead the Bison attack to a road upset.

Riding its way to the Southern Conference tournament crown on penalty kicks, Mercer is one of a handful of unfancied sides looking to create havoc in the NCAA Tournament. Will Bagrou is a reason to believe in them, as he’s a pesky, athletic presence that can create problems for opposing back lines. Mercer will have its hands full, as Coastal Carolina’s Frantzdy Pierrot doesn’t have the same kind of scoring rate as Bagrou’s 12 tallies, but he’s a force to handle nonetheless.

Clamping down at this point of the season paid off in a big way for Presbyterian, which won both the semifinal and final of the Big South tournament on penalty kicks. The Blue Hose will be making its first NCAA Tournament appearance, and can thank goalkeeper Connor Behrend for helping the team punch its ticket. Shutting down UNC Wilmington is the next task, as the Seahawks earned their second at-large bid in the last four years. Senior forward Julio Moncada’s been limited this season, with Phillip Goodrum picking up some of the slack. Both are key in this clash as UNCW’s offense looks to take control and secure progress to the second round.

It’s a New York derby in this first round clash, as the Brooklyn side travels to the Bronx for what should be a very close clash. Despite falling in the Atlantic 10 tournament, the Rams did enough to punch their ticket. Possessing a solid defense, backstopped by goalkeeper Rashid Nutu, Fordham’s attack runs through brother Janos and Jannik Loebe. St. Francis Brooklyn’s taken over the NEC, winning four of the last five conference titles. Blending European and domestic talent. Ali Tounakara led the Terriers with eight goals, while Dominick Falanga added seven.

The Summit League champions make the trip to South Florida, aiming to slow down one of the best attacking teams in the country. While FIU fell short of a Conference USA tournament title – losing its first game of the season against Charlotte in the tourney – the Panthers have the firepower to go on a deep run. Santiago Patino leads the way, tied for third in the nation with 15 goals. Paul Marie and Marvin Hezel provide experience and steel at the back. Omaha will be no pushovers, of course. Besting Denver on penalty kicks to claim an automatic bid in the tournament, the Mavs have scoring options of their own. Elvir Ibisevic led the team with nine goals, while Xavier Gomez contribute eight assists along with his five tallies. A high-scoring match favors the home side, though each team will like their chances.

After winning its first-ever WAC regular season title, Air Force punched its NCAA Tournament ticket via an at-large bid. This matchup will provide an intriguing litmus test of the ACC’s true quality, as the Hokies earned a bid despite a rather underwhelming record. ACC First Team selections Ben Lundgaard (goalkeeper) and forward Marcelo Acuna give the Hokies hope of winning not only their first-round game, but also replicating last year’s run to the quarterfinals. Forced to go on the road, Air Force will turn to its stalwarts like Tucker Bone, Oscar Chacon and John Wendt.

Unbeaten through the first 13 games of the regular season and seemingly destined for a high seed, the wheels came off for Maryland since October. Losers of five straight, all at home, the Terps still made the tournament, but face a tough task against the America East champions. Senior forward Afonso Pinheiro has been one of the conference’s best attackers the last four seasons, and he’ll look to leave his mark at Ludwig Field. Pinpointing Maryland’s issues has been tricky. A 1-0 loss to Georgetown back on October 17 triggered the team’s losing streak, and they’ve struggled to both score goals and keep the ball out of their own net. A big game is needed from the likes of Gordon Wild, Eryk Williamson and Jake Rozhansky.

Goals are likely to be hard to come by in this clash in New Hampshire, as the home side’s impressive defense helped it to make the tournament. Robin Schmidt’s six goals lead the team, while Willis Griffith and Josh Bauer strengthen the spine of the team. Fairfield’s defense ensured that the Stags needed just one goal to win the MAAC tournament, as they won the semifinals on penalty kicks after a 0-0 draw, and then edged Rider 1-0 to clinch it.

The final team to earn an at-large bid, NC State’s youth movement paid off thanks in part to its ability to get results in big games. Winning on the road at Old Dominion in the tournament is the team’s next task, as the Wolfpack will turn to star freshmen like David Loera, Manny Perez and Leon Krapf to keep its season rolling. The Monarchs are playing extremely well right now, winners of four straight, including three of those in the CUSA tournament, all without conceding a goal. They can get goals from anywhere, whether it’s Brandon Perdue, Max Wilschrey, Sebastien Hauret or Niko Klosterhalfen. One goal might be enough in this one.

The transfer of Jesus Perez from Akron was one of several boosts for UIC, as it emerged from the Horizon League tournament as champions. Facing Wisconsin is going to be no small test, as the Big Ten side has held its own against Michigan, Indiana and Maryland this year. Forward Chris Mueller is Wisconsin's go-to player in the final third, although Marc Segbers tends to enjoy the space Mueller creates for his teammates. This should provide one of the more entertaining matchups of the first round.

The nation’s top scorer plays on a sub .500 team in the Missouri Valley Conference. However, Niklas Brodacki and Central Arkansas are dancing, and his 17 goals on the year surely will make them a threat. Playing on the road at SMU and coming away with anything is a massive test for a side that lost a preseason exhibition to the Colorado School of Mines. Sophomore forward Garrett McLaughlin showed that his freshman season was no fluke, scoring 13 goals to nab the American Athletic Conference Player of the Year award. SMU has the defensive makeup to claim some wins against ranked opponents, as their defense is also anchored by senior Jordan Cano.

Perhaps the laziest first round matchup generated by the NCAA Committee (that’s not to say the Huskies don’t deserve at at-large bid) should also provide an entertaining clash in Seattle. The Huskies couldn’t mount a Pac-12 challenge, butdid just enough to earn a spot. Midfielder Blake Bodily earned Pac-12 Freshman of the Year honors, and when him or Handwalla Bwana are making things happen, Washington can be a real handful. Along with keeping their season alive, this is a revenge game for Seattle, as they lost 2-0 earlier in the season at home turf to their local rival. Alex Roldan, Medo Youssef, Cody Gibson and Sergio Rivas all accounted for at least five goals, providing a number of different options in the final third.

Penalty kicks were needed for Cal State Fullerton to emerge from the Big West this year, and the Titans travel to Pacific seeking to best their California foe. Ross McPhie and Samuel Goni combined to score 16 of Fullerton’s 26 goals this year, and slowing them down will be the target for Tristan Blackmon and the Pacific defense. Wouter Verstraaten is another key force at the back, while the bulk of Pacific’s offensive push stems from Tariq Branche, Camden Riley and Anthony Orendain.